Ottawa is urging Iran to allow an Iranian-Canadian woman to leave the country after her husband's mysterious death inside a Tehran prison, and one of the couple's sons spoke through tears at as he recalled having to leave his mother behind.

Maryam Mombeini was barred from leaving Iran on a Canada-bound flight with her sons Ramin and Mehran Seyed-Emami on Thursday. The family decided to flee after facing harassment, threats and smear campaigns over their rejection of Iranian authorities' claim that their husband and father Kavous Seyed-Emami, a Canadian-Iranian professor, died by suicide in prison. Ramin cried as he described the moment he and his brother had to leave his mother in Tehran.

"She just wanted us to be safe and on that plane. She said, 'I just want you guys to be safe and away from this horrible place. And no matter what happens to me, don't ever come back,'" Ramin told reporters after landing at the Vancouver airport Thursday.

Foreign Affairs Minister Chrystia Freeland said the Canadian government is "outraged" that Ms. Mombeini was blocked from leaving Iran for "no apparent reason."

"We call on the government of Iran to immediately give Maryam Mombeini, a Canadian citizen, the freedom to return home," Ms. Freeland said in a statement Thursday.

Ramin said Iranian authorities confiscated his mother's Iranian passport at the airport. He said she is "fine" now but has friends with her at all times in Iran.

Despite weeks of intimidation from Iranian authorities, Ramin said his family is not backing down.

"They are trying to prevent us from rebuilding our lives. Needless to say, the emotional damage and distress that we've endured are beyond comprehension. To separate my mother from her two sons at such a crucial time is inhumane … But we will not be silenced."

Prof. Seyed-Emami, 64, died in Tehran prison following his arrest on allegations of spying at the end of January. His family's request for an autopsy was denied. He taught sociology at Imam Sadegh University in Tehran and conducted environmental research as managing director of the Persian Heritage Wildlife Foundation.

Ramin said his family is grateful for the Canadian government's support through their ordeal – particularly from Ms. Freeland, who called his mother after she was barred from boarding the plane in Iran on Thursday.

"The foreign minister herself called her, which was a very respectful gesture, and to give comfort to my mom that she's going to be fine," Ramin said.

Ms. Freeland's Parliamentary Secretary Omar Alghabra greeted the Seyed-Emami brothers at the airport. He said the government is using all diplomatic channels at its disposal, including through the Canadian mission at the United Nations, to push for Ms. Mombeini's return to Canada. Ms. Freeland has also asked to speak directly with her Iranian counterpart, Mr. Alghabra said.

Speaking on condition of anonymity, a senior government official said Italy has also assisted Canada on the Seyed-Emami case. Since Canada closed its embassy in Iran in 2012, Italy has served as its protecting power in the country.

Omid Memarian, a New York-based Iranian journalist who was once held in the prison where Prof. Seyed-Emami died, said Iran has taken Ms. Mombeini "hostage" by barring her from leaving the country. Speaking from his experience in Evin prison, he questioned the Iranian government's claim that the professor died by suicide.

"It's impossible that they will let you commit suicide because they constantly check on you. They don't give you anything that you can hang yourself from," Mr. Memarian said.

The New-York based Center for Human Rights in Iran said Canada should lead the calls for Iran to allow an independent, UN-led investigation into the cause of Prof. Seyed-Emami's death.

Ms. Freeland said the government will continue to demand answers from Iran on the circumstances surrounding the detention and death of Prof. Seyed-Emami. Opinion
Canada must keep up pressure on the Iranian regime
January 26, 2018 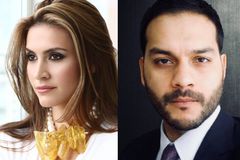 Follow Michelle Zilio and Sunny Dhillon on Twitter @michellezilio @TheSunnyDhillon
Report an error Editorial code of conduct
Due to technical reasons, we have temporarily removed commenting from our articles. We hope to have this fixed soon. Thank you for your patience. If you are looking to give feedback on our new site, please send it along to feedback@globeandmail.com. If you want to write a letter to the editor, please forward to letters@globeandmail.com.
Comments are closed