Danielle Smith, the Wildrose Party's rookie leader, is prepared to dismantle key parts of her election platform after Albertans kept her right-wing party from forming government.

The list of policies she is willing to reconsider were some of the most divisive issues in the 28-day campaign. And while softening her party's stance on a number of social issues may convince some voters to warm to Wildrose, she risks upsetting the conservative voters who gave her enough power to take over as Alberta's Opposition Leader.

"You can only govern with a mandate from the people, and if the people aren't interested in going a certain direction, you have to be the one to change," she said in an interview Tuesday. "You have to be the one to modify your policies to be able to fit where Albertans are. … There are clearly some policies that cause them some pause, cause them some concern. And we have to address those."

The party must revisit its policy on conscience rights, its desire to set up an Alberta pension plan and establish a provincial police force. Wildrose's environmental stance also needs to be reviewed, she said.

"I think we have to revisit our position on climate change and whether or not Albertans want to see a more comprehensive policy to deal with greenhouse gases," she said. During the election, Ms. Smith said the science around climate change is not settled.

"All of those things came up and created some concerns for people in the last couple of days of the campaign," she said.

She also wants her party to debate whether to maintain its policy on the Edmonton City Centre Airport. Wildrose wants to keep it open, arguing it is necessary because it services patients airlifted from the northern part of the province. This put her at odds with Edmonton's mayor.

Ms. Smith has consistently criticized Alison Redford, who leads the Progressive Conservative Party and won a solid majority Monday, for rewriting the PC playbook to appeal to Liberal and New Democratic supporters. Should Wildrose make substantial edits to its policies, Ms. Smith could alienate the voters she has secured, as well as the candidates who won their ridings based on the existing framework.

"I don't think they are going to rejoice in this policy direction," said Keith Brownsey, a political studies professor at Calgary Mount Royal University. "She stands the risk of alienating her political base."

Despite Ms. Smith's willingness to ditch some of Wildrose's right-wing policies, she does not think her party will reconcile with the PCs.

"No. I don't think so," Ms. Smith said. "I think Ms. Redford made that pretty clear herself. She said she couldn't work with the Wildrose."

The PCs won 61 seats, compared to 17 for Wildrose, 5 for the Liberals, and 4 for the NDP. Ms. Smith does not think her party will be able to influence government policies from its position inside the legislature, accusing the PCs of diminishing the role of legislature with abridged sessions, ramming through bills, and other shortcomings.

"The legislature is not the only place to represent Albertans," she said. "If they don't want to face us in the legislature, we'll have the debate directly with Albertans."

Wildrose will press the government the next four years by debating in newspapers, town halls and coffee shops.

Ms. Smith, who argues the foremost priority of the government should be balancing the books, believes she can find common ground with the Liberals and the New Democrats. But so far, she's unable to see any middle ground when it comes to the PCs.

"Nothing so far," she said. 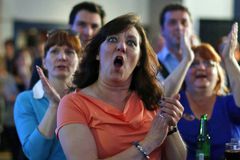