The federal government is being urged to reach back in history for a made-in-Canada solution to its fighter jet woes by resurrecting the legendary but aborted Avro Arrow interceptor to serve as this country's next war plane.

It may seem a far-fetched idea but backers – including retired major-general Lewis MacKenzie – insist that a revised version of the 1950s jet, with an upgraded engine, would outperform Ottawa's preferred choice on several important counts.

The revive-the-Avro campaign is the latest bizarre twist in a military purchase that's gone awry on the Harper government's watch.

The Conservatives, embarrassed by the rising costs of the U.S.-designed F-35 Lightning jets that the Royal Canadian Air Force sorely wants to purchase, are currently rethinking options for a next generation fighter.

Mr. MacKenzie and a group of design, engineering and logistics experts are pressing Ottawa to consider the long-discarded CF-105 plane.

The Diefenbaker government famously cancelled the Avro Arrow project in 1959, ending work on a Canadian aerospace marvel that supporters called the most advanced aircraft of its time.

Many in the Canadian aviation community never forgave Ottawa for scrapping the sleek, white plane, particularly after the government went on to buy U.S.-made Voodoo jets instead.

Proponents of reviving the Arrow are shopping a proposal around Ottawa that promises 120 planes for $9-billion, a number that just happens to be the government's original cost estimate for the increasingly expensive F-35 jets.

Each new CF-105, they say, would cost $73-million to produce – a homegrown solution that would also create a domestic supersonic jet manufacturing capacity.

It's hard to imagine a 53-year-old plane could outperform Lockheed Martin's costly new F-35 fighter-bomber, but those behind a new CF-105 say their jet would pack a 21st-century punch.

Mr. MacKenzie said the proposal he's put before the Harper government is for a made-in-Canada plane that could fly twice as fast as the F-35 and up to 20,000 feet higher. It would feature an updated Mark III engine and its range would be two to three times that of the F-35.

The former soldier, an unpaid supporter of the project, has run the pitch by Defence Minister Peter MacKay, senior defence officials as well as the Prime Minister's Office and Julian Fantino when he was associate defence minister in charge of procurement.

Mr. MacKenzie said he's met resistance in Ottawa, where officials insist they want the stealth capabilities that the F-35 can provide. Supporters of bringing back the CF-105, however, say the updated Arrow's capabilities would make up for this because it could fly so much higher and faster.

"[It] didn't make a lot of sense to me," said the official, who spoke on condition of anonymity.

Marc Bourdeau, a former Canadian public servant spearheading the CF-105 proposal, rejects the notion this is a pipe dream.

Mr. MacKenzie said the new CF-105 would look like its predecessor but comparisons would end there.

"We are talking about a basic design that was tested and proven .… It will be recognizable in shape but it won't be recognizable beyond that, given new technology and materials."

Mr. MacKenzie, who is disappointed by the F-35, and in particular its capacity to intercept threats, said backers are taking their proposal to Canadians to see if there's public pressure that can be brought to bear on the Harper government.

What the Avro Arrow should have taught Ottawa about the F-35
April 5, 2012
Vet considers Toronto's imperilled air museum a monument to war heroes
November 8, 2011 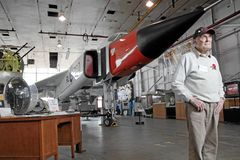