Ontario Premier Kathleen Wynne is girding for a legal battle with Opposition Leader Tim Hudak, saying he must take back accusations she was involved in the destruction of documents or face the full weight of the law.

In a notice of libel made public on Monday, Ms. Wynne accuses Mr. Hudak and his Progressive Conservatives of defaming her "with malice" at a press conference and on a party website. One Tory MPP is named in the notice for a Twitter comment comparing the Premier to Richard Nixon, the U.S. president who resigned in disgrace over the Watergate scandal.

"I would hope that he would take action to retract and remove all of the allegations that he's made. We've triggered a legal process that will unfold," Ms. Wynne said after a speech at an Italian seniors' centre in Toronto. "We have made very specific requests, and my hope is that he will comply with them."

Mr. Hudak has softened his language in recent days – scrupulously avoiding repeating his most controversial comments – but Ms. Wynne said nothing short of a full apology will do. She also wants his original statements scrubbed from the Tories' website.

But the PC Leader refused to retract his words.

"No, no, of course not," he said when asked on Monday if he had gone too far in his attacks on the Premier. "I've got a job to do … and we're not going to be intimidated by a series of angry letters coming from Kathleen Wynne and the Liberals."

A notice of libel – which Ms. Wynne's office would not release until The Globe and Mail obtained it elsewhere – details the substance of her case against Mr. Hudak.

In the 18-page document, Ms. Wynne's lawyer accuses Mr. Hudak and Tory energy critic Lisa MacLeod of making several "false and defamatory" statements about the Premier in a news conference, in a media release and on Twitter on March 27, the day an Ottawa court unsealed police documents accusing former premier Dalton McGuinty's chief of staff of orchestrating a plan to purge government records.

The libel notice also cites a comment Ms. MacLeod made on Twitter on March 27, after Ms. Wynne's news conference, at which the Premier sought to distance herself from the alleged purging of records in her predecessor's office.

"Watching the news. Got to see the Kathleen Wynne 'I am not a crook' Richard Nixon impression during her 3rd press conference again," Ms. MacLeod tweeted.

Ms. Wynne's lawyer, Mark Freiman of Lerners LLP and a former deputy attorney-general, said the tweet alleges Ms. Wynne is a "crook," is engaged in a "cover-up" and is "as deserving of hatred and contempt as Richard Nixon."

All of these statements are untrue, says the notice, dated April 4 and delivered to Mr. Hudak and Ms. MacLeod.

"The statements were made with malice," the notice alleges. "They constitute a libel against the Premier."

Police investigating the document destruction have said there is no evidence Ms. Wynne took part. The investigation is focused on Mr. McGuinty's staffers.

"I want to be able to debate matters of fact," Ms. Wynne said. "I've been clear that the allegations that were made by the leader of the Opposition were very disturbing, and so we have taken that action so it will unfold as part of the legal process."

The next step is to file a statement of claim, which would specify what damages Ms. Wynne is seeking, with the courts. This would formally begin the litigation. 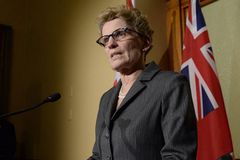 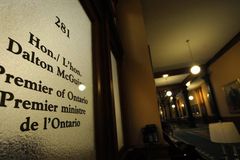 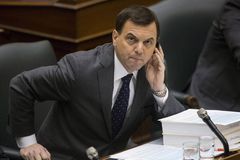