A skirl of bagpipes heralded the arrival for battle of Rowdy Roddy Piper, a kilt-wearing trash talker whose repertoire in the wrestling ring included such felonious tactics as eye poking.

The notorious villain, whose boy-next-door looks belied a wicked tongue and a heart filled with malice, became one of best-known wrestlers of his time. A bombastic and entertaining loudmouth who was not above relying on foreign objects or folding chairs to overcome his rivals, Mr. Piper's charisma took him from small-town hockey rinks in Manitoba to New York's Madison Square Garden as one of the first stars of the WrestleMania series.

Mr. Piper, who died of a heart attack on July 31 in his Hollywood home at the age of 61, boasted that he entered the ring for more than 7,000 professional fights. Hot Rod, as he was also known, was a central figure in the renaissance of pro wrestling in the mid-1980s, as the choreographed sport introduced storylines that included characters from the worlds of television and pop music.

"One night, I knocked out Mr. T, kicked Cyndi Lauper, chased Dick Clark back to his locker room and slapped Little Richard," he told a reporter last year.

Mr. Piper served as a foil to Hulk Hogan, wrestling's biggest star, appearing alongside his nemesis in Saturday-morning cartoons and on children's plastic lunch pails, becoming a pop-culture figure in his own right.

The villainous cheater of the wrestling ring showed great versatility as a movie actor, a standup comedian, a one-man improv performer, an MTV veejay, a soda pitchman and a pop singer.

His acting credits include dozens of action films and television movies, and he is perhaps best remembered for his starring role in John Carpenter's 1988 dystopian science-fiction feature, They Live. His character, an everyman drifter, discovers the ruling classes are alien robots. He confronts them in a bank while armed with a shotgun. "I have come here to chew bubblegum and kick ass. And I'm all out of bubblegum," he announces before firing his weapon. Mayhem ensues.

Billed in wrestling promotions as hailing from Glasgow, Scotland, Mr. Piper's true origins delighted a generation of Canadian children who were thrilled to learn that the cheating, hair-shaking monster was one of their own.

Roderick George Toombs was born on April 17, 1954, in, Saskatoon, to Eileen (née Anderson) and Stanley Toombs, a railway police officer who served with the CN Police. The boy lived a peripatetic childhood in Quebec, Ontario and on the Prairies, including stints in Dauphin and The Pas in Manitoba.

His teen years were tumultuous; he claimed that troubles at home led to his sleeping at youth hostels and on gymnasium floors from an early age. "I ran out of tears when I was 14," he once told the Winnipeg Free Press. He attended Windsor Park Collegiate in Winnipeg, though by his own admission his academic studies were secondary to his keen interest in boxing and playing the bagpipes. In 1971, he helped his Winnipeg school district win an invitational amateur wrestling tournament by emerging as champion of the 165-pound division.

In later years, he claimed his first professional bout happened by accident when he was asked, at age 15, to fill in on an undercard for a wrestler who failed to show against Larry (The Axe) Hennig. He risked his amateur status by entering the ring, but the promise of a $25 payday proved a greater lure.

"I had never seen a match before," he told the Portland Tribune last year. "I went to play my bagpipe. I was wearing [a] kilt. The announcer didn't know who I was. He just knew my first name was Roddy. So he said, 'Here comes Roddy the Piper.' Shortest match in the history of Winnipeg Arena – 10 seconds. Broke my nose."

(Mr. Piper's anecdote was likely a bit of promotional hullabaloo; the bout occurred in 1974, nine days after his 20th birthday, when he suffered an inglorious defeat at the hands of The Axe in a battle lasting less than two minutes.)

The young man had found his calling, and his shtick. He would wear tartan shorts or a kilt and fight as an angry, half-mad Scotsman. In his earliest appearances, he entered the ring after tossing dandelions into the crowd like rose petals, angering the crowd.

In those days, promoters worked certain territories with wrestlers sharing motel rooms to save costs, a hardscrabble life more similar to being a carny than an athlete. Promoter Al Tomko added Roddy Piper as an opening fighter expected to grapple for 20 minutes on cards scheduled to last three hours. He was a "jobber" – paid to lose.

After a few years working the prairie circuit, Mr. Piper moved to California, where he was trained by Judo Gene LeBell, a former wrestler who called himself "the godfather of grappling." At 6-foot-2, a scrawny Mr. Piper would eventually fight at a billed 230 pounds. While engaged in Mr. LeBell's promotions at the Olympic Auditorium in Los Angeles, Mr. Piper began to perfect his Rowdy character. His most notorious stunt was to insult a popular family of Mexican-American wrestlers. He announced he would make amends by playing the Mexican national anthem on his bagpipes. Instead, he played La Cucaracha. Mayhem ensued.

He tasted success as a "heel," a wrestling bad guy, as he fought in rings from the Pacific Northwest (as the Masked Canadian) to the American South.

Outside the ring, Mr. Piper battled with promoters. His demands for payment, or a better storyline, led to his being blackballed by regional promoters more than once. He learned to be self-sufficient. "You can pretty much strip me naked, drop me off in any city and I'll find my way out," he once told a weekly newspaper in Portland, Ore. "I learned the rules – like, never carry a dull knife or an empty gun, 'cause both'll get you in trouble and neither will do you any good."

In 1984, he was hired by the World Wrestling Federation (later World Wrestling Entertainment, now WWE) to be a manager, as well as a commentator on an interview segment called Piper's Pit. Racial taunts were used by him as part of the unsubtle marketing of wrestling. In one episode, Mr. Piper filled the set with bananas, pineapples and coconuts to welcome Fijian grappler Jimmy Snuka, only to wind up insulting his Polynesian heritage before conking him over the head with a coconut. More mayhem ensued.

The WWF steamrolled the old economics of wrestling by relying on then-new technology, such as video, while also creating syndicated programs and annual pay-per-view specials called WrestleMania. Mr. Piper teamed with Paul Orndorff in a tag-team match against Mr. Hogan and Mr. T in the inaugural WrestleMania in 1985. The next year, Mr. Piper boxed Mr. T, and he appeared in several starring and guest roles in the annual show. Such antics, even as a bad-guy loser, made the Canadian world famous.

He continued wrestling on an irregular basis, more recently on independent circuits. He became a entrepreneur in Portland, where he co-owned a wrestling promotion company, lent his name to a bubblegum-flavoured soft drink called Rowdy Roddy and owned small businesses such as Piper's Pit Stop Transmission Center. In 1992, his pop love song, I'm Your Man, was released in the United Kingdom, as was an accompanying video. He also appeared in Ms. Lauper's music videos.

Mr. Piper suffered untold concussions in his time in the ring, as well as a dizzying array of lesser injuries. He claimed to have been stabbed three times by angry wrestling fans over the years, and made it a habit to sit in public with his back to the wall.

In 1991, he joined Mr. Hogan and three other pro wrestlers in telling a U.S. federal jury they had purchased anabolic steroids from a Pennsylvania doctor, who was subsequently convicted. The wrestlers were not charged because using the muscle-building drugs was not a crime at the time they admitted receiving the drugs.

In 2006, Mr. Piper was in hospital to be treated for a bone chip in his hip when a doctor spotted a swollen lymph gland. He was diagnosed with lymphoma and underwent chemotherapy. "It seems like I have been fighting someone, something, someplace, in some manner, my whole life," he said at the time. "But this fight is one I am gonna win!"

Mr. Piper leaves his wife, Kitty (née Dittrich), a pint-sized former waitress whom he called the only person he ever feared. He also leaves three daughters and a son, and extended family, including his mother, Eileen Toombs.

"He was Roddy Piper inside the ring," she said a few days after his death, "but outside the ring he was Rod Toombs, a lovely boy." 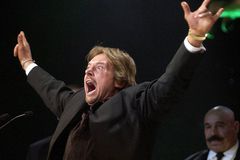