Toronto's future is up in the air – specifically, the 21 acres of air over the railway corridor east of Bathurst Street. The proposal to build over that vast sunken zone to create "Rail Deck Park" was the boldest move in Toronto urbanism this year – necessary, visionary and reflecting a sense of where and how the city is experiencing dramatic growth.

Presented by the city's planning division, it was loudly supported by councillor Joe Cressy and, surprisingly, Mayor John Tory.

It faces many obstacles. There's money available, but not yet enough. Suburban councillors immediately started carping about how downtown gets all the marbles. And the city has other priorities that will compete for resources and attention, such as desperately needed transit and the civic shame of Toronto Community Housing's maintenance backlog.

That was the state of the city in 2016: big change, some big ideas, lots of infighting and plenty of ground to make up. Yet there's reason to be somewhat optimistic: A few initiatives this year, including Rail Deck Park, the Don River Valley Park and the proposal to toll the Gardiner Expressway and Don Valley Parkway, suggest the city's political leaders are beginning to understand the big picture.

What is that picture? Growth and more growth, much of it downtown. According to city projections, Toronto will have added 700,000 new residents between 2011 and 2041, 225,000 of them coming to the downtown core and doubling its population.

These are almost unbelievable numbers. They will mean change at a scale we haven't seen since the transformative boom of the 1950s through the 1970s. Those people are going to need homes, workplaces, schools, community centres and parks.

This is where Rail Deck Park comes in: It would provide much-needed large open space for the incredibly dense neighbourhood that King-Spadina is becoming. The city estimates that a one-square-kilometre area there could house more than 40,000 people, almost all in high rises, with a serious deficiency in public space. Its estimated $1-billion cost raised the argument by councillor Frank Di Giorgio that it is a "super-luxury project" and resistance from councillor Giorgio Mammoliti. For perspective, Mr. Mammoliti's entire ward has 50,000 people and one of its parks, Summerlea Park, that is 56 acres by itself.

The harder I look at the proposal, the more plausible it seems. The city already has development charges and fees in hand that would make a substantial down payment on the cost, and this is exactly the kind of specific and flashy project that tends to sustain political momentum.

So is the proposal for the Don River Valley Park, a visionary scheme to turn 480 acres of that valley – all city-owned – from a dumping ground into usable public space. It would serve Regent Park and the fast-growing areas on the Port Lands at the mouth of the river. The non-profit Evergreen has pushed the city into seriously considering it, and the idea is moving forward with some support from private donors.

But private money isn't enough to build parks; the fact is the city needs to spend money, and a lot of it, to build and maintain the infrastructure it's going to need. So the fact that ever-cautious Mayor Tory is willing to defend Rail Deck Park is a positive sign – as was his late-year move to push for tolls on the DVP and the Gardiner.

Charging drivers to use highways is unpopular, but makes perfect sense: It's a tax on long commutes by car, a behaviour that imposes all sorts of costs on the public. (Some on the right are worried that low-income drivers will be unduly penalized. Somehow TTC fare hikes and Metropass increases, year after year, don't seem to prompt the same worries.)

If the tolls are imposed, much of their revenues will flow to fixing the Gardiner Expressway itself, including the boneheaded decision to rebuild the eastern Gardiner instead of replacing it with a road – for a minimal benefit to a few thousand drivers each rush hour. The mayor and council doubled down on that decision in December, and that alone will add about a billion dollars to the city's capital backlog. If Mr. Tory has glimpsed the future, the past is far from dead.

Yet a Toronto that does less to coddle and subsidize drivers, whose roads are built to move people instead of cars, may be in the offing: That's the promise of a new effort to redesign King Street and give priority to transit, pedestrians and cyclists.

There of all places, along King West, that's desperately needed: The streetcars are already overloaded, the sidewalks getting awfully full.

All this is hard to take in, and particularly so for people – including nearly all of Toronto's influentials – who live in houses in Rosedale or Forest Hill or North Toronto or the Annex.

I spent time in 2016 working on a guidebook to the city's architecture, which will be published in the spring; I found that these house neighbourhoods haven't changed much, physically, in 30 years. They are richer, they have fewer people, but they look much the same. If you see the world from there, and you haven't tried to find a new home recently, perhaps you can believe that this city should stay just how it is.

But that's a dream, and the giant park in the air is the reality. Or it should be; the question is whether Toronto can learn to spend, build, and imagine a viable future for itself. 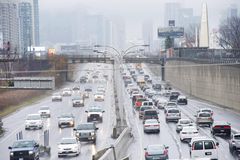 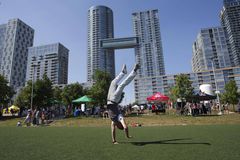