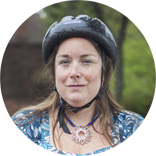 Worst or most frustrating parts of route: “Anywhere along Yonge down into the core has a very different attitude and atmosphere. Everyone is angrier and it’s more crowded. Once you are out of the downtown core it’s a completely different atmosphere. East of Spadina and west of Church it’s completely relaxed, like you are in a different city.”

The view of cyclists: Ms. Harris and her husband take their daughter to school in the car and end up driving a few kilometres every day. “Being both a cyclist and a regular passenger, you appreciate the road from both points of view,” she says. “In the car you are much more conscious of room you need to give a cyclist when you are passing. We pay homage to cyclists, and we try to give them as much room as possible, but it’s a little aggravating to see folks doing blatantly dangerous things that not only put them at risk but also kind of bring cycling in general into disrepute. And I’ve also realized how invisible a cyclist is at night unless they are well lit.”

Winter riding: “This past winter was the first time I’ve road through the winter. I always thought it wasn’t for me. I started riding home from Ryerson at night; it started getting really cold. There was a cold wind that was pushing against me. But I realized I could do it. I would creep into the garage exhausted and think ‘I did it, I can’t believe I did it.’ There would be a really fierce wind and I would say ‘I’m just gonna pedal more.’ It’s that sense that you can do much more than you think you can. It’s really affirming.”

– As told to May Warren 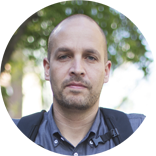 Why he rides: “For me, it’s the history and the sense of place. I live towards the top of what they call the Garrison Creek, so I live on the creek and I follow the creek down to Davenport, and Davenport as my bike route is like an ancient first nations travel route. There’s a plaque there that says back in the day they used it to go east to west across Toronto so they could see out over the city. So to me it’s kind of neat that I’m placing myself in my city and in my sense of place through the commute.”

Most frustrating parts of commute: “Drivers that cut me off. This morning I had to scream and yell at some old dude. Generally people look surprised. Occasionally they apologize, and then occasionally there’s road rage. I’ve been chased by cars before. I have to say, my style of biking is to sort of take my space. I don’t do dangerous things. I don’t do illegal things. But I will edge out into closer to traffic lanes so people see me and I’m not hiding in the corner. And because of that, people can get rude.

On bike lanes: “As you get further northwest of where I am, it’s lower-income, and those people would probably benefit much more from having bike lanes than folks who can afford the commute. If there was a major route that went northwest, if there was one major route that went a couple other directions, then people could feed into it and make their way downtown if they needed to.”

On bad habits: “What really drives me nuts? The people with the motorized bicycles in my lane drive me nuts.”

– As told to Amber Daugherty 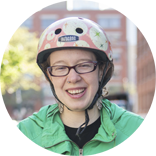 On cycle culture: “I think that one thing that's been really interesting with the summer is the amount of people on bikes. I used to bike in T.O. when I was a teenager, and that was about 15 years ago. And I just notice there's so many more people on bikes on the street – even in the winter, there were a fair number of people.

“While we have this huge burst in cycling, we have very little infrastructure to go with that and so there are a lot of cyclists on the road and not a lot of safe ways to get around. I'm pretty fearless, but a lot of my friends won't even cycle in the city because they’re too nervous about it. But I think it’s dumb luck. I'm pretty careful and I'm very aware of what's going on around me. But it's very rare. I've only met maybe one other cyclist who's never had an accident. Almost every other person I know has had one from very minor to very serious. It's almost like a time bomb. It's a question of not if, but when.

Construction: “Sometimes [construction is] well marked, often what's really difficult to deal with is they put up big construction pylons right to the edge of the lane and so there's no space for the cyclists. Also you have to go into the main lane and drivers will freak out about that. They will go around you, they will speed around you, they'll honk. You have a right to be there, but they're not happy about it.”

Where the city needs bike lanes: “To me, Richmond and Adelaide is a big gap because there's really no other east-west route.”

On cyclists’ behaviour: “Most cyclists are very very polite. They’re pretty respectful, they'll line up one behind another. There's a few cyclists on the road who are kind of road warriors – they speed past people and are dangerous. Or people who are really slow, and who pass you and then go at a turtle's pace and you can't get around them. But for the most part cyclists are pretty respectful.

-As told to Amber Daugherty 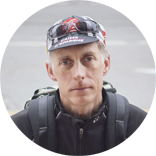 Why he cycles: “I’ve been doing it for years, no matter where I lived or where I worked, I always biked. I used to live in East York. When we moved way out here, I thought, ‘Wow, this is really far; I don’t know if I can do this.’ But I tried it and I thought, ‘Okay. This isn’t so bad.’ I gradually figured out a whole bunch of sidestreets and short cuts that keep me off the Danforth entirely. I’m almost all sidestreets from my house to downtown.”

On year-round biking: “In the winter, minus 10 is my cutoff. I can’t seem to keep my feet warm. And [I don’t ride] if it’s really nasty, if it’s raining really hard. When I lived closer to work, I would ride through anything, but it’s kind of a long ride now, so I’m not as keen to ride through downpours.”

Stolen bikes: “I had a nice mountain bike that got ripped off from work, so I decided I was never parking outside again. It’s kind of a pain to hump my bike down two levels into the underground, but it’s worth having my bike locked up and safe.

On cyclists’ bad habits: “Blowing red lights, that drives me crazy. That, and poor etiquette to other cyclists and drivers. If you’re stopped at a light and somebody cruises up beside you at a red and then tries to get in front of you even though they’re on some kind of 900-pound cruiser bike... obviously you’re going to have to pass them, which is dangerous. I see people do that all the time. And people who wear headphones. It’s so dangerous! You need your hearing, especially in traffic. It’s saved me more times than I can count.”

On how the city accommodates cyclists: “I think you have to make your own path in this city. There’s some bike lanes in the city that I use, and I’m grateful for them, but by and large I tend not to depend on the infrastructure of the city, I just make my own path and try to pick the safest routes and try to drive as defensively as I can.”

– As told to Justin Fauteaux

These interviews have been condensed and edited

Whether after the winter or following a longer hiatus from the bike, riding again can bring what Cycle Toronto executive director Jared Kolb calls "an incredible sense of independence." But before you start zipping around town, there are a few steps to make sure you and your bike are ready, and some common riding mistakes to remember to avoid