It wasn't the reaction you'd expect from a tradesman from Mississauga, at least not one who fits the drivers-versus-cyclists storyline that's often used as a wedge issue in Toronto politics.

Standing outside the Toronto Coach Terminal bus station, Mr. Bennet had stopped at a row of 10 docked Bixi bikes, the tires still pristine. He took bites of a sandwich between his refrain: "It's a good idea."

The heating repairman was at a job in the Entertainment District when he got a service call near the bus terminal.

"I've been in two parking lots today. There's $50 gone," he said. "I only needed a few tools over here - I could have put them in the basket."

Tradesmen doing service calls on bikes. If Bixi takes off - as it already has in Montreal and overseas in London - it could change the way people get around downtown.

Time to ride. I hadn't signed up online as a member so I didn't have a key fob. Neither, it turns out, did many of the people who did sign up online. Bixi's social media site has morphed into a complaint forum for these people. Bixi has implicated Canada Post. Problem solved.

As a casual user, I swiped my credit card. The instructions were simple, but I had to start from the beginning four times because I typed my phone number too quickly for the keypad.

I was eventually supplied with an access code, and after entering it at a dock I pulled my ride out and realized that the bikes, like the keypad, are not built for speed. At 22 kilograms they give the metric system a bad name for riders accustomed to 22-pound bikes.

Instead they're built for comfort, and for those who think downtown cycling should be about achieving a destination, not martyrdom. The beefy frame has no crossbar so it's easy to swing a leg over even if you're wearing a skirt (I assume). Riders used to leaning over in an aggressive pose will feel more like they are sitting at a kitchen table, but the head-high posture allows for maximum visibility. Once the thick rubber wheels get rolling, they power front and rear LED lights. A suite of chain guards, mud flaps and wheel skirts are designed to keep pants dry on the way to business meetings, though the wheel skirt is probably more intended as space for sponsor logos.

Despite the City of Toronto sticker on the frame, there is no ongoing subsidy. The city guaranteed Bixi's $4.8-million loan and helped find space for the 80 stations, but Bixi director Gian-Carlo Crivello expects the system to grow from 1,400 current members to 7,000 this year. Mr. Crivello says that at that level the system will sustain itself, at which point 50 per cent of profits will go to the city. If the program gains traction and expands (Montreal grew to 10,000 members in 2009, its first year), it could help pay for road repairs or, say, prohibitively expensive paint for bike lanes.

Notions of sustainability and momentum cycled around my head as the wheels hummed down Elizabeth Street toward city Hall. Biking up the ramp at Nathan Phillips Square for a circuit of the City Hall roof garden seemed like a seasonal way to commune with the departed administration that brought Bixi to Toronto, but the ramp and staircases were still barred.

When I asked Mayor Rob Ford's spokesperson, Adrienne Batra, if the mayor was in favour of Bixi, she replied that he was aware of it and would "see how it goes." In fact, it was one of the mayor's right-hand men who waved the city banner at Bixi's launch Tuesday morning. Councillor Denzil Minnan-Wong, chair of the public works and infrastructure committee, said he hoped Bixi would attract new cyclists to the core without being cast as an interloper stealing space from cars.

"It's not about competition. Modes of transportation have to be complementary," Mr. Minnan-Wong said of the program he had voted against extending a loan guarantee for. As he gamely rode away for the benefit of the television cameras, I couldn't help but think he should have started in a lower gear so his first few cranks didn't look so wobbly.

After my aborted trip above City Hall I headed to the westernmost station to gauge the network's reach. At Bellevue Square in Kensington Market, Matthew Cooke was returning a bike he had picked up at Bloor and Spadina before heading to a restaurant. Mr. Clifford said he would like to see the station catchment expanded so it extends to Bathurst or Ossington to serve more destinations. Of course, the challenge for Bixi is to cover a wide area while maintaining density - so stations are no more than 300 metres apart. From Spadina to Jarvis, south of Bloor, is the area for phase one, but with the city reluctant to give up parking spaces - favouring instead stations on sidewalks - the stations are not always as close to subway stations as commuters would like.

Biking back across town I was near the bike station at Shuter and Bond streets when I realized my free half-hour was almost up. It's one of about 11 stations that displace parking spots, and when I got there motorist Leeda Crawford was not viewing parking in Toronto in a generous light: The pay kiosk had taken her credit card but had not given her a ticket for her dashboard. The meter reader (anachronism, I know) who had just left was no help and when she saw the line of bikes taking up two parking spots the questions started.

"Where did these come from? How can they take up parking spots? Do they have to pay for them?" she asked. I told her what I knew of Bixi, and she turned her attention to the cyclists, expressing concern for those who don't wear helmets. I mention Teresa Fulker, the dog walker I had just met who looked at the map of Bixi stations and decided the system was purpose-built to help her travel between downtown clients.

But Ms. Crawford was an easy convert. "Well, at least people are getting exercise," she said. "Besides, there are too many cars out here. It's rush hour all day long."

I waited the requisite two minutes and then took out a new bike to continue my trip. Saddling up I realized that if Jim Bennet isn't available as a spokesperson for Bixi then Ms. Crawford could fill in. In the supposed war on the car, it appears drivers have nothing to lose.

With Tuesday's launch, Bixi began stocking bike stations from Jarvis Street to Kensington Market and from Bloor Street to Lake Ontario. Within two weeks, it will have 1,000 bikes spread across 1,500 docking points at 80 stations.

Locate a bike station at toronto.bixi.com. Better yet, use the free Spotcycle smartphone app, which lays out a map of stations with pie charts showing bike availability.

At the station, riders with annual or monthly memberships just insert their key fobs in a slot in the dock to release the bike. Non-members pay for access by swiping a Visa, MasterCard or American Express credit card at the pay station (a $250 deposit is placed on the card for 10 days). There's a maximum of two bikes per card, and riders must be 18 years of age or older.

The pay station will display or print out an access code. Pick out one of the identical bikes (in other cities, riders turn the seat backward when the bike needs repair) and punch the access code into the dock.

When the dock light turns green, pull the bike out. There is no lock, so for stops between stations you'll need to bring your own.

Return the bike to an empty dock at any station in the city. If the station is full, it will indicate the nearest alternative with empty slots.

You only need to wait two minutes before starting a new ride (with a reset clock). Reinsert your fob or credit card. The system will recognize the card and display or print a new access code.

After paying the access fees, rides of less than half an hour are free. But the second half hour costs $1.50, the third is an additional $4, and every subsequent half hour costs another $8. 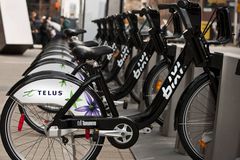 Rob Ford could become a champion of cycling
April 29, 2011 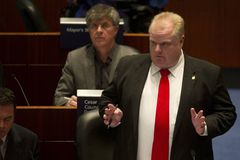 Please welcome the Bixi car, Mayor Ford’s new initiative
April 29, 2011
Follow us on Twitter @globetoronto Opens in a new window
Report an error Editorial code of conduct
Due to technical reasons, we have temporarily removed commenting from our articles. We hope to have this fixed soon. Thank you for your patience. If you are looking to give feedback on our new site, please send it along to feedback@globeandmail.com. If you want to write a letter to the editor, please forward to letters@globeandmail.com.
Comments