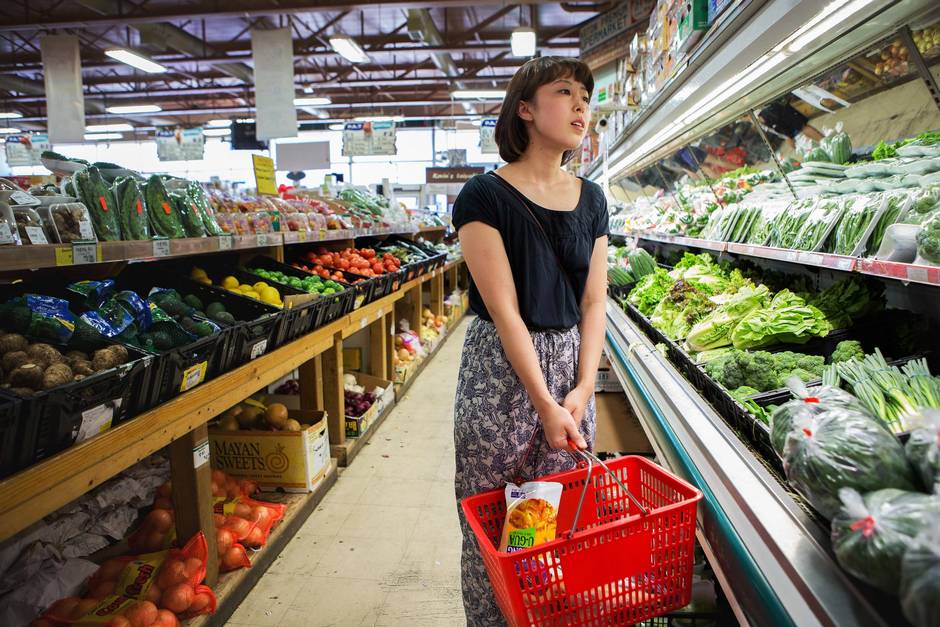 Honami Kim shops at P.A.T. Central, an incredible but oft-overlooked Korean grocer on Bloor Street West. (Jennifer Roberts for the Globe and Mail)

A friend and I were eating our way through Scarborough the other week when he pointed toward an enormous supermarket I’d never heard of. “Al Premium,” the sign read. The place was the size of your average airport hangar. The name made it sound like a duty-free. But walking its aisles was a mind-altering experience, because Al Premium flips the old-guard Canadian grocery formula entirely upside down. The token “ethnic aisle,” if they had one here, would be devoted to the Toll House cookies and frozen turkey dinners that fill out the bulk of your average downtown supermarkets. Al is devoted to all the other food traditions around Toronto: Croatian and Macedonian, Jamaican, Filipino, Fujianese, Tibetan, Thai, Syrian, Piedmontese and Bangladeshi, among scores of others – it’s a little like your local Loblaws superstore, but stocked by a corps of UN chefs.

Toronto and its suburbs are a region of incredible international grocers, among them Iqbal Halal and Sunny Foodmart in Don Mills, Super Arzon and Khorak Supermarket in North York, the Korean Galleria in Thornhill and York Mills, Adonis (which I wrote about a couple of weeks ago), Arz Fine Foods, T&T Supermarket, Paramount, Perola, a half-dozen other terrific spots in Kensington Market, as well as Sanko, Fiesta Farms, Lady York, Cheese Boutique and the South Indian Spiceland chain. 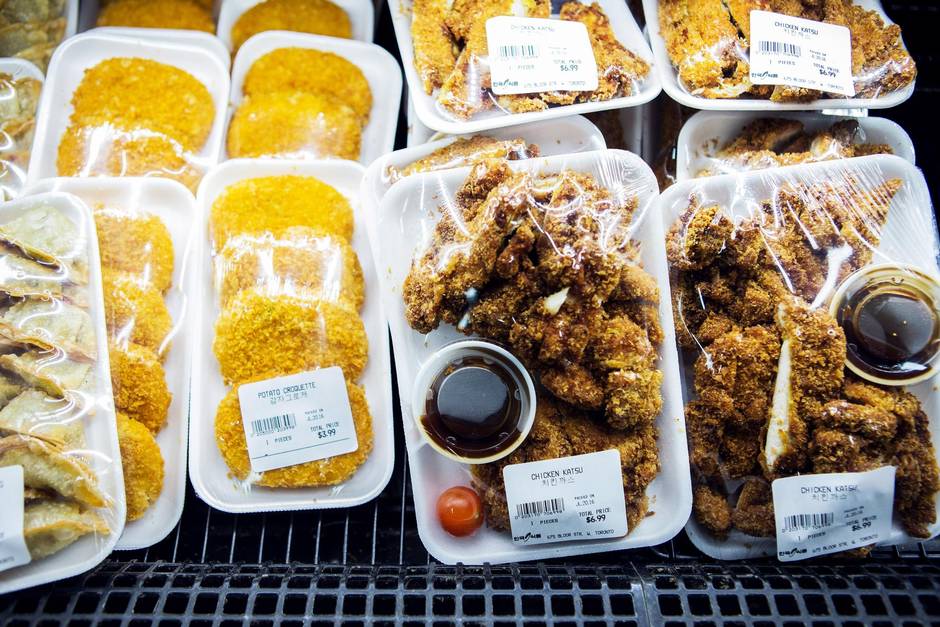 Various prepared foods are seen for sale at P.A.T. Central, a Korean grocer in Toronto. (Jennifer Roberts for The Globe and Mail)

This week, a cook’s (and grazer’s) tour of a few of them. A stroll through their aisles, basket in hand, is one of the best ways I know not just to feel a part of the city, but to forever liven up the way you eat and drink.

From early May through right about now, the first thing that hits as you approach this Southeast Asian-focused supermarket is the sweet, tropical orchard scent of ripening mangoes – a dozen different types at peak season are stacked chest-high in cases right outside the door. The produce here is some of the best and most varied I’ve seen, and if the crowds of shoppers are any indication, the turnover is set to hyperdrive. 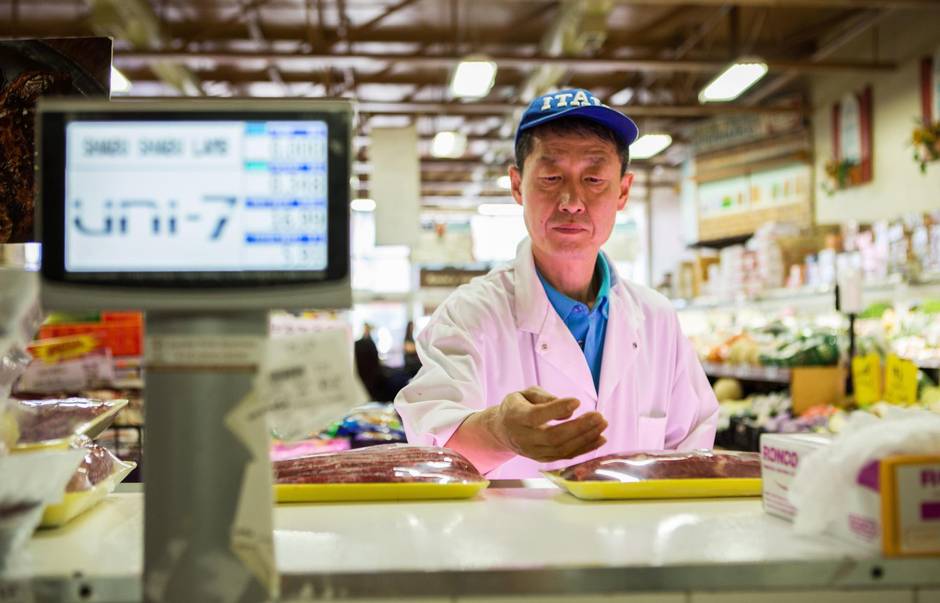 Meat is cut and weighed at P.A.T. Central, a Korean grocer in Toronto. (Jennifer Roberts for The Globe and Mail)

Apart from those mangoes, there was breadfruit, quince, dragonfruit, guava, durian, jackfruit and mangosteen (among a few-score other fruits) last time I popped in, as well as porcelain-skinned Thai eggplants the size of gobstoppers, and water spinach, fresh water chestnut and bundles of deep green fenugreek leaves.

If you’ve ever stumbled on a fruit or herb or vegetable in a recipe but couldn’t source it, they probably have it here. The middle aisles are just as varied, jammed with the likes of tinned quail eggs, packaged Indian snack mixes and a whole lot in between.

It’s cheap and plentiful, and be warned, the frills – apart from the selection, of course – are few. But if you’re stuck in a cooking and eating rut – and who doesn’t get that way, sometimes? – a half hour here is just the cure. 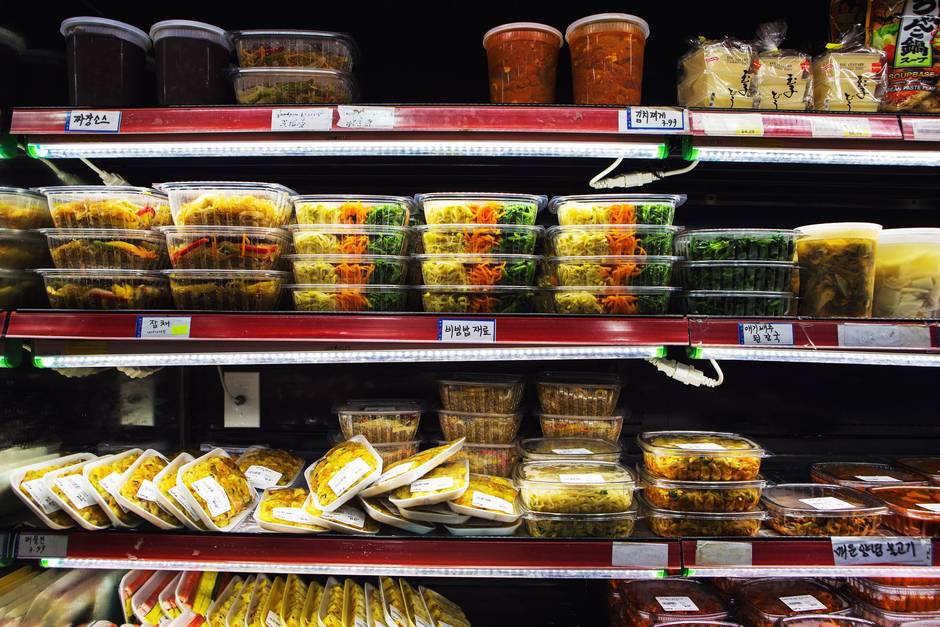 From fresh produce to prepared foods to an in-house butcher, P.A.T. Central will fulfill any craving for Asian cuisine. (Jennifer Roberts for The Globe and Mail)

It never ceases to amaze me how many downtown dwellers have never heard of, much less entered, this extraordinary Korean market at Bloor near Christie.

The middle aisles are stocked with a superb (and if you aren’t Korean, fascinating) variety of spice, soups, pastries, instant foods, candies, noodles and pan-Asian pantry items, but it’s the outside aisles and refrigerator cases that make this shop so great.

The Korean and Japanese pickle selection is one of the best in town: You’ll find whole pickled daikons stained bright yellow (it’s from food colouring, but anyway), tubs of pickled ume plums, pickled radish, lotus root, burdock and cucumbers; add a platter of these to a summer barbecue menu and your work is almost done. 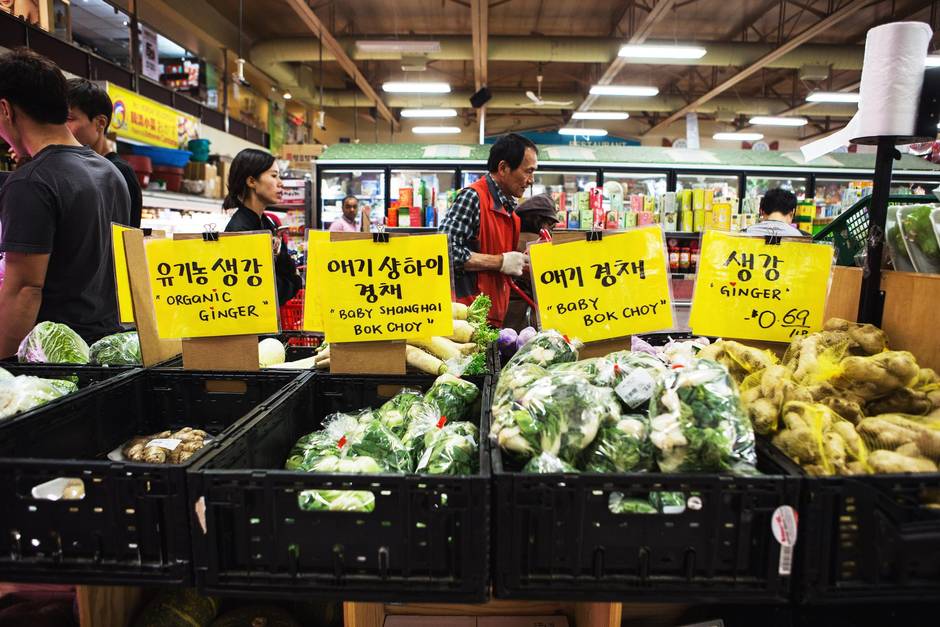 Fresh produce is seen for sale at P.A.T. Central, a Korean grocer in Toronto. (Jennifer Roberts for The Globe and Mail)

At the back, the coolers are full of freshly made Korean soups (pork bone, spicy beef), snacks (check out the addictive spiced soy beans) and starters (marinated spicy squid, seafood pancakes), as well as excellent cabbage kimchi, available with or without fish sauce.

The produce is terrific, and the meat selection about as good as at your typical hipster butcher shop: They had snowy blocks of short rib, fresh, glistening liver and beef tongue last time I went, as well as freezers stacked with the likes of sliced, skin-on pork belly and ready-to-grill bulgogi beef. On the way out, do not under any circumstances miss the little cash-only waffle counter. They’re made-to-order and cost $2 apiece; the crisp and beautifully yeasty custard-filled version is one of the best quick-service pastry snacks I know. 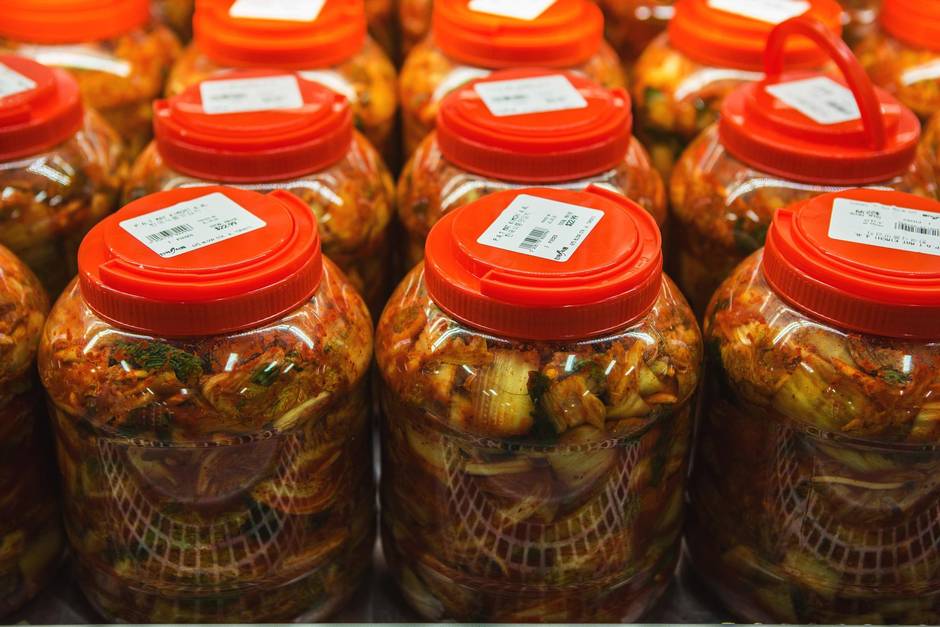 Various kimchi is seen for sale at P.A.T. Central, a Korean grocer in Toronto. (Jennifer Roberts for The Globe and Mail)

You could skip the entire grocery section at this warehouse-size international grocery emporium if you wanted, and travel the world of food through Al’s prepared-food counters alone. About as long as a downtown block, it begins with Indian samosas before skipping onto shawarma (made with crunchy cucumber pickles), butter chicken, biryani, chana masala, and then a full sushi and sashimi fridge and a section devoted to Filipino and regional Chinese specialties such as fried hasa hasa (that’s mackerel), lemon chicken, lotus buns (the bun and dumpling selection is breathtaking) and eggplant in yu heung sauce.

From there, it’s on to the bakery, with its red bean cakes and egg tarts, its chicken pies and winter melon pastries, set next to beautifully flaky French palmiers. 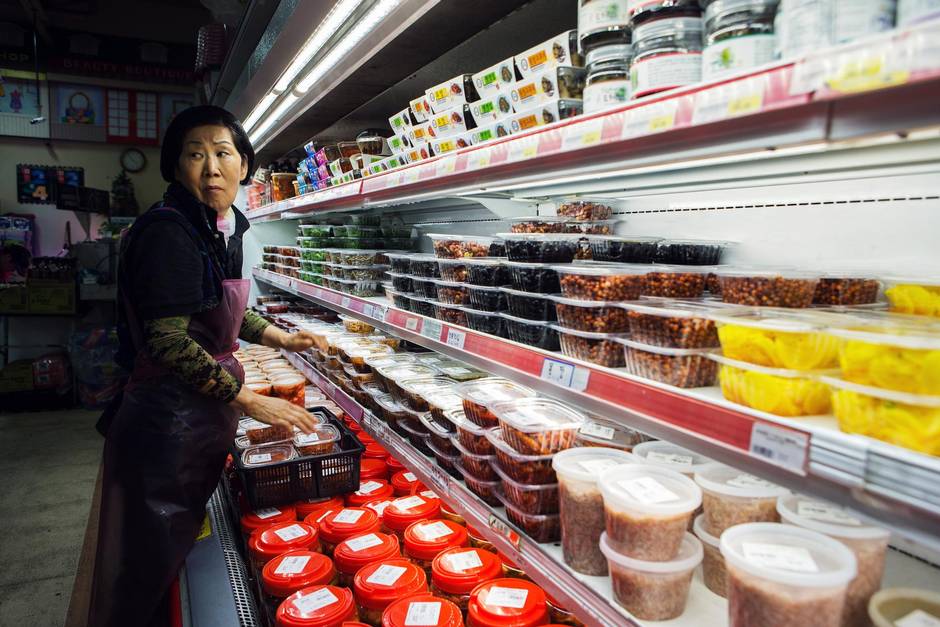 Kimchi is stocked at P.A.T. Central, a Korean grocer in Toronto. (Jennifer Roberts for The Globe and Mail)

The fish section here, in a separate room, at the back, is one of the best in town (check out the fresh, gleamy-eyed milkfish, which is to Filipino expats what sockeye salmon is to West Coast Canadians), and the freezers, which seem to go on and on, contain everything from whole durians and packaged jackfruit meat to hard-to-find meats to lemongrass.

The middle aisles, organized by nationality, demand exploring also; you’ll know your way around by all the flags. (A sampling from a few of the aisle markers: “Balkans and Polish Jar Food,” “Jamaican Snacks,” “Baci Perugina.”)

If you need a little more focus, look up a halo halo recipe – that’s the Philippines’ brilliant shaved ice and evaporated milk dessert – and head to Aisle 6D (“Filipino Foods, Filipino Seasoning, Filipino Pantry, Filipino Sauces…”), where the range of jarred jellies, fruit mixes, jams, and fruits and nuts in syrup, all of them ideal halo halo toppers, is approximately 10 times better than you’d need to assemble the single-greatest summertime frozen dessert bar ever made.

Editor's note: An earlier version of this story incorrectly called the store "A1 Premium". In fact, the name is Al Premium. This version has been corrected.