A look back at the major events during Rob Ford’s four years as mayor: 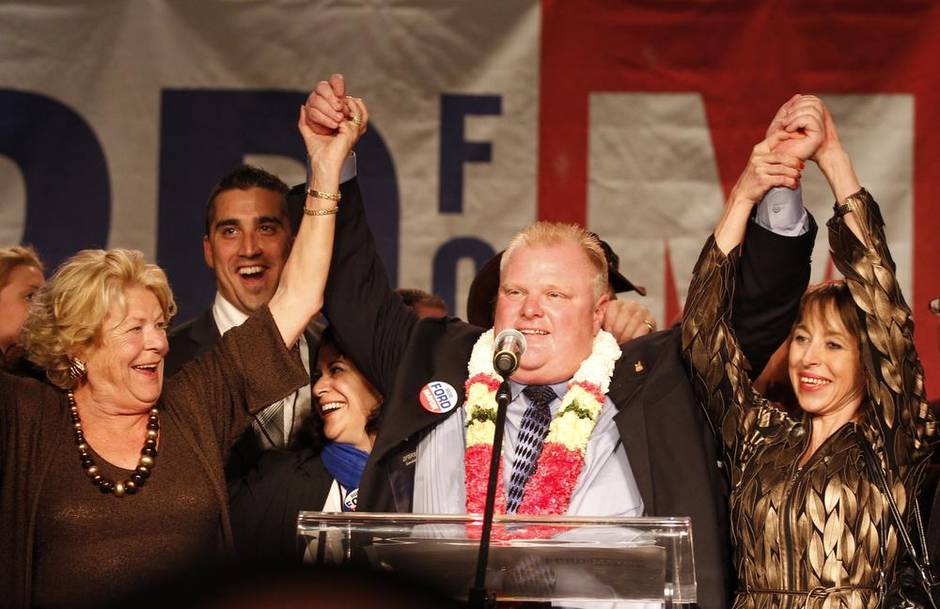 Mayor-elect Rob Ford being greeted by his supporters and making his speech at the Toronto Congress Centre on Oct. 25, 2010, after winning the election. His mother Diane is on the left and wife Renata is on the right. (Peter Power/The Globe and Mail)

Rob Ford won the October, 2010, Toronto mayoral race with 47 per cent of the vote, an 11-point margin over runner-up and early favourite George Smitherman. Though he entered the race as an underdog, Ford’s popularity gained steam over the seven-month campaign, as his slogan, “Stop the Gravy Train,” and his everyman persona resonated with disgruntled voters. The right-wing North Etobicoke councillor vowed to eliminate wasteful spending at City Hall, cut taxes, contract out public services and emphasize subways in favour of streetcars. His victory was seen a monumental shift for the city, widening the wedge between suburban residents, who identified with him, and a traditionally progressive downtown electorate. 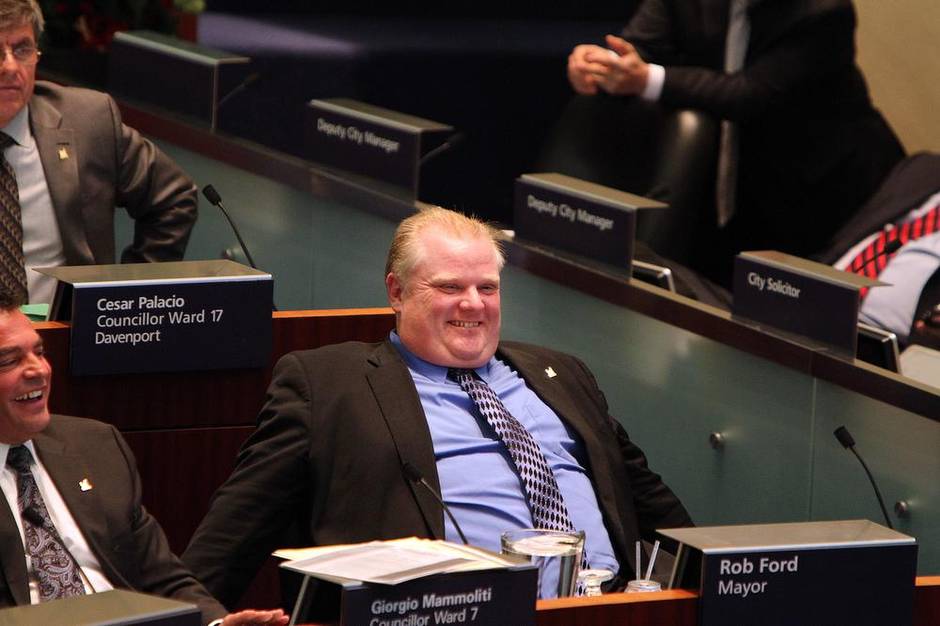 Ford’s triumphs tended to come in the earliest months of his tenure as mayor. Save for a brief strike by library workers, Ford had new contracts with outside workers; by spring 2011, the TTC was declared an essential service; and that summer privatized garbage collection west of Yonge Street began. Ford also killed the city’s vehicle registration tax and slashed the office budgets of all councillors. Wins were intermittent in 2012 and 2013 but in October last year he squeaked his Scarborough subway initiative through by a 24-20 vote. 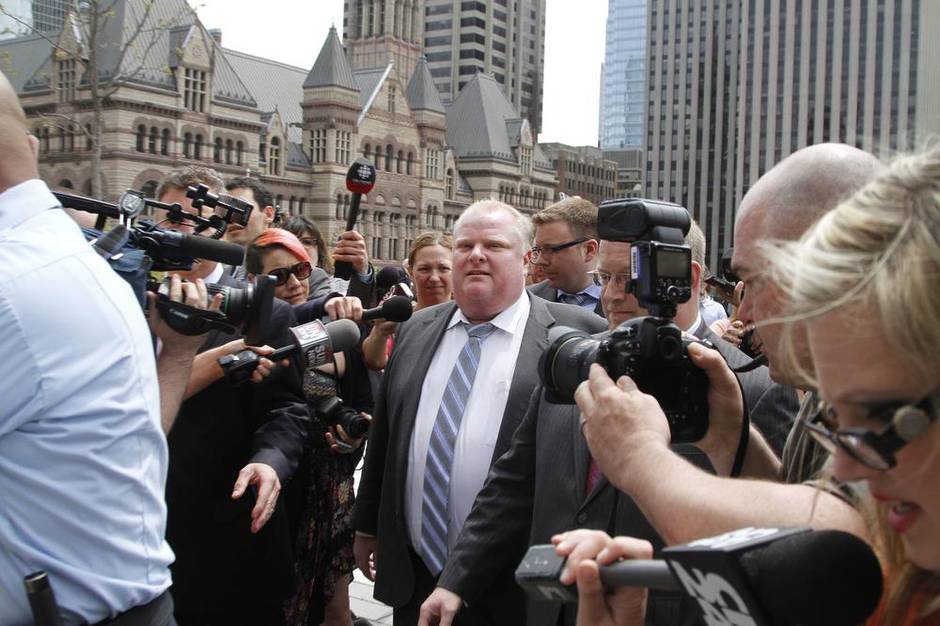 Rob Ford attends the flag-raising ceremony marking the start of Pride Week, the day after substance abuse allegations against him were reported by The Toronto Star, May 17, 2013. (Fernando Morales/The Globe and Mail)

Ford and the media became their own huge ecosystem during his mayoralty. Ford’s antics, his lone-dog stature and his “shoot-from-the-lip” verbosity had made him a media favourite during his 10-year run as city councillor. But as mayor, press scrutiny only intensified and Ford’s behaviour, rather than being matured by “the discipline of power,” became progressively more erratic. By early 2012, relations with the media, especially print media, were fractious, leading Ford and his brother, councillor Doug, to host their own radio show and eventually a YouTube channel. Come spring 2013, Ford was virtually a daily fixture in the news cycle of seemingly every Toronto media outlet, as well as a familiar face nationally and internationally. The attention held even after he was stripped of most of his powers last November. Pundits began using terms like “addictive,” “abusive,” “unhealthy” and “dysfunctional” to describe the media/Ford relationship. 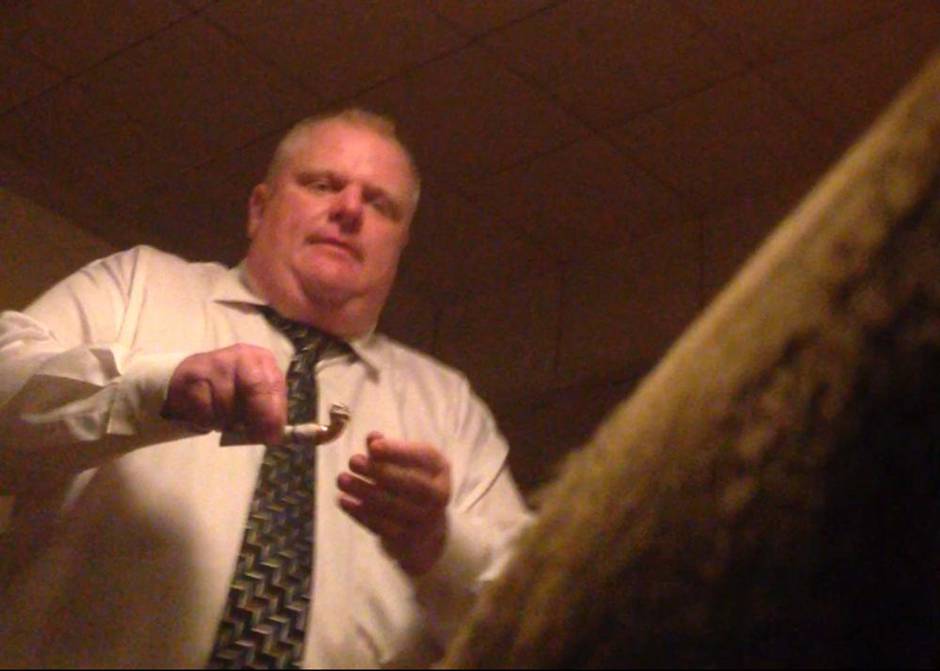 Still images from a video obtained by The Globe and Mail showing Mayor Rob Ford. The footage is part of a package of three videos that a drug dealer says he surreptitiously shot on April 26, 2014. (The Globe and Mail)

After months of repeatedly denying media reports about a video showing him smoking crack cocaine, Ford made the announcement in November, 2013, that he had indeed smoked the drug in a “drunken stupor.” In spite of calls for his resignation, Ford vowed to stay in office. His admission attracted media attention around the globe, while the phrase “drunken stupor” quickly became an Internet meme. After further videos surfaced showing the mayor acting erratically, including one in which he is heard speaking in Jamaican patois and another that showed him smoking what appeared to be a crack pipe in his sister’s basement, Ford entered an Ontario rehab facility in May, 2014. 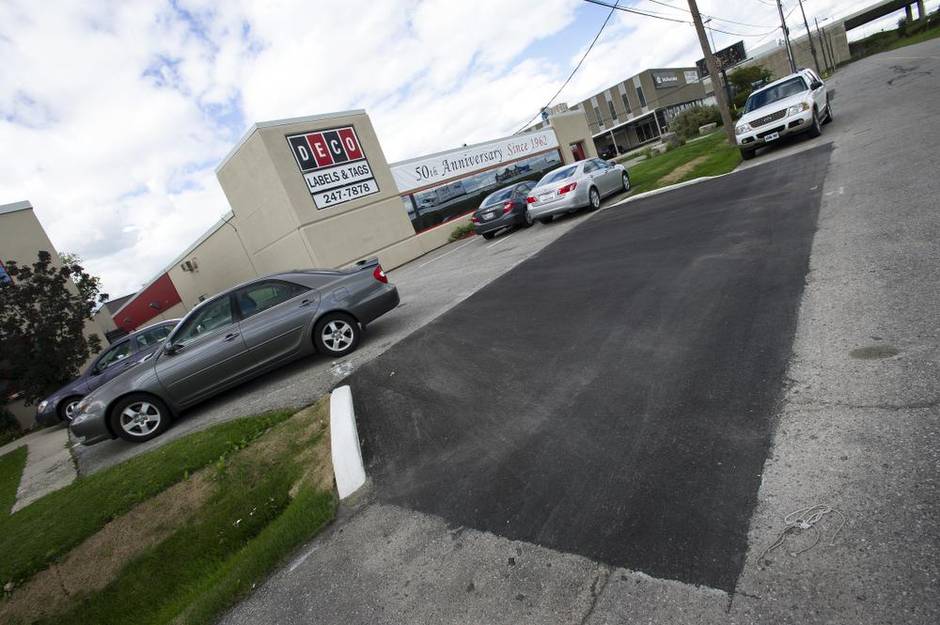 As mayor, Ford, along with brother Doug, continued to have a proprietary interest in Deco Labels and Tags, the successful Etobicoke printing and manufacturing business co-founded by their late father, Doug Sr., in the 1960s. With Ford declining to put his assets in a blind trust, media scrutiny inevitably turned to the Ford family’s business relations, both with the city and with non-Ford businesses seeking contracts or services from the city. Particular attention in the last 20 months has been paid to the Fords’ myriad dealings with Apollo Health and Beauty Care, a cosmetics company and Deco client. A recent Globe and Mail investigation discovered that the Fords, in 2011, were looking into the possibility of the city expropriating land for an Apollo parking lot. 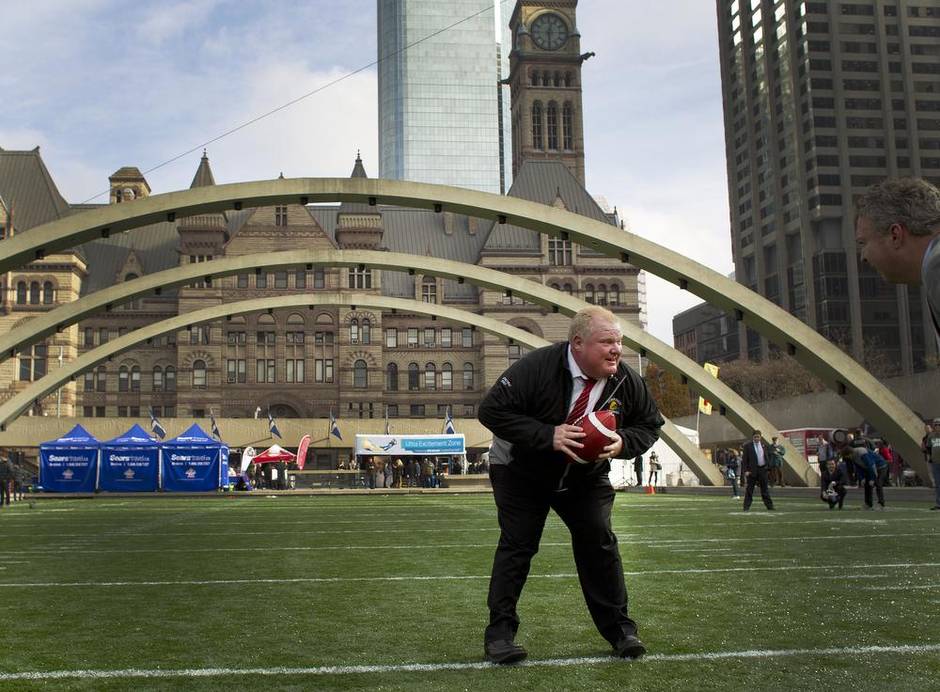 Rob Ford prepares to make a play during a short game of touch football at Nathan Philips Square, Nov. 20, 2012, as part of the 100th Grey Cup celebrations. (Peter Power/The Globe and Mail)

Ford’s efforts to promote youth football landed the mayor in hot water on more than one occasion. In 2012, a judge ordered him out of office, deciding that he acted in conflict of interest when he participated in a council vote over whether to make him pay back improperly solicited donations for his football foundation. Ford appealed the decision and won. Meanwhile, he also came under fire for missing council meetings and taking time away from his mayoral duties to coach the Don Bosco Eagles high-school football team. In May, 2013, he was dumped by the team amid allegations of the existence of a video showing him smoking crack cocaine. And as The Globe reported last month, documents released under freedom-of-information legislation allege Ford had threatened a teacher, swore at players, and arrived late to a practice while appearing inebriated. 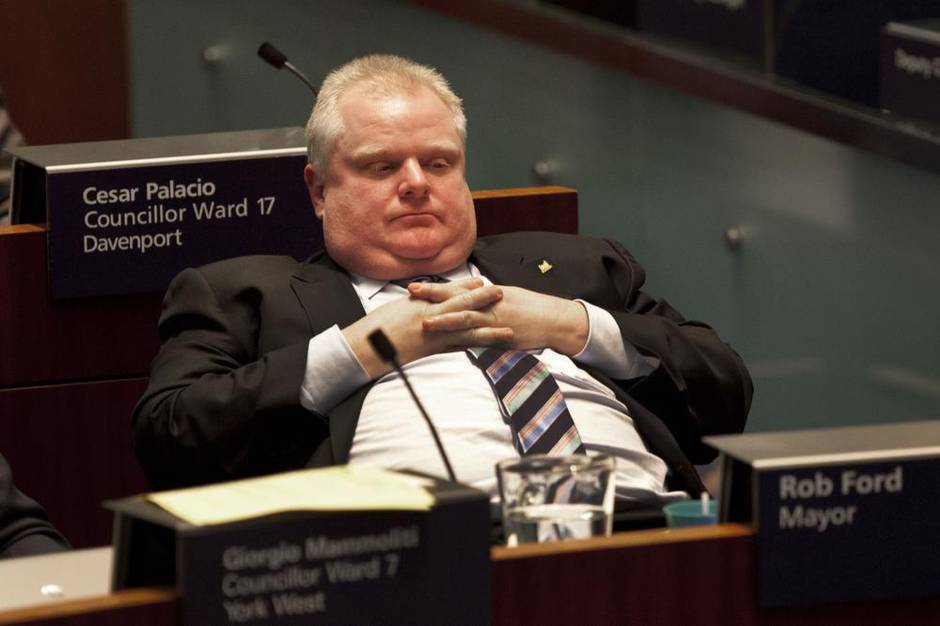 Rob Ford pauses after the results of a vote re-electing councillor Karen Stintz as TTC chair, March 5, 2012. Councillors voted 29 to 15 earlier in favour of a proposal by Stintz, who risked her job to ensure a new commission supports council's plan to build above-ground light-rail transit. (Moe Doiron/The Globe and Mail)

Rob Ford’s leadership was dealt a blow a year into his term, as support among even his allies was seen to falter on his plans to slash the city’s budget and his vision for the development of the Port Lands. Faced with a lack of support, Ford dropped his bid to seize control of the Port Lands project, one that included ambitious plans for a Ferris wheel and a mega-mall. He also retreated on unpopular money-saving measures, including a proposal to close public libraries. City council delivered the mayor another major defeat in May, 2013, when it voted overwhelmingly against the proposal for a downtown casino. Ford and his brother, Councillor Doug Ford, were among only four votes in favour, compared with 40 anti-casino votes. 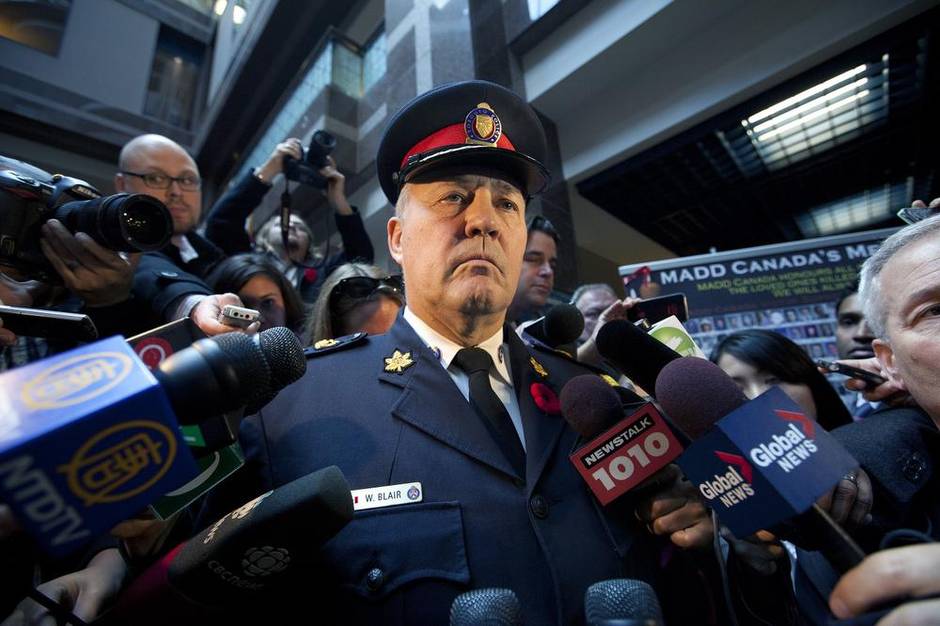 Toronto Police Chief Bill Blair answers media questions about comments made by Doug Ford and Rob Ford at Police Headquarters on Nov. 5, 2013, after Blair took part in a kickoff for this year's MADD campaign. (Deborah Baic/The Globe and Mail)

Relations between Toronto Police Chief Bill Blair and Rob Ford were cordial, more or less, early in the mayoralty, even as the chief eventually experienced a flat-lining of his operating budgets. Tensions grew last year, however, with the revelation that the mayor and some associates were under police surveillance in an operation, Project Brazen 2, spun off from the massive Operation Traveller guns-and-gangs investigation. Conflict ensued last October when Blair announced police had a video of Ford allegedly smoking crack cocaine, a video the mayor previously said did not exist. Blair called the video contents “disappointing;” Doug Ford said the chief had “gone rogue;” Rob Ford said taxpayers’ money was being wasted and dared Blair to arrest him. Blair, instead, sued Doug Ford for defamation (an action subsequently dropped) after the councillor intimated the chief had told the media that the mayor had been subpoenaed for the trial of associate Alessandro Lisi. 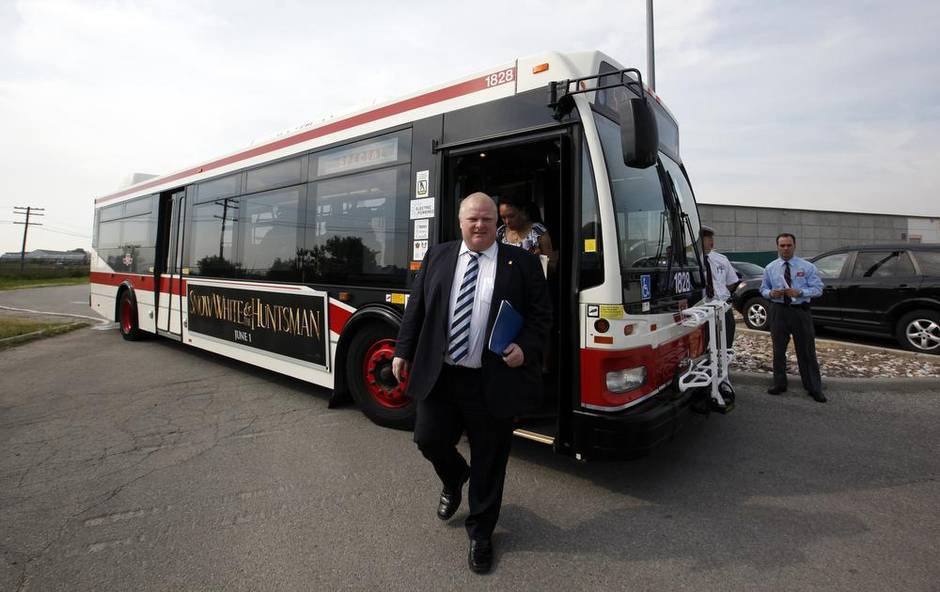 Rob Ford exits a TTC bus outside the site where the tunnel boring machines"Holey" and Moley" were installed, during a press conference on June 11, 2012, where it was announced that the first twin tunnels section of the Toronto-York-Spadina subway extension was completed. (Deborah Baic/The Globe and Mail)

From the start, Ford made it clear he is no fan of streetcars. His refusal to support light-rail transit in favour of increasing subway service – most notably an extension of the Sheppard subway line – has been a continual flashpoint during his tenure. Debate over how to plan for the city’s transit future became so heated in 2012 that then-TTC chair Karen Stintz famously stormed out of a commission meeting. In October, 2013, Ford scored a victory when council voted 24-20 in favour of extending the Scarborough subway line. Until he dropped out of his re-election bid on Friday, Ford continued to press for subways, promising to build 32 kilometres of new underground track. 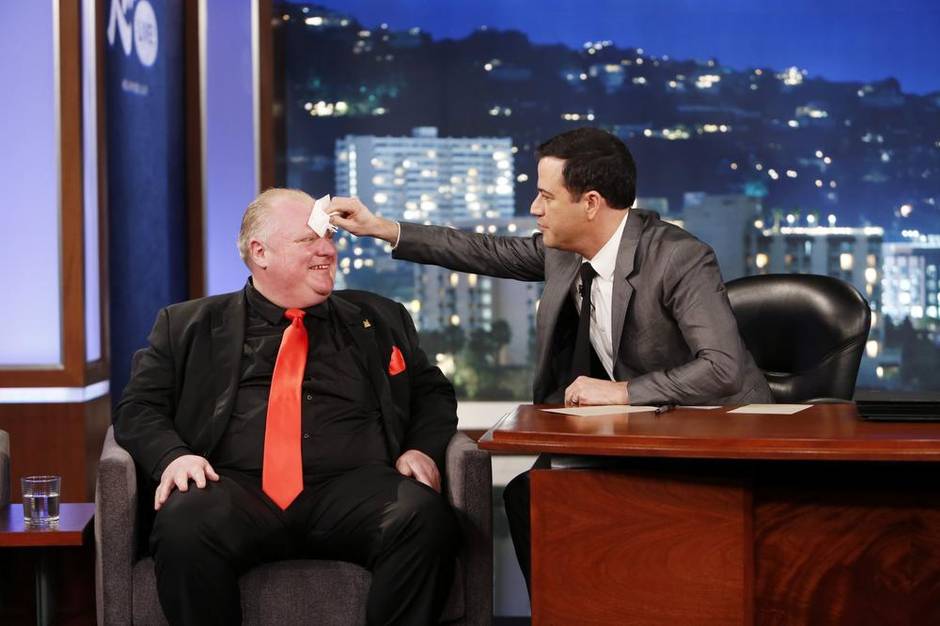 The mayor and the comedian

Ford achieved an apotheosis of sorts in the popular imagination with his March 3, 2014, appearance on ABC’s Jimmy Kimmel Live! Ford had long been mocked by U.S. comics but here he was, in Los Angeles, in black suit and bright red tie, in a one-on-one face-off with one of his most assiduous late-night maligners. There was general agreement that it did not make for great television, even as three-million sets were tuned in, and Ford later complained that Kimmel’s probing of his drug and alcohol issues had been a “set-up.” Still, the Fords deemed Kimmel “a nice guy” and upon the mayor’s return to work on June 30 the comic wished him well, saying on-air that his weight loss made him look like “a new man.”