Do cops and schools really mix? It's a fair question after the incident at Northern Secondary School in which a policeman was videotaped trying to handcuff a mouthy kid in the hallway.

To get some answers I went to North Albion Collegiate Institute at Kipling and Finch. "Nacki," as students call it, is in a "challenged" neighbourhood of the city's inner suburbs. Ninety-six per cent of students have at least one parent who was born outside of Canada. Sixty-five to 70 per cent are South Asian and about 20 per cent are black. In a school of more than 1,200 students, no more than 12 are white.

Lots of kids are growing up in poor, single-parent families. Lots have been in trouble with the law. To prevent fights, theft and vandalism, the school has 40 security cameras and three hall monitors. Since last October, it has also had a cop.

The son of Indian parents, Randeep Ron Chhinzer grew up in a tough corner of Brampton himself. But when he came to NACI as a school resource officer - one of 50 now in Toronto schools to maintain security and reach out to troubled kids - many saw him as the enemy. They turned away when he came down the hall, muttering among themselves or sucking their teeth in disdain. "No one would talk to me," recalls Constable Chhinzer, an athletic 27-year-old with a shaved head and an open manner.

One day he saw some boys playing football in the gym. He put up a notice calling a football practice and, to his astonishment, 70 kids came out.

As he put them through their paces in after-school drills that lasted three hours and more, they gradually learned to trust him and see the man behind the blue uniform and flak jacket.

Some of the boys who were most hostile at first were drawn to him most. One of the school's toughest kids became a star of the team. He had a rap sheet for robbery, assault and car theft. With a 6-foot-2, 240-pound frame and don't-mess-with-me-manner, the 18-year-old had made it clear he despised "Officer Ron," as Constable Chhinzer was soon being called.

But when the constable made him a team captain, "he looked at me and his eyes lit up. For him it was the first time in his life that somebody, specifically a male, told him they really believed in him."

He started confiding in Constable Chhinzer about his life: his mother left the home when he was 8 and his father when he was 12, leaving him to be shuffled among foster homes. By the time he hit high school he was living alone in a one-bedroom apartment, working odd jobs to survive. With the advice of Constable Chhinzer and others, he is now finishing his schooling as an adult student and hoping to become a chef.

This is the promise of police in the schools. Troubled kids learn that cops aren't always out only to hassle or arrest them. Cops learn that there is sometimes more than simple malignancy behind the tough kids in hoodies and ball caps they see on the street.

As a police officer, "You're always around negative things," Constable Chhinzer says.

"Doing this job really brought me back to seeing the good in everybody."

That is one reason Chief Bill Blair offered to put cops in the schools - not just to break up fights or keep intruders off school grounds (which they do) but to bridge the yawning divide between police and "at-risk" youth.

It seems to be working. The program is so popular that it was expanded to 50 schools from 30 in September. Many of the SROs are becoming deeply involved in their schools as coaches, career advisers and mentors. Of course, their presence will always annoy some students, like the dolt who refuses to show his ID, claims he has done nothing wrong and repeatedly resists a simple order from a patient cop.

Kids now come to Constable Chhinzer when they hear something bad is about to go down in the school. People in the neighbourhood ask for Officer Ron, who they have heard about from their kids.

This summer the constable was assigned to police Caribana, the waterfront extravaganza. He and his partner saw a big group of tough-looking kids coming right at them.

"Should I call for back up?" asked the partner. "No, no, no, those are my kids," said Constable Chhinzer, as they greeted him with shouts and the slap of palm on palm. They were from NACI. 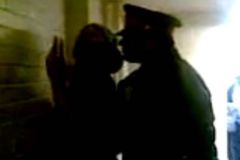