“Pride is political,” shouted a protester atop the Black Lives Matter float at Sunday’s Pride parade in Toronto, and this year it would have been hard to disagree.

The annual celebration of the LGBTQ community took over a portion of downtown Toronto on Sunday in a rainbow-clad display of defiance just weeks after a homophobic shooting rampage claimed dozens of lives in a gay Orlando nightclub. 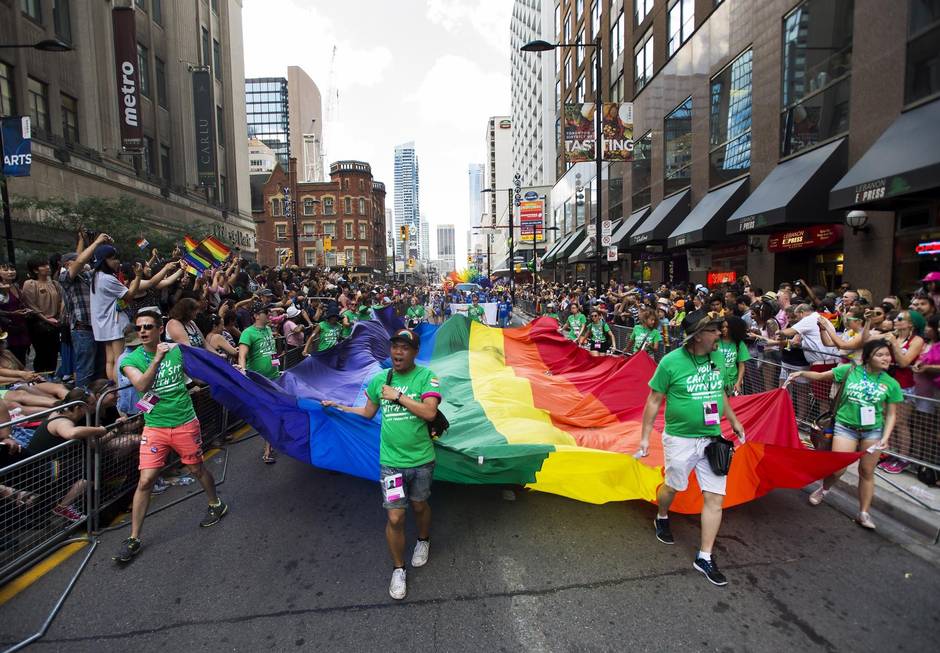 Justin Trudeau’s raucously received appearance marked the first time a Canadian prime minister has marched in the parade, a milestone that prompted some to reflect on the progress North American society has made on gay rights in recent years.

Mr. Trudeau said the Florida tragedy is a reminder that “we can’t let hate go by … We have to speak up any time there is intolerance or discrimination.” 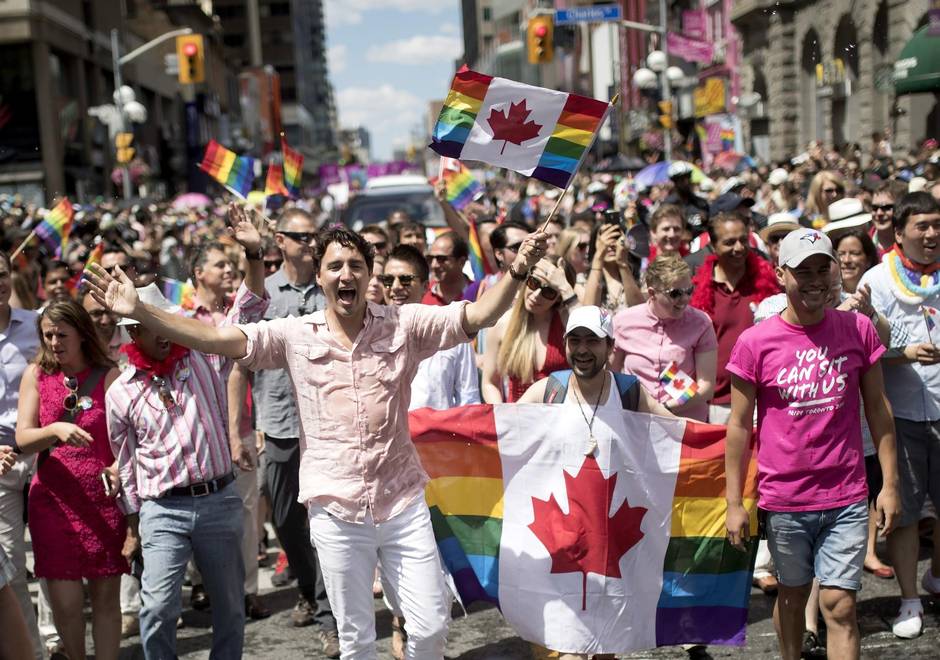 Prime Minister Justin Trudeau waves a rainbow-coloured Canadian flag as he marches in the annual Pride parade in Toronto on Sunday. (Mark Blinch / The Canadian Press)

This year, the parade’s fun-filled atmosphere vied with moments of poignancy, sorrow and anger, as the historic tension at Pride between politics and partying tilted in favour of the politically minded.

Standing along the parade route, Lance Rawlings said that he felt the Prime Minister’s attendance was a blow against homophobia. 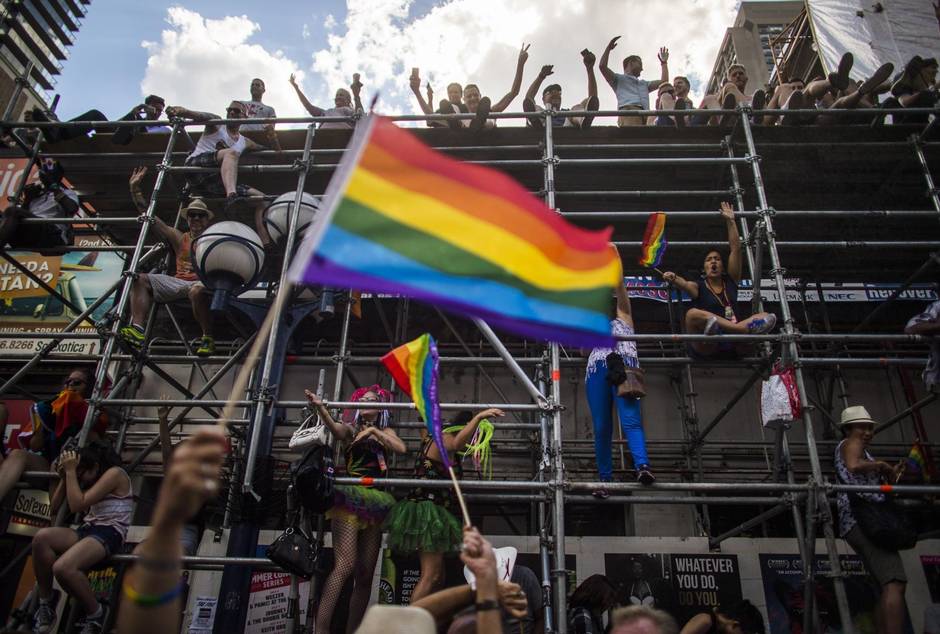 Spectators stand on scaffolding along the route of the annual Toronto Pride parade. (Mark Blinch / The Canadian Press)

“I have my political differences with Justin Trudeau, but it’s great to have the Prime Minister marching,” Mr. Rawlings said. “It just shows us how far society has come. Over the course of my life – I’m 30 – things have changed significantly. And that’s a good feeling.”

Mr. Trudeau has become something of a gay icon, with his warm embrace of LGBTQ rights.

Before the parade, he attended an outdoor church service in the heart of the city’s gay village where he sang along to Lady Gaga’s Born This Way. 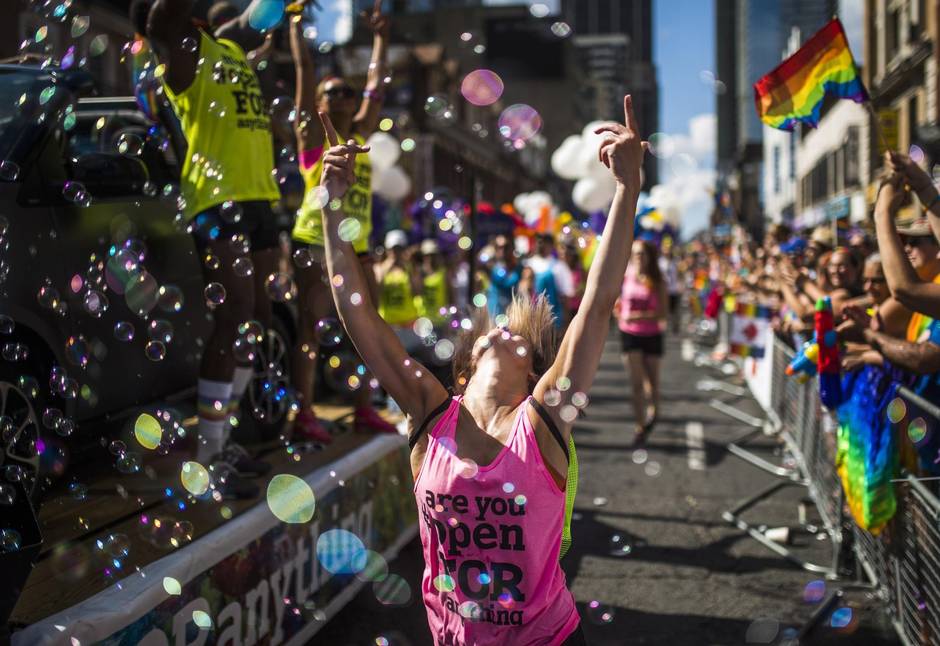 A woman dances down the parade route amidst bubbles. (Mark Blinch / The Canadian Press)

Along the parade route, he stopped to shake hands and take selfies. Anticipation of seeing Mr. Trudeau was thick along Toronto’s Yonge Street and cheers at the sight of him were among the day’s heartiest. 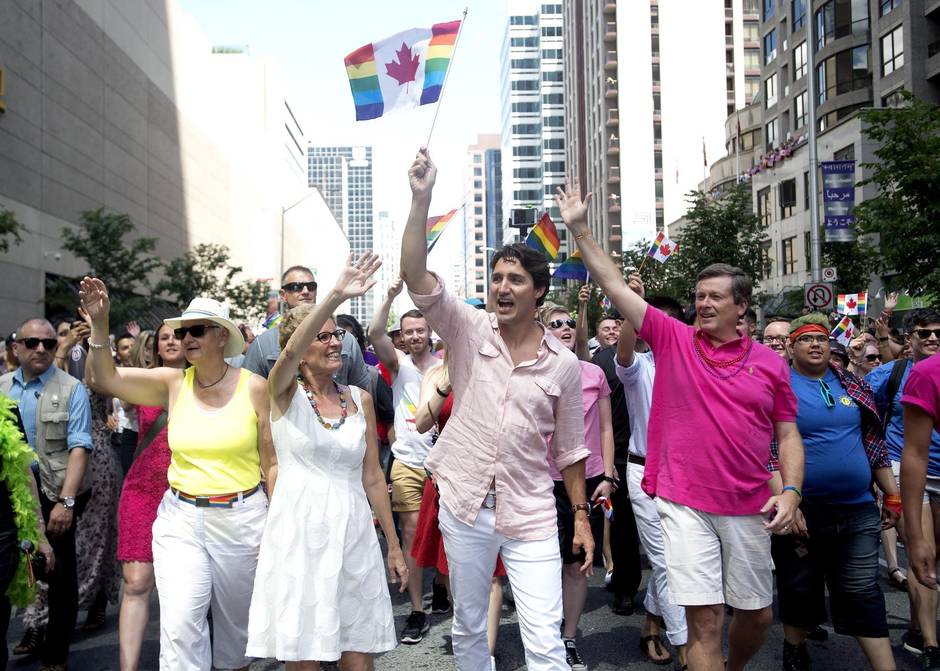 A sombre note in memory of the Florida massacre ran through Sunday’s parade.

One group carried placards bearing the names and ages of Omar Mateen’s victims in his attack on the Pulse nightclub on June 12. Mr. Mateen killed 49 and wounded another 53, most of them LGBTQ, in the worst-ever mass shooting in the United States. 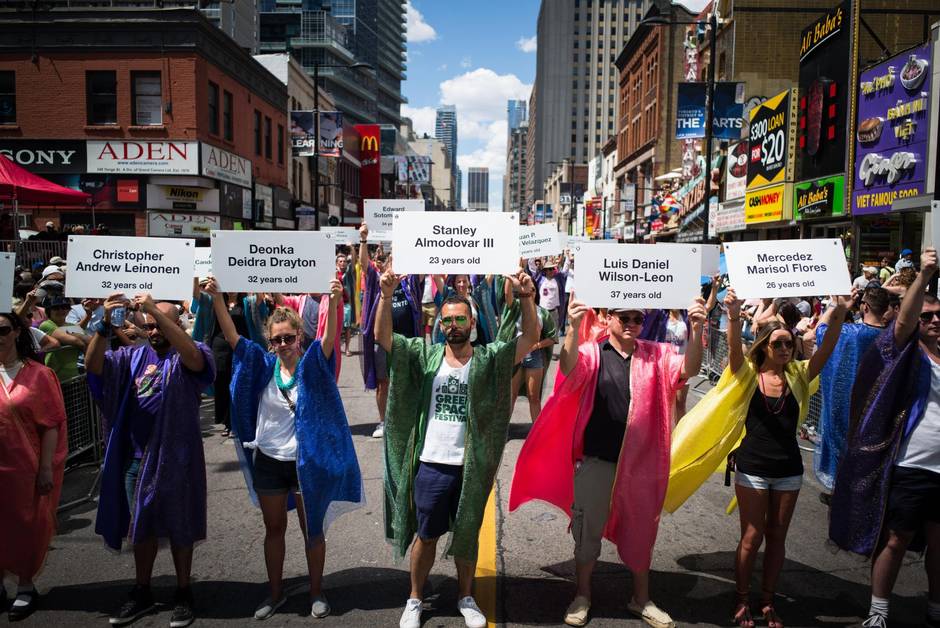 Participants display the names of the Orlando shooting victims during a moment of silence. (Ian Willms / Getty Images)

Leah Fearman said this Pride parade was especially meaningful to her in light of the Orlando attack.

She went to a vigil in Peterborough, Ont., after the shooting but said: “This kind of event brings together a more positive solidarity.”

It indicated, she added, that “things will get better.”

At 3 p.m., a moment of silence was announced to commemorate the shooting. But not all marchers remained silent, perhaps as the result of miscommunication, and festive music continued to blare even as many stood stone-faced.

The lull also gave rise to another display of political protest, as Black Lives Matter activists rushed to an intersection along the parade route and blocked it with a sit-in. 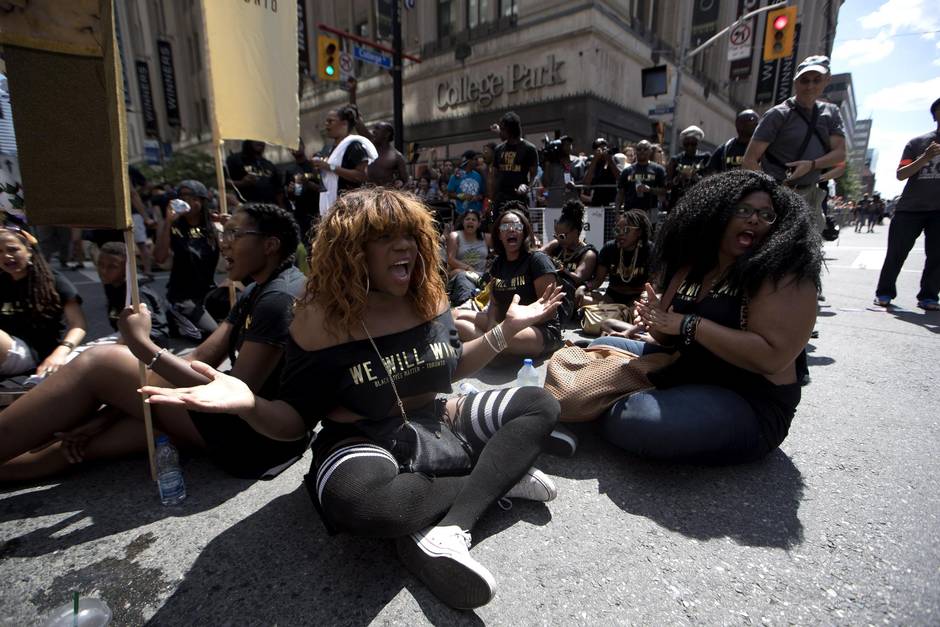 Members of the Black Lives Matters movement stage a sit-in at the Pride parade. (Mark Blinch / The Canadian Press)

Two dozen activists holding bullhorns and fake coffins sat cross-legged in the intersection and yelled “Shut it down” and “We will not be moved” as police looked on.

The militant anti-police brutality organization was controversially included as this year’s honorary group in the parade.

The float received its loudest applause when it finally continued down the route some 15 minutes after stopping. 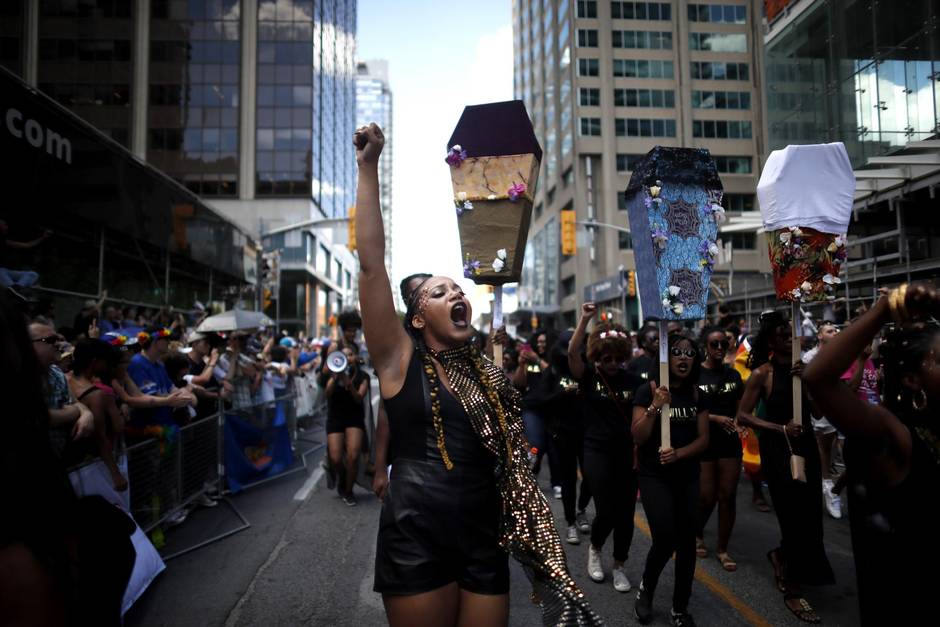 “There’s a time and place for this,” said Derek Milroy, one of many parade-watchers who grew frustrated with the display. “It’s not about them. It’s gay pride, not black pride. … Everyone’s trying to enjoy themselves and they’re turning it into a bad spectacle.” But the tense moment drew plaudits as well as jeers, as some in the crowd joined in the group’s chant of “Black lives, they matter here.” 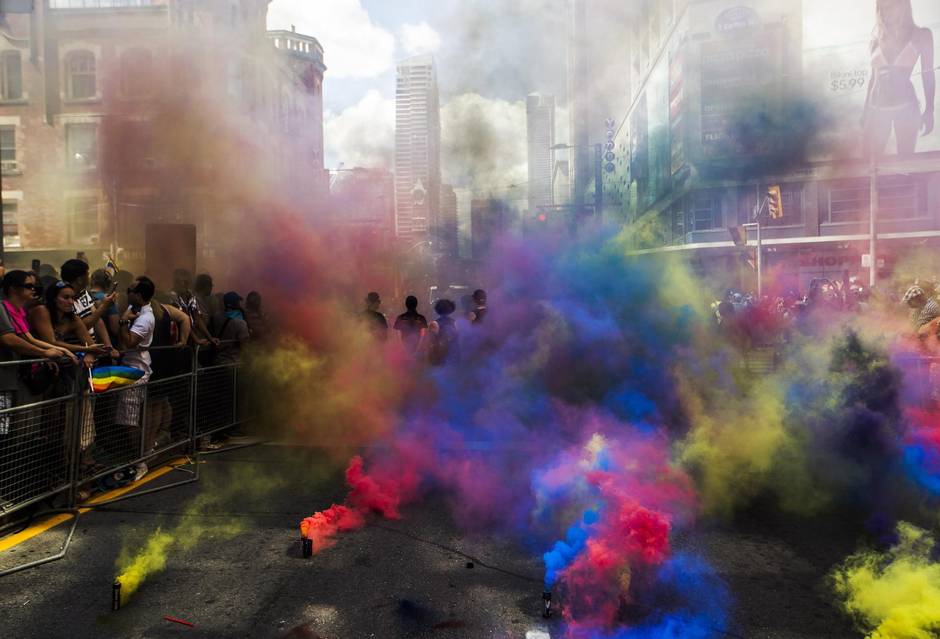 Tamar Austin, a black woman watching nearby, was among those who appreciated the fierce display of complex political attitudes.

“I think it’s great that the parade is embracing intersectionality,” she said. Some people seemed uncomfortable, she added, “but I heard someone else say, ‘This is what Pride is about.’ We’re making strides in the end.” 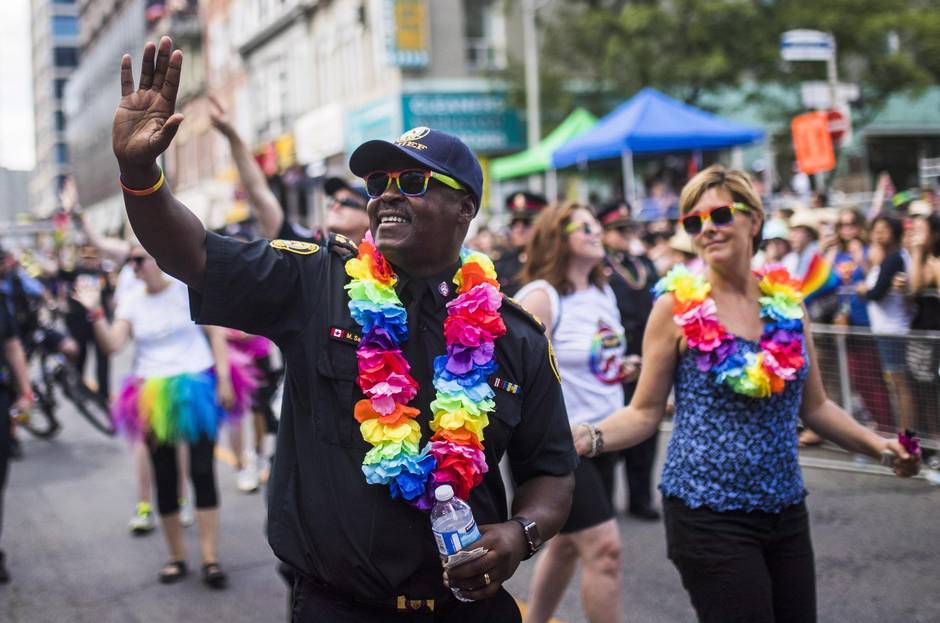 As always, marchers in the parade ranged from the militant to the playful: AIDS research activists alternated with leather-bedecked bikers sporting purple hair.