A new subway to Scarborough? Really?

The subway that Ottawa backed this week with a $660-million grant would cost at least $2.5-billion and take a decade to complete. To those who consider subways strictly a downtown thing and Scarborough a faraway suburb of which we know nothing, the idea seems a little nutty.

Some critics say Scarborough doesn't have the population density to fill a subway, others that the subway is in the wrong place. Transportation Minister Glen Murray, who prefers a different subway route, warns against building subways "to nowhere."

Travel along the proposed subway route by car, and it seems at first that he has a point.

The project would extend the Bloor-Danforth line from its current terminus at Kennedy Station. It would track Eglinton Avenue East then curve north to follow McCowan Road all the way to Sheppard Avenue, stopping at stations at Lawrence Avenue and the Scarborough city centre.

For long stretches of the 7.6-kilometre northward journey, a driver passes through classic suburbia – block after block of squat post-War bungalows interrupted by mid-rise apartment buildings or mini-malls. Many of the houses have carports along the side, metal awnings with serrated edges shade front windows. Side streets have genteel names like Hollyhedge and Bellechasse.

Even some locals find it hard to imagine a subway through these parts. "Realistically, it doesn't make any sense," says, Lola Adeoye, 29, leaving her beat-up car running as she pops into a convenience store. She works in North York, so the subway wouldn't do her much good. She would rather see the money spent on better child care, better roads or more bus service than "a stupid subway line. That's just a waste of time."

Kevin Hart, 36, owner of the clothing shop next door, says it's all politics anyway. "Rob Ford just wants to get revoted in, and this subway is because he wants another stronghold in Scarborough."

Travel a bit further north, though, and you begin to see why this subway is needed. As rush hour comes on, the 401 becomes a sluggish river of gleaming metal and the Don Valley Parking Lot earns its nickname. Arterial roads like Eglinton or Sheppard slow up too, making travel by bus a rolling purgatory.

Some of the worst of the congestion that is choking Toronto is encountered not downtown, but in the suburbs like this. A sensible transit plan would include the badly needed Downtown Relief Line, but serve the growing suburbs, too.

Scarborough is not nowhere. It is home to 625,000 people, more than live in Halifax and Regina combined. Many of them are immigrants who rely on the TTC to get to far-away jobs.

Getting her hair done in Babhi's Hair Salon at McCowan and Sheppard, receptionist Zara Raza, 24, calls the subway proposal simply "awesome." She finds local buses crowded and slow. A subway would whisk her straight downtown to the Yonge line at Bloor Street.

Anna Gauthier, 49, likes the subway plan, too. "It needs to be done. We need it so bad," she says as she waits for a train on the Scarborough RT line, a light-rail spur that runs from Kennedy subway station to the Scarborough city centre. She drives to the line from her home in Markham, takes it to Kennedy, travels by subway all the way to Bathurst and then boards a streetcar. The commute takes her an hour and 40 minutes.

Michael Francis, owner of the Kitchen King West Indian restaurant near Sheppard and McCowan, says a Scarborough subway is a long-term investment that his kids and grandkids will enjoy. "Paying a little more tax for something like that, it's like paying my mortgage."

Some form of new rapid transit to Scarborough has always been in the cards. Mayor Rob Ford wanted to extend the Sheppard subway eastward, but could not summon the funding or support for the expensive project. A second plan, still possible if governments fail to reach a deal to build a subway, would have replaced the Scarborough RT with a new, more modern form of light rail along the same path. It would have more stops than the subways – seven – and go further east. Mr. Murray's plan would put an above-ground subway on the RT route instead, while the one backed by Ottawa and Toronto city council would go underground along the McCowan route.

Both subways would do away with the time-consuming transfer from light-rail to subway at Kennedy station. But the Murray subway would be slower and noisier as it negotiates the sharp curves and rises of the old RT right-of-way. Moving above ground, it would be more exposed to the weather, too, inviting more breakdowns. A Forum Research poll released this week showed that Toronto residents clearly prefer the McCowan plan.

A city report estimates the McCowan subway would have 36 million riders a year by 2031. An assessment by transportation planning staff says it would draw 14,000 riders an hour at peak times, compared to 8,000 estimated by the TTC for a light-rail line. That is at the low end for subway ridership, but proponents say it is best to have capacity for more riders in a city that is due to add hundreds of thousands of new residents in coming decades.

Travel the subway's route, and that seems only prudent. The claim that Scarborough lacks the density for a subway falls apart as you reach the Scarborough city centre. Already a vast hub of shopping malls, offices and apartment blocks, it is ripe for further development if a subway goes in. City planners have designated it as one of four city "centres" earmarked for intense growth.

Sheppard and McCowan a few blocks further north has potential, too. The subway would link up here with a new light-rail line travelling along Sheppard from Yonge. One corner is occupied by the parking lot of a Canadian Tire, another by car dealerships. This is just the sort of place for the nodes of suburban density – office, residential, retail – that planners are fostering to combat endless sprawl.

The new subway may pass tracts of single-family housing as it goes, but so does the Bloor-Danforth line in places such as Pape or the Yonge line at Summerhill. London, Paris and Tokyo all run subways far into the suburbs.

In Toronto, subways already reach to Etobicoke in the west and North York in the north. An extension of the University-Spadina line to Vaughan is under way and another proposal would take the Yonge line all the way to Rchmond Hill.

Why not a new subway to Scarborough? Travel there and the idea doesn't seem nutty at all. 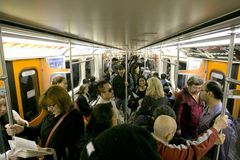