Those cases weren't as severe as the January 2011 blaze that destroyed the heritage building at the corner of Yonge and Gould Streets and sent firefighters to hospital. The 29 new charges against Stewart Poirier are mostly connected to alleged garbage fires in bins and dumpsters on city, restaurant and other private property as recently as earlier this month, according to court documents.

Two fires were at homes, including one at the Sackville Street community housing residence where Mr. Poirier lived. He was previously charged with another arson at that address.

Mr. Poirier appeared in court Tuesday, wearing an orange jumpsuit in the prisoner's box and hanging his head briefly. A bail hearing was scheduled in relation to the charges laid against him earlier this month, but Mr. Poirier was instead remanded in custody until an appearance next Tuesday.

His lawyer, Dana Garrick, said outside court that his client had also been homeless and living in shelters in recent years. He said Mr. Poirier has mental health issues but no major mental illness.

"We're at a very early stage," said Mr. Garrick, who has represented Mr. Poirier in Toronto since 2008.

The new charges include two counts of arson, disregard for human life and 11 counts of arson damage to property. Police said most fires took place between April and July this year, at locations including the Sackville Street community housing residence, Wellington Street, Queen Street West, Spadina Avenue and Glen Stewart Park. Three charges are in relation to a 2010 fire at a Leyton Avenue home.

Mr. Poirier was also charged with carrying a concealed weapon and uttering a threat on July 13, the day he was arrested. He was arrested on outstanding warrants for failing to comply with bail conditions and threatening death, according to police.

He was subsequently hit with nine charges, in relation to the Empress Hotel fire and another earlier in July at the Sackville Street community housing residence.

Crown attorney Rita Maxwell said outside court that the investigation is still ongoing. "I can't tell you whether I expect any further charges at this time," she said.

Detective Debbie Harris, who has lead the investigation into the Empress Hotel blaze, said that Mr. Poirier was informed of the new charges at the Toronto West Detention Centre on Sunday. 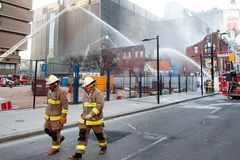