Embattled Toronto Mayor Rob Ford said that he's quit drinking and that "guaranteed, 100 per cent" voters won't see him publicly intoxicated again – even as he admitted he couldn't remember how many times he had used drugs.

Mr. Ford made the comments during an interview on CP24 Tuesday afternoon, after laughing off Mr. Drew's question of whether he does crack cocaine.

"I did it maybe once, I don't remember," Mr. Ford said. Just moments later, he appeared to reconsider "but no, I do not do drugs."

Mr. Ford admitted that he's "drunken to excess at times" in the interview, but told Mr. LeDrew that he's dealing with health-care professionals to curb that. He said he hasn't touched a drop of alcohol for the past three weeks, after a "come-to-Jesus moment," and said that he is done with drinking for good.

When asked by Mr. LeDrew about a police investigation that targeted both the mayor and his friend, alleged drug dealer Alessandro (Sandro) Lisi, Mr. Ford said he wouldn't comment on Mr. Lisi's court case, but questioned the cost of the investigation. Mr. Ford went on to ask why police had interviewed his former staffers about an incident that happened on St. Patrick's Day, 2012, when Mr. Ford was allegedly intoxicated at the Bier Markt restaurant in Toronto.

"I didn't even know Mr. Lisi two years ago," Mr. Ford said during the interview.

But according to character reference letter dated June 4, 2013, and signed by Mr. Ford, the pair have known each other since at least 2010, when Mr. Lisi allegedly did "volunteer work" on Mr. Ford's campaign. Mayor Ford's latest interview happened just a day after many of his mayoral powers were transferred to Deputy Mayor Norm Kelly.

On Tuesday afternoon, Mr. Kelly told reporters he on pursuing a similar agenda of fiscal conservatism as Mr. Ford's, but with a more co-operative style

Mr. Kelly, who held an hour-long meeting Tuesday with the city manager, the city clerk, and the mayor's chief of staff, seemed in good spirits, smiling and joking with reporters.

"There will still be a commitment to fiscal conservatism, but it may be expressed in a more co-operative [way] and more sensitive to the arguments and positions of others," he said.

Mr. Kelly added that details of the transfer of staff away from Mayor Ford's to his are mostly ironed out, but declined to go into details. "But what I'm looking for is people who are policy-oriented that enjoy debate, have a sense of adventure and want to have some fun. You want a good, collegial atmosphere where everyone has the feeling that they can make a contribution."

His comments come as politicians at both Toronto City Hall and Queen's Park expressed a desire to move on from the sideshow that has been surrounding the mayor for the past six months – including bombshell admissions of alcohol and drug abuse, allegations of sexual harassment and abuse of employees – and dealing with local concerns.

The Ford scandal has pulled attention away from other important issues, including the province's economic woes and hefty deficit, Progressive Conservative Leader Tim Hudak said Tuesday.

"I know that there are a lot of goings on at City Hall. It is an important issue. We haven't seen anything like this, at least in my time in politics, I understand that," he said.

"But there are other issues that we need to deal with in the province of Ontario. We lost almost 800 jobs in Heinz in Leamington. We're bleeding red ink," he said, referring to the closure of the ketchup plant in Southwestern Ontario last week.

Several Toronto city councillors said they were relieved Tuesday morning that things seemed to be returning to normal.

"I'm in Toronto-East York Community Council, where we're discussing the Mirvish-Gehry development proposal and height exemptions and speed humps and patios and traffic signals," Councillor Josh Matlow said. "And while there may not be a CNN exclusive on the work we're doing today, it's the very reason that most councillors ran for office, to focus on improving our communities. And that's what most councillors are doing today."

"The deputy mayor has had, I believe, an agenda that's very similar to the mayor's. The chairs of the standing committees were all appointed by the mayor and none of that has changed," Mr. Matlow said.

Councillor John Filion, whose motion it was to curb the mayor's authority, echoed that it was "nice to get back to normal business" and that there's a sense of optimism among councillors.

"In coming together to deal with the situation with the mayor, it's become clear that we have much more in common than we thought as far as what we're trying to achieve for the city," he said. "I think there's a very large number of councillors who want to seize on that opportunity to start rowing in the same direction."

Denzil Minnan-Wong, who is expected to run for mayor, predicted that councillors will rise to the occasion on the city's priorities, including watching spending.

"There will be leaders in council emerging who will be continuing to drive a fiscally conservative agenda," he said Tuesday. "In the absence of the mayor, given the mayor's weakened state, it will be up to others to continue to carry that message forward and to carry the flag."

Amid the passing of a series of historic motions Monday that essentially stripped him of his mayoral powers, Mr. Ford became the focus of a number of public spectacles at City Hall, one which saw him racing across the council floor during a shouting match with members of the public, accidentally knocking over Councillor Pam McConnell in the melee.

At another point Monday afternoon, Mr. Ford was seen pantomiming drunk-driving at Councillor Paul Ainslie during council debate, a reference to Mr. Ainslie's driving suspension last spring after a breathalyzer test. Mr. Ainslie was never charged in that incident.

The subject of Mr. Ford's consternation was council's action to transfer many of his mayoral powers to deputy mayor Norm Kelly, a move aimed at restoring order to City Hall after months of scandal.

Mr. Kelly will now oversee the bulk of the mayor's staff and budget, as well as chair the city's executive committee.

Mr. Ford has responded by calling the move "undemocratic," hiring an expert in municipal law and threatening to take legal steps against the council's move.

But Ontario's Municipal Affairs Minister said that Toronto city council's decision was legal and within the bounds of their authority.

Asked if councillors were operating within the bounds of provincial laws, she replied: "Absolutely. Yeah. I think they took steps that were part of their delegation power and they took measures that they felt were reasonable."

She said the province will now be dealing with Mr. Kelly on civic issues instead of Mr. Ford.

The minister said she had not received any legal papers from Mr. Ford, but was not concerned at the prospect of a court challenge.

"I'm not worried," she said. "I think that certainly everyone has an opportunity to speak to legal counsel about decisions they think are fair or not fair."

The mayor and his actions have been the subject of intense scrutiny for the past six months, after media reports first surfaced in May about a video that reportedly shows Mr. Ford smoking crack cocaine. Toronto Police chief Bill Blair has since confirmed the existence of the video, and said that police are in possession of it.

Around the same time, a police document that detailed a months-long investigation targeting the mayor and his friend, alleged drug dealer Alessandro 'Sandro' Lisi, was released to the public. That document described months of mysterious meetings between the mayor and Mr. Lisi, as well as a long list of allegations against the mayor by former staffers, including alcohol and drug abuse, a suspected prostitute at City Hall, drinking and driving, and sexual harassment. 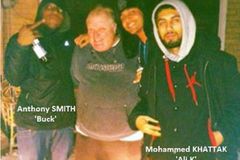 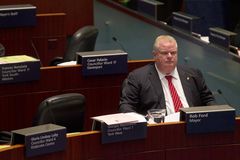 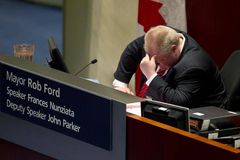 Follow Ann Hui, Adrian Morrow, Oliver Moore on Twitter @annhui @adrianmorrow @moore_oliver
Report an error Editorial code of conduct
Due to technical reasons, we have temporarily removed commenting from our articles. We hope to have this fixed soon. Thank you for your patience. If you are looking to give feedback on our new site, please send it along to feedback@globeandmail.com. If you want to write a letter to the editor, please forward to letters@globeandmail.com.
Comments