No Casino Toronto, the grassroots group started by three women around a dining room table in Etobicoke, says it has the backing of at least half a million residents, including former Governor-General Adrienne Clarkson, former Ontario attorney-general and chief justice Roy McMurtry, and Bill Davis, the Conservative premier who introduced lotteries to the province in 1975 with the first Wintario draw.

"It's staggering," said Maureen Lynett, who began the anti-casino campaign with her sister and cousin last summer, and has seen support swell in recent months.

A major test of that support will come Monday as Mayor Rob Ford's executive committee sits down to begin two days of meetings over plans by the province to expanding gambling in the Toronto area. Close to 200 people have signed up to speak at the meeting, but it is unlikely all will be heard. The mayor hopes to cut off public comment at 8 p.m., reserving the second day for questions of staff and debate.

"Any registered speaker who is not called before the end of time scheduled for presentations is encouraged to submit their comments in writing to the Committee," reads a motion from the mayor, released late Friday.

Ms. Lynett said she does not know her group's place in the list of speakers, but believes that given the chance, she will voice an opinion shared by many.

"The tide has turned," said Ms. Lynett, who bases her prediction on the fact that many of the group's supporters, such as residents' associations, represent thousands of Torontonians.

To demonstrate that momentum, the group has taken out a full-page ad in The Globe and Mail Saturday, featuring signatures from a cross-section of supporters from what Ms. Lynett calls "movers and shakers," to community groups and "ordinary" Toronto residents.

The group also represents a range of political perspectives from right to left, she said.

Next week's debate at executive committee will focus on the report by the city manager, which includes staff findings on the impact of expanding gambling in Toronto with a new casino complex downtown and an enlarged facility at the existing site at Woodbine Racetrack.

In an unusual move, The report gives committee members two options – an outright rejection of provincial casino plans or approval with a lengthy list of qualifications to be met by Ontario's gambling agency and the province.

Councillor Denzil Minnan-Wong, a member of the mayor's executive committee who is opposed to expanding gambling, on moral grounds, said he expects there will be additional qualifications attached to a yes vote by committee members at the two-day meeting.

Councillor Michael Thompson, chair of the economic development committee, told The Globe and Mail this week that he is willing to vote yes on the casino plan, but with the added stipulation that a downtown casino bring the city between $111-million and $148-million in annual hosting fees from the province.

That range is in the city manager's report but is higher than the $50-million to $100-million estimate provided this year by Ontario Lottery and Gaming Corp. A firm figure from OLG on a provincewide hosting formula is not expected until later this month. Ontario Premier Kathleen Wynne sent OLG officials back to the drawing board after the Globe and Mail reported their original hosting fee estimates were giving Toronto a special deal.

Editor's note: Maureen Lynett's name was misspelled in an earlier version of this story. 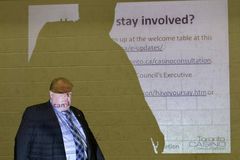