York Regional Police are investigating after two large swastikas were carved onto the green at a Richmond Hill country club Saturday morning.

This is just the latest in a string of anti-Semitic vandalism in the Greater Toronto Area this year.

In June, a young rabbi and his family found swastikas scrawled above the side door to their Toronto home. Inside their garage, they found "Watch your children" written along with more swastikas. The Nazi symbols were reportedly spray-painted on at least three homes in Richmond Hill in January this year.

According to Avi Benlolo, President of the Friends of Simon Wiesenthal Center, there has been a recent upswing in this kind of anti-Semitic behaviour in Canada.

"The unfortunate reality is that it's not new to us," Mr. Benlolo said. "But, it doesn't mean that it should be accepted.

"[It's] a problem for everyone," he said. "It shows that we have racists and bigots in our midst."

That vandalism was discovered by a maintenance worker at the Richmond Hill Country Club, located in a predominantly Jewish neighbourhood that's home to many of the GTA's synagogues. The swastikas, six-feet and three-feet in diameter, were carved into the green at Hole 14.

The symbols were in an area that the club director, Doug Young, described as the middle of the course and were not visible from the road.

"It seems to be an unfortunate act of random vandalism," Mr. Young said. He and his staff posted notices and apologized to golfers and club members for the offensive nature of the vandalism.

The groundkeepers at the course acted quickly to remove and resurface the area. Mr. Young says the turf should be fully recovered in 3-5 days.

These steps were commendable, according to Detective Brett Kemp, handling the case through the York Regional Police Hate Crime Unit. "There's obviously very strong, hateful and genocidal ideology attached with the symbol that was scrawled on the property," said Det. Kemp.

York Regional Police could not confirm if the event was caught on tape by the surveillance video.

Det. Kemp noted that cases like this fall into the property damage category where the solvability relies on potential witnesses. 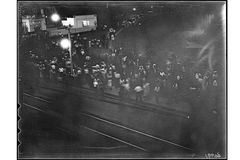