Mark Saunders says he hadn't really absorbed the meaning of his appointment until he talked to his son. "Dad, that's history," the 10-year old told him.

In a better world – a world that is dawning right here in Toronto – the race of the new chief of police wouldn't matter. Deputy Chief Saunders would make an excellent leader of the city's police force regardless of the colour of his skin. But in the world we live in now, the naming of Toronto's first black chief truly had the ring of history.

It wasn't long ago that the police service was made up almost entirely of big white men. Today, 23 per cent of uniformed cops belong to racial minorities and 18 per cent are women. Toronto has changed, evolving into a racially diverse metropolis that is an example to the world of successful co-existence. The rise of Deputy Chief Saunders to one of the top jobs in the city epitomizes that success.

Saunders was born in England to a Jamaican family and moved to Canada as a child. In his 32 years on the force, he has moved steadily up the ladder. He told reporters on Monday morning that if his success "offers any hope to anybody, if a person of colour feels that this gives them hope, then I'm glad that it does …"

If his appointment sends a message about inclusion, it also sends a message to a city that still struggles with issues of crime and race. Anyone who does even a quick scan of the crime pages will find that young black men show up in disproportionate numbers. The new chief could help tackle this troubling problem.

It is critical in any multiracial city for the police to reach out to minority or disadvantaged communities. Outgoing chief Bill Blair did an excellent job of this, but some community groups soured on him over the fraught issue of carding – the police practice of collecting information on people they stop and question but do not detain.

Chief-designate Saunders seems to have the diplomatic skills to smooth community relations. He comes across as smart, affable and funny.

He promises to listen to the complaints about carding and work through the issue. "I want to sit down. I want to talk. I want to hear."

He said that community safety comes first – an indication, perhaps, that he thinks some form of carding is valuable because the information that police garner can prevent or solve crimes. He also acknowledged there could be "collateral damage" from the practice.

"Everyone's starting to get a little antsy over it," he said about carding, "but let's work together. Let's find solutions."

That set the right, practical tone after a period of months in which the chief and the police board and community groups wrangled endlessly over the issue.

In his brief remarks at police headquarters, Deputy Chief Saunders played down the issue of his race and tried to tamp down expectations. "Being black is fantastic. It doesn't give me superpowers."

All the same, his appointment is an encouraging sign for a city that revels in its diversity and needs to make sure this marvellous experiment keeps working. 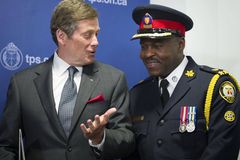 Toronto Police Chief Blair defends legacy on carding against board chair
May 13, 2018 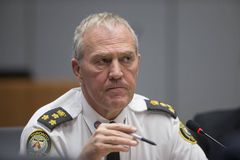 Vancouver’s new police chief in no rush to make changes
May 13, 2018 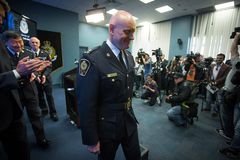