Five Toronto men face fraud and conspiracy charges in a scam that allegedly deployed phony debit cards to swindle the Toronto Transit Commission out of more than $180,000, police and TTC officials said Tuesday,

Vending machines not yet protected by PIN-chip technology were targeted and the passes were sold on the black market, police said.

In 2010, the TTC was estimated to have lost about $20-million in fare evasion, out of a total of about $1-billion in revenues, TTC spokesman Brad Ross said. In this instance, however, its losses were covered by the banks, in line with usual practice when a card-holder is defrauded.

The alleged scam began to surface a few months ago and police were notified in September, triggering a complex investigation, Staff Insp. Mark Russell of the TTC's special investigations unit told a press conference, where an array of compromised debit-card pads were displayed, together with assorted forgery tools.

Video images from subway stations were key to the arrests, he said.

"We started to accumulate images of the suspects and identified trends and patterns in their usage and the routes they would take when they were using the skim cards. About two weeks ago we developed an operational plan with the police fraud squad and started conducting surveillance last week."

In all, the suspects were found to be in possession of 168 counterfeit debit cards and 29 TTC monthly passes.

However, the full scope of the alleged scam is likely much larger, police said.

Four of the suspects were arrested last week after buying passes at North York Centre Station.

The fifth was picked up soon after.

Police then searched a west-end residence belonging to the alleged ringleader of the group and discovered a lab containing the PIN pads and other items. 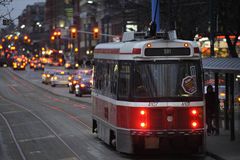 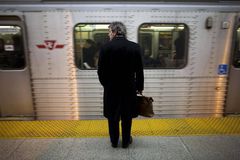