An unabashedly atheist minister who does not believe in the Bible should be defrocked for her beliefs, a United Church committee has recommended in a split decision that seems likely to stir further dissent in the church.

In its unprecedented report, the reviewing panel said Gretta Vosper would not be ordained were she applying today given her extreme beliefs.

"She is not suitable to continue in ordained ministry because she does not believe in God, Jesus Christ or the Holy Spirit," the report by the Toronto Conference interview committee states.

"Ms. Vosper does not recognize the primacy of scripture, she will not conduct the sacraments, and she is no longer in essential agreement with the statement of doctrine of the United Church of Canada."

Not everyone on the interview committee, comprising 23 lay and ordained members of the church, wanted to see Vosper gone. In a dissenting view, four members concluded that Vosper was "suitable" as a minister. The church has evolved since its founding and must continue doing so to meet the spiritual needs of Canadians, they argued.

"Many of Ms. Vosper's theological positions, while not in the mainstream, are not unique amongst the ministers and lay persons of the United Church," the dissenters said. "The United Church has a history of welcoming theological diversity, and to find Ms. Vosper unsuitable could stifle exploration and stunt that diversity."

Vosper, 58, who has been fighting to keep her job as minister of her supportive West Hill congregation in east-end Toronto, seized on the minority view. What it shows, she said in an interview Thursday, is that a "significant number" of people in the church share her views.

"This conversation is not over and indeed might get ramped up," Vosper said. "This has been a very adversarial process and so that, in and of itself, has cost the United Church greatly."

In June, Vosper appeared before the committee to defend her views, arguing she was on the receiving end of a church inquisition. She argued against a "singular definition" of God and pleaded for ministers and members to be allowed to explore and define their own ideas.

The committee, however, felt Vosper had gone far too far.

"Although the United Church of Canada is a big tent, welcoming a diversity of theological beliefs, Ms. Vosper is so far from centre of what holds us together as a United Church that we have concluded that she is not suitable to continue as an ordained minister," the report states.

"The committee is not recommending any form of remediation because Ms. Vosper has been so clear and unequivocal about her beliefs."

The conference's sub-executive will receive the panel report next week and Vosper and her supporters will be able to speak to its findings. The executive will then decide whether to ask the church's governing body for a formal disciplinary hearing that would ultimately decide on whether to fire her.

Rev. David Allen, the executive secretary of the Toronto Conference, acknowledged the divergent views on Vosper. Whatever the outcome, he said, there will be "fallout."

"There will be a lot of people who are going to be disappointed and angry if (defrocking) were to happen," Allen said. "At the same time, over the months we've heard from probably an equal number of people who would be dissatisfied if she were allowed to stay."

Randy Bowes, chairman of the West Hill board, said his biggest concern was the message the report sends to other United Church congregations, which make up the country's second largest religious group.

Vosper, who was ordained in 1993 and joined her West Hill congregation in 1997, has been upfront about her beliefs for years.

Things came to a head after she wrote an open letter to the church's spiritual leader following the Charlie Hebdo massacre in Paris in January 2015 in which she pointed out that belief in God can motivate bad things. 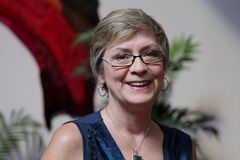