Barry Sherman was on a family vacation in the Serengeti several years ago when he decided to jot down a few reflections on his life and career.

There is no God, no free will, no altruism and no morality, Mr. Sherman wrote in what he titled A Legacy of Thoughts. "I find no inconsistency in holding intellectually that life has no meaning, while at the same time being highly motivated to survive and to achieve," he added.

Mr. Sherman, who was found dead at his home in Toronto on Friday, certainly achieved much in his life. He founded a global generic drug maker, Apotex Inc., which revolutionized the pharmaceutical industry in Canada and made him one of the wealthiest men in the country. He also became a renowned philanthropist, donating to scores of charities and dabbled in politics as a key financial backer of the Liberal Party. He even beat prostate cancer at the age of 65, declaring after successful surgery in 2007 that he had no intention of retiring. "I'm just getting started," he told The Globe and Mail. "I'm a kid just out of school."

But Mr. Sherman, who was 75, was also a ruthless fighter capable of waging as many as 100 lawsuits at a time against business rivals and spending the past ten years of his life battling a group of cousins in court. That family feud was especially painful for Mr. Sherman who frequently expressed frustration at his relatives after they demanded as much as $1-billion for allegedly cutting them out of Apotex. For someone who largely shunned the limelight, the court proceedings were particularly difficult because they exposed so much of the family's troubled history.

Mr. Sherman started life as a shy, awkward, boy who had few friends and didn't do well in school. His father, Herbert, ran a zipper manufacturer in Toronto and young Barry would occasionally turn up to help. One Saturday, Mr. Sherman packed so many more zippers into boxes than did the paid employees that his father actually checked each box to make sure he had counted correctly. The elder Mr. Sherman died when Barry was nine years old, forcing his mother, Sara, to head back to work as an occupational therapist. Mr. Sherman threw himself into his studies, eventually graduating in engineering physics from the University of Toronto and going on to complete a PhD at the Massachusetts Institute of Technology with a thesis on satellite technology.

His uncle, Louis Winter, became something of a father figure and Mr. Sherman spent several summers during his university years working at Mr. Winter's company, Toronto-based Empire Laboratories, which made cheaper versions of Aspirin, saccharin and Valium. Mr. Winter died suddenly in 1965 and his wife, Beverley, passed away just 17 days later. Their four young sons, Mr. Sherman's cousins, were adopted by another family.

Mr. Sherman and a friend, Joel Ulster, bought Empire for $250,000 and sold it in 1972 for around $2-million to ICN Pharmaceuticals, a U.S. company that was buying up generic producers. Mr. Sherman and Mr. Ulster went on to create Apotex, which was such a money-losing venture at first that Mr. Sherman's wife, Honey, urged him to close it "before he lost everything."

His big break came in 1980, when Apotex was first to market with a generic version of the blood-pressure drug propranolol, which raised the company's profile with pharmacies. Soon, Apotex was churning out dozens of products and challenging the patents of big drug companies, ready to cash in with lower-cost generic versions. By the mid-1990s, Apotex had 40 per cent of the generic market in Canada and Mr. Sherman had gained a reputation for aggressively lobbying the federal government to change drug-patent rules. He always claimed to be on the side of consumers and boasted that he saved the government billions of dollars a year by providing lower cost health care.

Just as Apotex was taking off in the late 1980s, Mr. Sherman unexpectedly reunited with the four Winter boys. They had not fared as well. A couple had turned to drugs and one later died of an overdose. None of them had gotten much from their father's estate. They were entitled to about $330,000 each from the sale of Empire but their adoptive parents spent most of the money and the boys blew through the rest when they turned of age.

After meeting them by chance through a mutual friend in 1988, Mr. Sherman became a benevolent cousin. He bought them houses, gave out cash and provided loans for an assortment of business ventures.

At one point, the boys began asking questions about Empire and they eventually came across the purchase agreement that they alleged contained provisions Mr. Sherman had ignored, including providing them with financial security. They also alleged that Mr. Sherman used the assets of Empire to create Apotex and had not properly compensated them. In 2006, they sued, demanding an ownership stake in the generic drug giant. "Losing our parents at such a young age is tragic, but what happened after their deaths is unbelievable," Kerry Winter, one of the orphaned boys, said in launching the lawsuit. "Barry's father died when he was young, and my dad took him under his wing and taught him the family business. It's disappointing that we're fighting this way now."

The legal fight turned ugly, with allegations flying that Mr. Sherman had plotted to kill Mr. Winter and that he used handouts to control the cousins. Mr. Sherman hit back by calling in their loans and moving to seize their houses. The suit finally ended last September when Ontario Superior Court Justice Kenneth Hood threw out the case, ruling that "the claimed interest in Apotex was wishful thinking, and beyond fanciful."

Mr. Sherman insisted all along that he had done his best for his cousins. "I help all kinds of people because I know I'm very successful and I feel an obligation to help friends, family, and strangers, too," he told The Globe in 2007. "Who, even amongst wealthy people, would spend countless millions of dollars trying to help cousins make a living? For nothing in return? I've done all I can." 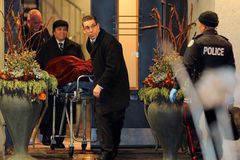