Last month, Anthony Wright sold his Mississauga townhouse for more than asking. He still feels badly about it.

Mr. Wright's agent, Lynne Tham, listed his house on a Monday and accepted offers one week later. Six real estate agents came in and made an impassioned plea for their clients. Mr. Wright, a single father of three girls who deals with stressful sales situations in his professional life, was overwhelmed.

Most of the agents followed protocol and came alone. Except one, who had figured out that his client, a single mother of three, had some things in common with Mr. Wright.

"He actually brought the client in with him, which was so unusual," says Ms. Tham. He hoped that his client might be able to persuade Mr. Wright to choose her offer.

"She was a nice-looking lady and she was dressed up, she came in looking like a million dollars, she wanted to plead her case," Mr. Wright says. "It was extremely emotional and stressful, because she was trying to explain her situation, that she was in love with the house and needed it because she has her three daughters and is trying to do her best. She was extremely nervous and said she couldn't sleep."

But she wasn't the highest bidder, and Mr. Wright rejected her offer. "I'm glad that I got $20,000 over my asking price, but I really feel sorry for the lady," he says.

His agent, a seasoned professional, was surprised by the whole ordeal. "It was mind-blowing how much we actually got," Ms. Tham says. "But it's so tiring for these bidders, because this might be the third or fourth time that this has happened to them in a week and a half, so they're exhausted. On a human level, you just feel really bad for them."

Bidding wars are not a new phenomenon in the Greater Toronto Area, but in 2012, the stakes have been ramped up. Case in point: the Willowdale bungalow that sold for $1,180,800 this month - $421,800 over the asking price. Fuelled in part by historically low mortgage rates, an influx of foreign money and a lack of housing stock, many prospective buyers are now stretching their finances too thin in order to get a home. This, at a time when economists say Toronto house prices are already too high and Canadian consumers over-indebted. Financial advisers worry about the consequences these people will face when interest rates rise and their monthly mortgage payments become less affordable. Add to that the strong possibility that house prices will fall from their current levels, and in the months to come many people who are getting caught up in the current frenzy may come to regret the battle they fought so hard to win.

Benjamin Tal is deputy chief economist at CIBC. In his view, "there is no debate any more that the housing market, regardless of where you live in Toronto, is definitely expensive," he says. "It's too expensive, it's overshooting." And it's only going to get worse in the near future.

March and April are traditionally the peak time of year for house sales, with many families seeking to buy now so that they can take possession during the summer and avoid having to pull their kids out of school before June.

"It's prime time for sellers and for buyers," says Jim Murphy, the CEO of the Canadian Association of Accredited Mortgage Professionals.

At the same time, the major banks brought back 2.99-per-cent fixed-rate mortgages last week, after experimenting with them in January. These ultra-low rates are only available for a limited time, and are therefore expected to lure even more prospective buyers into the market this season.

With interest rates low, more people are overextending themselves. The proportion of homeowners with less than 20-per-cent equity in their home and a debt-service ratio of more than 40 per cent has risen from about two per cent to about six per cent in the last five years or so, says Mr. Tal.

He believes a housing price correction is inevitable, but that its severity will depend on whether mortgages and house prices continue to grow too quickly or whether they are successfully reigned in before interest rates rise.

While it doesn't take much to spur a bidding war in a hot Toronto neighbourhood right now, in some cases the frenzy is manufactured.

"There's obviously a strategy on the part of some realtors to under-price a property to try to get a bidding war going," says Mr. Murphy. "This is not an unusual tactic at all."

It's one that can be highly successful, says Geoff Leonardelli, an associate professor at the University of Toronto who works in both the business and psychology departments.

"There is some pretty amazing research on this notion of bidding wars, and one striking finding is that when the price of a product starts low in an auction-type contest, it actually creates auction fever where more bids result in it being bid up higher than what it might have been had it started at a higher price to begin with," he says.

One recent seller in North Toronto who did not want to be named said she was surprised when her agent suggested she list her house at a much lower price than she wanted.

"I said 'I know what I want for this house, and if you set the price lower and someone comes in just above it, I will not accept it,'" she said. "And he said 'it's a risk, but I think it's a risk that pays off because it opens up the amount of people who will come look, and then people get attached to the house.'"

Her house sold for more than 12 per cent over asking.

Mr. Leonardelli says it's also easier to part with cheap money. "With low interest rates, money becomes more easily available and that means people are in a position to more willingly spend it."

And with each bidding war, prospective bidders can become a little bit more desperate to get the hunt over with.

"If there is a good property on the market and five offers come in and it sells over asking price, there are four people who are very disappointed," says Perry Steinberg, a real estate broker with Harvey Kalles Real Estate Ltd.. "So next time they'll probably go in at a higher price."

A rise in the number of foreign buyers is also fuelling the market. The woman who bid $421,800 over the asking price for that house in Willowdale was originally from China. Roy St. John, vice-president of Re/Max Condos Plus Corp., just sold a place in Don Mills to a Chinese buyer who was not in Canada but arranged the purchase through power of attorney. The person paid $1.4-million for a unit listed at $1.25-million.

Foreign money is playing a particularly large role in the condo market. Ms. Abony says she's had foreign clients buy more than a dozen suites at a time.

Despite all the pressure, many Torontonians say that they are resisting taking on large mortgage debt.

Dan Schmelzer, for one, just decided to throw in the towel after he and his agent spent six months hunting for a larger home for his family of four.

"We've given up, we're not moving," says the Willowdale resident.

"It's funny how people have reached the conclusion that adding $100,000 or $200,000 to your mortgage doesn't mean anything," he says. "People are throwing around hundreds of thousands of dollars like they're a pair of socks."

His agent, Ian Wilson of Royal LePage, says that houses in the neighbourhood are frequently going for seven- to 11- per cent over asking.

But there are signs that the banks are not willing to lend to just anybody. For instance, Toronto-Dominion Bank's mortgage arm TD Financing Services Home Inc. recently decided it will stop giving mortgages to "non-prime" borrowers (those with bad credit history or credit scores) starting at the end of this month, because the bank felt that staying in that line of business would require it to take on too much risk.

And, Mr. St. John points out, there are even bidding wars for rentals right now. "There just isn't enough product on the market," he says, especially in hot neighbourhoods. For instance, he points out that out of roughly 5,000 homes in Leaside, there are usually about one dozen for sale.

Renee Frigault and her partner started their house hunt after Christmas and are still looking. "In the last two months, we've put in offers on three separate houses, every time losing by the skin of our teeth," she says. They lost the first one by less than $5,000 because they didn't like the seller's tactics.

"The seller's agent swore that offers would be a one-shot deal," she says. "Taking them at their word, we put in our best offer and had the high bid. Then, of course, they sent back for re-bids. We were surprised by the flexible ethics and walked away."

Matthew Slutsky and his wife Carlie Brand sold their downtown condo in November and have been searching for a house ever since. They're currently staying with Ms. Brand's parents. But they refuse to give in to auction fever.

"I help sell hundreds of millions of dollars of new construction, but I can't find a resale house for myself," says Mr. Slutsky, 32, who is the CEO of real estate site BuzzBuzzHome.com.

So he and Ms. Brand have taken to going door-to-door and handing out letters at random houses they like to see if the owners would consider selling. 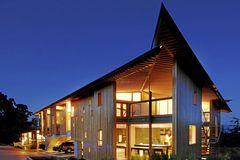 Have Toronto home sale values gone up or down? Check our interactive map
September 22, 2011 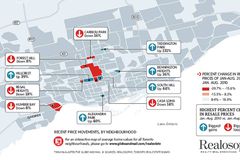 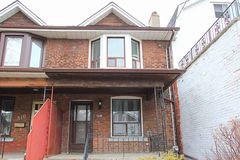 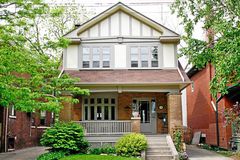