Activists from Black Lives Matter Toronto made a surprise appearance near the end of the city's Pride Parade on Sunday, entering the procession near the spot where they blockaded last year's event to demand, among other things, the exclusion of uniformed police.

Despite declining to sign up in advance and officially take part, dozens of members of Black Lives Matter inserted themselves into the parade, marching with raised fists. Some wore black veils. Holding placards, they chanted and repeatedly stopped the parade for a few seconds at a time. Some lining the route cheered.

One of their signs read: "May we never again have to shut it down."

The group issued a statement saying that its protest last year, which resulted in a controversial ban on uniformed police in this year's parade, had made Pride more "inclusive." The group also took credit for a funding increase "for artists and black youth."

BLM Toronto co-founder Rodney Diverlus said the appearance was meant to refocus the "narrative" on the issues the group aims to confront.

"Now the fixation is whether or not we're registering, the fixation is where the police are at," he told local cable news channel CP24. " ... Anti-blackness still exists. The demands that we were bringing forward were actually just the beginning of a conversation."

Their actions last year set off a political controversy that divided the LGBTQ community and saw some city councillors launch a failed move to try to pull the city's funding for the event unless uniformed police were included.

A contingent of Toronto police officers was invited to march in uniform in the New York City Pride parade, which was also on Sunday. But even there, local Black Lives Matter activists issued demands that New York police be barred from future parades.

In Toronto, pro-police gay activists were prompted to launch an alternative Pride event in a downtown park, inviting police and other "first responders," although Police Chief Mark Saunders had banned officers from attending in uniform. An hour after it had begun at noon, only a handful of people had shown up.

Attending Toronto's Pride for the second time, Prime Minster Justin Trudeau marched at the front with his wife Sophie Gregoire Trudeau and their children. He was greeted with cheers and flanked by Ontario Premier Kathleen Wynne, Toronto Mayor John Tory and Assembly of First Nations National Chief Perry Bellegarde. Indigenous artist Kent Monkman was the grand marshal and First Nations dancers in ceremonial dress featured prominently at the front of the parade.

Just before the march, Mr. Tory told reporters he was confident that talks between Pride organizers and the police chief would see the police back in the parade next year: "I've certainly made it clear that I want to see it resolved ... I am optimistic."

In an interview, Pride executive director Olivia Nuamah said Pride needed to consult with community members about what police reforms are needed before officers can be included again. She also said she did not see any evidence the fight over excluding police had affected attendance.

Having Mr. Trudeau attend for a second year in a row was a show of support, she said: "Especially given the year we've had. He could have easily walked away, but he didn't."

"I probably wear a uniform that represents the group that has done the most damage to the LGBT community, the Christian church," Rev. Hawkes said. "So I would say, don't ban what's offensive to some, reform it to the benefit of everyone." 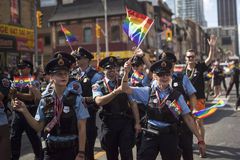 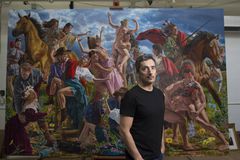 Black Lives Matter activists hold alternate Pride march in Vancouver
June 25, 2017
Follow Jeff Gray on Twitter @jeffreybgray
Report an error Editorial code of conduct
Due to technical reasons, we have temporarily removed commenting from our articles. We hope to have this fixed soon. Thank you for your patience. If you are looking to give feedback on our new site, please send it along to feedback@globeandmail.com. If you want to write a letter to the editor, please forward to letters@globeandmail.com.
Comments