Brampton residents who have been waiting for Mayor Susan Fennell and other members of council to be punished for misspending more than $200,000 of taxpayers' money will have to keep waiting.

At a meeting on Wednesday afternoon, the municipal council decided to turn repayment of the misspent funds Deloitte Canada identified in a forensic audit in August over to a dispute resolution process rather than sorting out the matter in council as was planned.

The amounts Ms. Fennell and other councillors are being asked to pay back will be posted on the city's website by Sept. 26, said Brampton's chief administrative officer, John Corbett. The dispute resolution process will allow council to challenge the amounts the third-party auditor identified.

The decision enraged residents, some of whom had been waiting in council chambers for an hour and a half to see what punishment would be meted out to their elected leaders.

"Why is the report not being discussed?" Devinder Sangha, a mayoral candidate, asked during public question period.

"It's very sad. It's a double standard. If I'm an ordinary citizen and pick up a suit at a store and try to walk out, I will be charged with a crime."

Deloitte Canada was hired by the city to investigate spending by the mayor and councillors and released a report in August that identified $172,608 worth of expenses Ms. Fennell had filed that were in breach of city policy. Auditors said an additional $149,955 worth of expenses may have also been in breach, but they could not find enough documentation to make that ruling. Councillors also breached policy; the total of all their inappropriate spending was $46,000.

Mr. Sangha and another deputant questioned why any other processes were needed when Deloitte had been hired for the express purpose of identifying inappropriate spending.

Mr. Corbett explained that it was like making a transaction at a store: You are given your bill and you have the right to question what is on it.

In a release after the meeting, Ms. Fennell said: "My position all along has been that the audit report is incorrect. Today's unanimous council decision, to adopt a dispute resolution, finally restores fairness to the audit process and its findings."

But that's not how Councillor Elaine Moore, one of Ms. Fennell's most vocal critics, sees it. She blamed Ms. Fennell for dragging out this issue by adding the dispute resolution process to it. Earlier this month, Ms. Fennell threatened to sue Deloitte Canada for "exceeding its mandate" in its investigation of her.

"If the mayor wouldn't have threatened legal action against them, we'd be able to ask questions, seek clarification," Ms. Moore said.

Members of the public were also irritated that discussion of a report about council misspending that had been prepared by Robert Swayze, the city's integrity commissioner, had been removed from the meeting agenda. Ms. Fennell has also threatened to take legal action against him.

Mr. Swayze conducted his own investigation after the release of the Deloitte audit and, in a report released in early September, came down hard on the mayor for purchasing thousands of dollars worth of flight passes for travel when economy tickets are standard for politicians.

Ms. Fennell said she had received staff approval to buy the passes, but Mr. Swayze was unable to find any documentation that supported that claim. A punishment for the mayor in response to that report was also to be dealt with at Wednesday's meeting, but council voted to put the matter aside until the payback has been sorted out. The maximum penalty for Ms. Fennell is 90 days' loss of pay.

Ms. Moore said she hopes another special meeting of council will be called in the coming weeks so that it can go through dispute resolution and discuss Mr. Swayze's report before the Oct. 27 municipal election.

Repayment was to be discussed two weeks earlier in council, but Ms. Fennell threatened to take legal action against fellow councillors, The Toronto Star, the integrity commissioner and Deloitte just minutes before the start of that meeting. At the time, Mr. Corbett recommended that they hold off on discussing the issue until another meeting, giving parties involved a chance to seek legal advice. Last week, Ms. Fennell served the Star with a libel notice.

Ms. Moore said the spending scandal has dominated conversations she has had with residents in her ward. "There is a heightened frustration around this. I'm hearing two things: 'Why is she the highest paid mayor?' and 'Is she going to be paying back all the money?'"

Spending scandal hot issue as Brampton mayoral candidates square off at debate
May 12, 2018 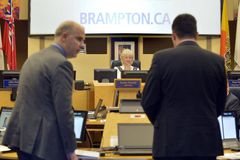 Brampton’s spending scandal: How accountability fell by the wayside
May 12, 2018

Audit of Brampton mayor’s spending sent to Peel police
May 12, 2018 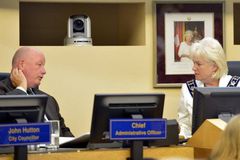