Hockey purists and heritage mavens were outraged when a plan emerged to put a supermarket in that cathedral of the puck, Maple Leaf Gardens. How wrong they were. The stunning new Loblaws brings life to the old hulk and an new urban buzz to its downtown neighbourhood.

People lined up down the block all Wednesday morning to get a first look at the new megastore and all its wonders, from an 18-foot tall Wall of Cheese and an artisan bakery to a sushi bar and a tea emporium. It was an instant happening. By 1 p.m., staff said around 15,000 people had passed through the doors.

It may seem silly to get so worked up about a supermarket, but Loblaws has created a brilliant new urban space out of the dank confines of the Gardens. The yellow-brick facade recognizable across the country has been retained, along with the classic white marquee on Carlton. Inside, 20-foot ceilings and burnt-orange floors give the store the atmosphere of a colourful market. In the seafood corner, 12-foot-high letters in black and white tile spell out "fishmonger." At the checkout, a giant mural gathers images of downtown landmarks from City Hall to the CN Tower.

To honour the history of the Gardens, a sculpture made of welded stadium seats is affixed to one wall. In the middle of the store, a simple red dot marks the spot where centre ice used to be when, in the Year 212 BC, the Leafs last won the Stanley Cup. Images of famous figures who once appeared in the Gardens, from Elvis Presley to Wayne Gretzky to Communist leader Tim Buck, hang in the aisle.

Hockey fans should not grieve too much. Above the supermarket, under the arena's vaulting roof, Ryerson University is building a new rink. Within months, the sound of caroming pucks will be heard again in the Gardens, which stood empty for a dozen years.

It is more than just its success as a building that makes the revived Gardens so exciting. It is what it stands for.

Tens of thousands of people are coming to live in the condominiums springing up around central Toronto. By creating its first truly urban supermarket – another is to open at Queen and Portland on Friday – Loblaw is making a pitch for their business and hopping aboard the city-living bandwagon. Accessible by transit and on foot, rather than just by car, a magnet store like this can only enhance the appeal of downtown living.

It should do wonders for the rather shabby stretch of Carlton east of Yonge. It should also puncture the myth that big-box retail is never appropriate downtown. If a Loblaws can work, why not Wal-Mart or Home Depot? Why make people who live downtown drive to a mall on the outskirts? A Canadian Tire already exists happily right at Dundas and Bay – topped, like the Gardens Loblaws, by an educational institution: Ryerson's Ted Rogers School of Management.

What happened at the Gardens is city building at its best. It brought together a university president, Ryerson's Sheldon Levy, who wants to link his institution to the vitality of the city; a grocery magnate, Galen G. Weston, who saw a chance to do something exciting at an historic building in the heart of Toronto; and a federal government that saw a chance to spend infrastructure money on something more glamorous than sewer pipes.

Here was example of public and private sectors coming together to do something great. Loblaw wins, with a store that is a landmark within a landmark. Ryerson wins, with a badly needed new arena and athletic centre in a building that resonates with history. Above all, Toronto wins, with a great project that adds to the growing hum of city life.

new
Toronto's Maple Leaf Gardens gets a makeover - and a new name
November 29, 2011 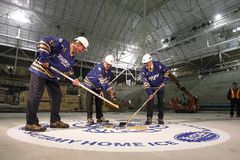 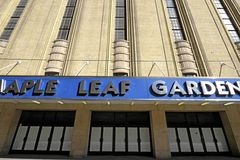