Toronto city hall is pressing a prominent developer to put up a taller building.

Mayor John Tory is telling Big City Condo Corp. that the condominium it has planned for the downtown corner of Maple and Oak streets is simply too small. The proposal calls for a 25-storey residential tower. Mr. Tory said it could easily rise to 40 or even 50 storeys.

He dismissed complaints from locals who said the tower would overshadow the neighbourhood and put too many more cars on the street. The intersection is well served by public transit, with two lines crossing there. The mayor called it a golden opportunity to create urban density.

He insisted the city must build up instead of out if it wants to avoid more sprawl. "We love tall buildings," he said. "We need more of them. We can't keep spreading out and out and out. We need to grow up, and I mean that quite literally."

In case the pithy quotations from the mayor didn't give it away, the above is not real. Such a news story never appeared and is not likely to appear – and that's an awful shame.

Toronto is welcoming throngs of new residents from across the country and around the world. Fake John Tory is right: Putting them all in suburban subdivisions that stretch to the horizon is a bad idea. It means gobbling up more valuable land and putting more belching cars on snarled roads. Far better to build dense, walkable communities that are easier on the environment. That means taking maximum advantage of available plots of land. And that in turn means putting up lots more tall buildings.

Yet every time a developer proposes one, a big fight breaks out. Neighbours shout "not in my backyard." City councillors wary of losing votes join the chorus. The developer cuts the height of its tower to appease the mob. The whole thrust is to whittle away at building projects – scaling back, cutting down, reducing ambition and scale.

It is a tiresome ritual that happens just about weekly in Toronto.

It happens in places such as Yonge and Eglinton, where the city's own official plan calls for building density. It happens at major intersections, right on subway lines, that are natural places to build density. It even happens in dense high-rise projects, such as CityPlace down by the lake, where plans for some big new towers were scaled down a few storeys even though most of the neighbours already live in tall buildings. The result is that the city is squandering some of its best chances to promote what the planners call intensification.

Toronto needs to get out of its defensive crouch and start promoting urban intensity with real vigour. Rather than forcing developers to scale back, city hall should be encouraging them to scale up. If the real mayor had the conviction of the fake one, he would be leaning on developers to build taller and bigger, especially on key sites.

You want to build at a major intersection next to a subway stop? Okay, how many people do you expect to live and work there? Only that many? Try harder. Let's see if we can make that site denser.

City leaders thinking 50 or 100 years ahead rather than fretting about the next election would bring in incentives that reward instead of punish builders who reach for the sky. They would levy taxes on sprawl and give breaks for height and density. They would encourage authorities to close underpopulated schools and open up the land for development. They would make it much easier to build on main avenues, many of which are still lined with decades-old two-storey buildings.

They would make it far easier and more attractive to build around transit stations, too. It is one of Toronto's most glaring failures that long stretches of the Bloor-Danforth subway line remain low-rise and low-density on the surface a full half a century after the line opened.

Sadly, there is little sign of any such reversal of attitudes. Though parts of Toronto are getting lots of tall buildings and plenty of density, it is often over the objection of city officials.

Real John Tory added his voice to the complaints of parents at a North Toronto school that is getting a tall building next door, a perfectly harmless rental project in a key development node. He prefers to talk about adding "gentle density" to city streets. Fair enough, but building a better city will mean some more tall buildings, too. Why can't city leaders acknowledge that instead of hopping on every NIMBY bandwagon?

No local politician has been willing to stand up and make a robust case for height and density in this booming metropolis. Just once, it would be nice to see someone say to a developer: Your building is too short. Taller, please.

A tall building next to a Toronto public school? Oh, the humanity
May 24, 2017
Toronto’s young people are starting to interrupt the not-in-my-backyard chorus
April 21, 2017
Toronto’s CityPlace forms a community in a high-rise jungle
July 28, 2017 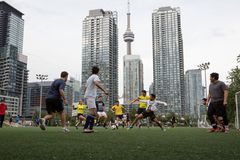