A Wal-Mart? In downtown Toronto? Near the bohemian wonder that is Kensington Market? The very idea has many local residents in a rage.

In just five days, more than 72,000 people have signed a petition against a proposal to build a three-storey, 130,000-square-foot retail complex topped by a Wal-Mart on Bathurst Street south of College. "Everything I love about my neighbourhood is threatened by this proposal: the human scale of the streetscape, the skyline, its walkability, the local independent businesses that give Kensington Market and Little Italy their character," reads the petition.

At a community meeting on Thursday evening, the representatives of the developer, RioCan, got a roasting from residents, who jeered when they dared to suggest the mall would provide more shopping opportunities without hurting Kensington's historic character.

One protester said that the community didn't want anything to do with Wal-Mart and its "absolutely vile – vile – anti-human, anti-labour practices." Another said that Toronto "isn't a dumping ground for corporations to build up what they want without any respect to what our character is."

Councillor Adam Vaughan said that "multinational, big-box retail is the antithesis of a walkable neighbourhood." To whoops and cheers from the overflow crowd, he said the development could do "irreparable harm to some of the most precious, prestigious, fabulous, wonderful neighbourhoods on the continent."

But hang on a bit. Before the villagers get out the pitchforks and torches, let's remember the proposed mall isn't actually in Kensington Market. It's four or five blocks to the west. There is nothing to suggest that it would suck the life out of the market, whose produce vendors, butchers, spice merchants, fishmongers and vintage-clothing stores draw shoppers from all over the city.

On a bike ride through the teeming quarter on Friday morning, I passed a tattoo parlour, a specialty cheese shop, several places selling Latin American foods, a store selling stuff from Tibet, a hat vendor and numerous independent cafés, restaurants and taco joints. None would seem to face much of a threat from Wal-Mart, which offers mass-produced general consumer goods and an entirely different shopping experience. If Wal-Mart moved in, locals might go there for underwear, toilet paper and milk, but still head to Kensington for their coffee beans and fresh fruit.

Far from wrecking the neighbourhood, the new complex could improve it. The stretch of Bathurst where it would go is a bit of a dead zone, with rundown houses on one side and old commercial buildings on the other. The mall would replace an auto body shop, an electrical-supply company and the former Kromer Radio. Parking would go underground and ground-level stores below the Wal-Mart would face the sidewalk, enlivening, not deadening, the streetscape.

It is wrong to think of big-box retail as an alien, suburban form necessarily destructive to the denser fabric of downtown life. The old Eaton's and Simpsons stores in the heart of the city were the big-box stores of their day. There has been a Wal-Mart in the Dufferin Mall for years. Neighbouring shopping streets such as Bloor, College and Dundas continue to thrive.

Big-box retailers keen to get in on the trend to downtown living are adapting to the urban environment. Target and Office Depot are opening smaller outlets in the centre of some U.S. cities. Loblaws recently opened supermarkets at Carlton and Church and Queen and Portland. Despite the fears of neighbouring merchants, neither has proved to be a retail death star. Instead, they have added to the growing hum of urban life in those neighbourhoods.

As hard as it may be for the Save Kensington group to admit, quite a few people actual enjoy the low prices and big selection at Wal-Mart. If the one on Bathurst goes ahead, they will be able to reach it on foot or take one of the two streetcar lines that go by it. That wouldn't be the end of urban life as we know it, and it certainly wouldn't be the death of Kensington Market. 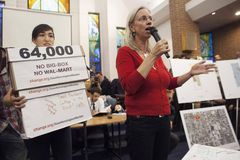 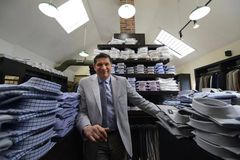