In the 1.8-metre-wide battlefield that is a Toronto bike lane, new combatants have, of late, appeared. But the brand-new Sherbourne Street bike lanes, which are separated from traffic by a strip of concrete, will soon throw into fresh relief the issue of who may safely use them. It's a question that has been growing steadily more pressing in the past three years: Should people riding the new breed of electric scooters and power-assisted bikes use the cycling lanes that, according to the city's bylaw, are reserved for muscle-powered vehicles?

Many cyclists resent the presence of these increasingly popular two-wheelers, saying their weight and speed – not to mention their silence – brings an element of physical risk into lanes intended to provide cyclists with a buffer against fast-moving cars and trucks. Electric-bike owners, in turn, say their sleek vehicles represent a clean, low-energy alternative to cars, and also allow older people who can no longer manage conventional bikes to continue to move around the city on two wheels.

Ontario legally recognized these vehicles in 2009 but left it up to individual municipalities to regulate their use, says Lock Hughes, an accountant who speaks for the Toronto Electric Riders Association. The City of Toronto's bylaw technically prevents electric scooter users from travelling in the bike lanes when they're using the motor. Anything not powered by a motor may use the bike lanes, so that includes skateboards, long boards, in-line skates. People in electric wheelchairs are allowed to use the sidewalk, although they are occasionally seen in bike lanes.

But, Mr. Hughes says, Toronto police don't enforce the rule. "Nobody really cares except for the cyclists who are wrapped up in a dogma."

(The police ticket motorized vehicles that enter bike lanes, but they don't keep statistics on how many infractions are issued to electric scooter users.)

The separated bike lanes on Sherbourne, seen as a prototype for the cycling infrastructure that could eventually spread to other city streets, will bring these tensions to a head because the raised curb that keeps cars out will also prevent e-scooter users from ducking in and out of the lane as they pass slower bikes.

"If you watch them, they'll get out of the bike lane and move back in," says Dan Egan, the City of Toronto's manager of cycling infrastructure, who points out that the electric vehicles tend to travel at about 30 kilometres an hour whereas most bikes go at about 20 km/hr.

"It's going to be pretty tough for e-bikes and cyclists to operate in [the Sherbourne] bike lane."

The e-scooter phenomenon has been slow in coming to Toronto, but dealers and riders say the market is now growing rapidly.

There is certainly no love lost between the two camps. "As we build more segregated bike lanes, we'll see more conflict between bikes and e-bikes," predicts Jared Kolb, spokesperson for Cycle Toronto, a cyclists' advocacy group. "I think enforcement is going to be the real issue. There will have to be an awareness raising across the city so we can address that problem."

Ben Marans, a Toronto Atmospheric Fund manager who cycles to work every day, says he's pleased to see the emergence of a clean transportation technology because this trend reduces car traffic. But he remains concerned about safety issues in the narrow confines of the formal bike lane. "You don't hear them because they're wonderfully silent," he says. "They come up on you and these are pretty big bulky machines."

Mr. Hughes, for his part, insists that the e-bikes and scooters come with mandatory lights and horns, and some are no heavier than the bulky cargo bikes that have also appeared on city streets in recent years. He also predicts that the growing ranks of electric scooter users will soon make their voices heard at City Hall by calling for more separated bike lanes, as well as changes to the bylaw. "You haven't heard from the power-assisted people, but that's coming up," he predicts. 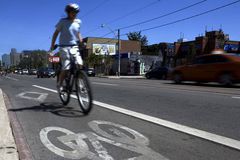 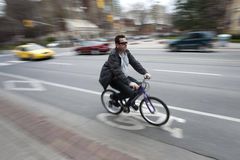 Opinion
Separated bike lanes are the way to go
July 22, 2012 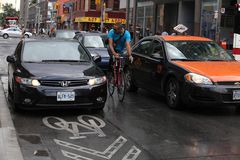 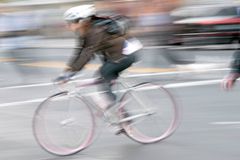