Toronto city council has voted overwhelmingly to retain temporary bicycle lanes on Bloor Street, drawing a line under a debate that dates back to the 1970s, when activists started pushing to have a safe space for cyclists along the key downtown road.

The 36-6 decision on Tuesday means that the ad hoc barriers keeping cyclists and drivers apart will stay, and ultimately be replaced with more permanent infrastructure. Supporters said it also represents a sea change in how cycling is viewed at city hall.

"The tipping point that I think today's vote indicated is that the debate is no longer 'do we build a bike lane or not,' the debate is 'how do you build the best possible bike lane,'" said Councillor Joe Cressy, whose ward includes some of the lanes.

Polls showed that keeping the 2.4 kilometres of bike lanes – from Avenue Road to Shaw Street – was backed by people across the city. The temporary lanes quickly proved popular after being installed in 2015, attracting about 5,000 cyclists a day. Opponents argued, though, that the lanes slowed automobile traffic too much. And a minority of local businesses questioned the economic-impact data gathered by the city, saying they didn't show the whole picture.

The council decision came only after a pilot project lasting more than a year that produced a wealth of data, raising questions about how long it will take the city to pursue further bicycle infrastructure.

"I hope we can do it in a more expeditious manner, but carefully and responsibly," said Mayor John Tory, who voted in favour of keeping the lanes. "It took time. I think we've learned lessons that will allow us to do it faster and better the next time."

Toronto's halting progress toward a safe network for cyclists stands in stark contrast to some other major cities in Canada.

Edmonton installed 7.1 kilometres of bicycle lanes – nearly three times the distance approved in Toronto on Tuesday – in less than a year. In Montreal, which already has much more protected bicycle infrastructure than Toronto, the incoming mayor has pledged a large increase.

In contrast, Toronto has limited hard infrastructure to show for the cycling plans of the past few decades. The biggest recent additions to the network were the lanes on Sherbourne, replacing ones torn out on Jarvis, and those along Adelaide and Richmond, which remain a pilot project despite being installed several years ago.

"I think changing the status quo is always a challenge, and our streets as they're built today were built for automobiles, and so retrofitting them for another mode, be they an LRT or a bike lane, becomes highly contested," said Jared Kolb, executive director of the advocacy group Cycle Toronto.

Mr. Kolb also noted the reality in amalgamated Toronto that a councillor from the inner suburbs has the same vote as one through whose ward a bicycle lane might run. And one councillor, Etobicoke's Stephen Holyday, warned that turning more road space over to cyclists risked angering his constituents.

"As we sever off east-west routes in and out of the city, it becomes more and more difficult for people in the west to remain connected to their downtown," he said. "They feel isolated, they don't feel like they're part of the city any more. I think we need to include them." 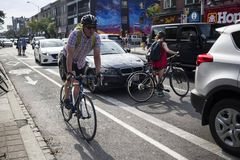 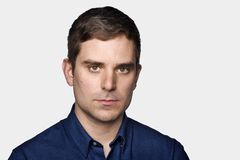