Don't tell Rob Ford, but the City of Toronto is spending $223,500 to fix up the front doors of City Hall. That's not including HST. Before someone tries to make this another example of a runaway gravy train, consider the beauty and history of these remarkable objects.

The massive, teak-faced doors are part of Finnish architect Viljo Revell's design for City Hall, Toronto's most striking and famous building. They were installed in time for its opening on Sept. 13, 1965.

Their big curved handles, made of laminated wood and plastic, echo the curved shape and distinctive ribbing of the building's double curved towers. The warmth of the wood sets off the Nordic austerity of Nathan Phillips Square outside and the grey and white of the stone floors in the rotunda inside. The doors are arranged in two rows, inner and outer, and there are 28 of them in all.

Hundreds of people pass through them every day on their way to work for the city, watch city council, get married or obtain a parking permit. You can feel the heft of them as you pull those handles and enter the city's democratic hub.

Over half a century of constant use and exposure to the elements – they face the south and the slanting sun – the doors sustained a lot of wear and tear. They were gouged and dirty. At some point, workers had sanded and stained two door leafs, so they didn't match the rest.

About half of the hardware used to open and lock them had been replaced over time, sometimes by second-rate material. The worn and faulty fixtures had made some of them hard to open and people were starting to complain.

So over the past few months, staff have been taking the doors down in sets, trucking them to a wood-working shop in Mississauga and bringing them back to be rehung. The city took great care to get this right. It hired a conservation architect, a wood conservator and a hardware consultant. They X-rayed the doors to see what was inside. They sent samples of the wood to the Canadian Conservation Institute for surface analysis. The objective was to restore the doors without making them look jarringly new.

"Minimal intervention is the rule of conservation," said city heritage expert Guy Zimmerman, admiring the doors from the square. "You don't do more than you have to do to something. The character that we acquire as time goes on gives us a kind of dignity."

Conservators decided to clean the nine-millimetre veneer of the doors with odourless mineral oil, lightly scuff parts of it with fine, 400-grit sandpaper and then coat it with polymerized tung oil. The project is nearly done and the new doors look great.

Mr. Revell would have been pleased. City councillor Adam Vaughan says that when the architect's daughter took a tour around the building with him some years ago, she broke into tears when she saw the doors. She told him that her father had set out to become a boat builder before training as an architect and loved to work in wood. He died before the building opened. "This, to her, was her father," said Mr. Vaughan.

Like the doors, Mr. Revell's masterpiece has suffered over the years from lack of care. "This building should be the highwater mark of building maintenance in this city and it's not," said Mr. Vaughan. "I've seen high schools with greater attention to detail."

Now, the square is in the midst of an ambitious renovation. The city should pay equal care to the building itself. The restoration of its magnificent doors is a fitting start.

The ‘worst thing for democracy,’ according to the Ford brothers
August 27, 2013 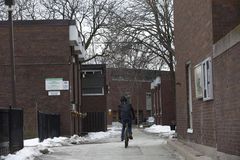