Forceful, mannered and aloof, "Fort Book" is a love-it-or-hate-it proposition. Ron Thom called it a "dictionary of architectural miseries," and many locals continue to dislike it, but in its fifth decade it has acquired a fan base among younger architects and aficionados.

Its boldness was no accident. In the building craze leading up to Canada's 1967 centennial, the University of Toronto under president Claude Bissell set out to build a badly needed new library – and to do so in a dramatic way. Four blocks of houses were cleared with eminent domain to establish a site. Then, Mr. Bissell chose the boldest of five schemes by New York library specialists WBTL, for a 14-storey tower of stacks and reading rooms and two smaller appendages. The seven-storey Bissell Building houses the Library and Information Science Department, and the six-storey wing holds the Thomas Fisher Rare Book Library. (The latter's central atrium is one of the best modernist spaces in the city.) These buildings share a geometry of equilateral triangles, from details of ceiling slabs right up to the shape of the buildings themselves, and a peculiar material and formal palette: precast and poured-in-place in various textures, accented with West African mahogany and lit through castle-like slot windows. In a 2011 renovation, Diamond Schmitt took an appropriately gutsy response to the building, with new millwork of a grainy beech. Their new west addition, largely for study space, will be glassy, but might just have enough personality to stand proudly by its brutalist neighbour.

A fascinating assemblage. First, Zeidler's 1990s ersatz loft, sliced up by deconstructivist zinc shrapnel; then KPMB's made-to-measure black boxes wrapping a Victorian house. The ensemble works, and the atria of the new and old wings connect. But most of the finesse is found in the KPMB wing. It crams 150,000 square feet of floor space onto, above and below a tight site – while keeping the ground level transparent and finely integrated with the rest of the block. (The broad, shallow central stair, with its hot-pink accents, and the fifth-floor terrace are some of the highlights of the interior.) That wing won a Governor-General's Medal in 2014. 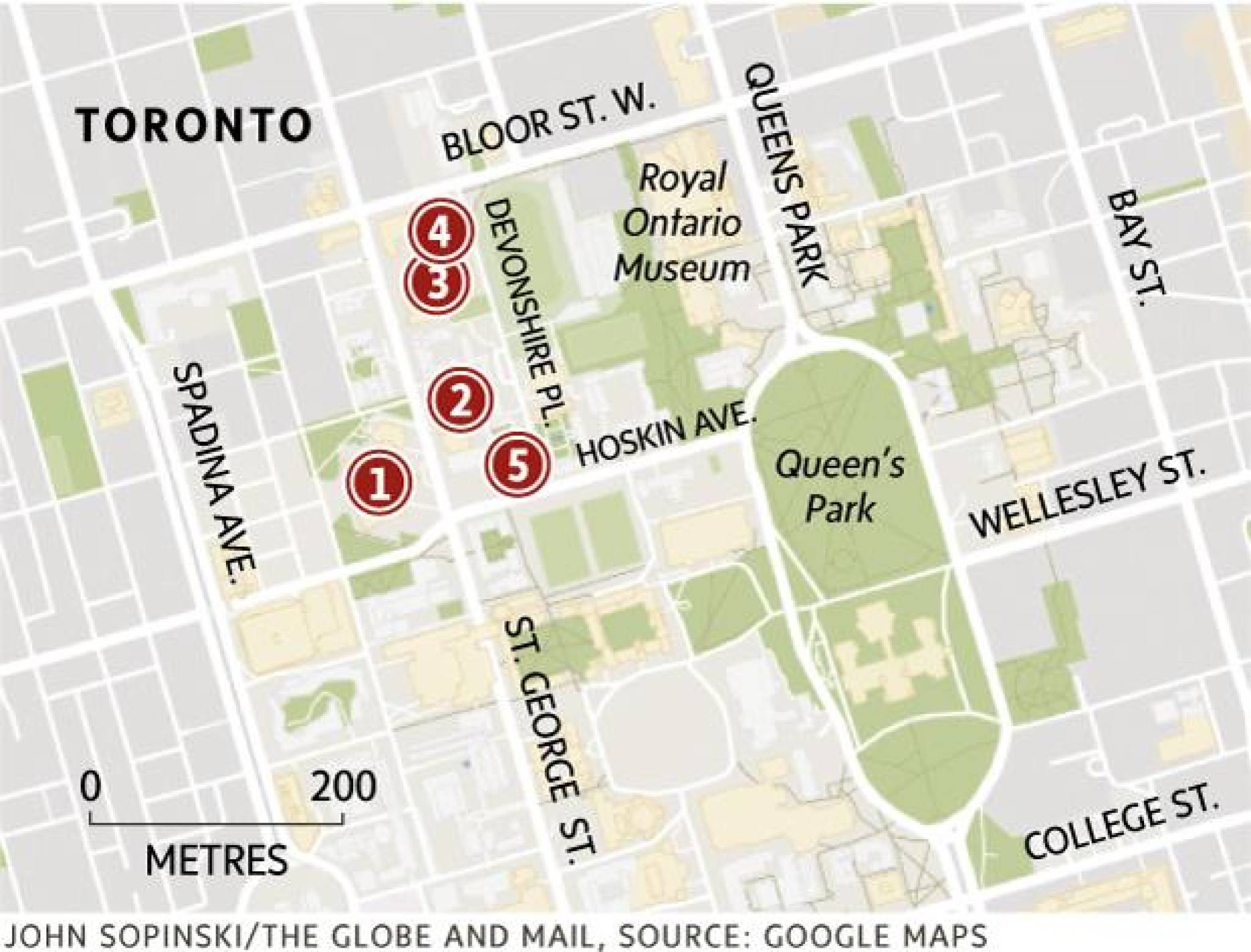 One of the great Toronto buildings of the 20th century: an act of infill that ennobles older buildings with new construction that's finely detailed and built to last. It was started by Myers and completed by his former associates, led in this case by Thomas Payne and including Siamak Hariri. They began with a grand Annex-style house, and a drill hall and officers' quarters built for the Canadian military's officer-training program. The architects integrated them into one complex, which extended across the backyards of two houses to the north, forming a quadrangle. (These houses, completed in 1888 by Langley & Burke and 1899 by Burke & Horwood, are not actually part of the college.)

The outer façades of the college are clad in red brick and ashlar granite, while doors and windows are of mahogany and glass – an idiom borrowed from Louis Kahn that would become central for KPMB and other high-design Toronto practices, including Hariri Pontarini. The rich interior employs limestone, Quebec granite, brick and teak – solid materials unlikely to go out of fashion. What makes the place remarkable, though, is the artful linking of indoor and outdoor spaces, old and new architecture, found façades and artfully wrought interventions.

Most people consider architectural design in its horizontal dimension; think of a floor plan, which resembles a map. But architects also think in section – imagine a vertical slice through a building, which reveals the arrangement of spaces above and below each other. This masterful piece of design by the great Vancouver architects the Patkaus and local luminaries MJMA works its magic in this "sectional" dimension. The Kimel Family Field House, a competition space with seating for 2,000, is stashed below ground. The Strength and Conditioning Centre is raised above, supported by dramatic steel trusses that display their strength through street-front windows. Meanwhile, a glassy ground floor with a pedestrian through-street knits together the block.

Arguably the greatest Toronto building of the 20th century. It began with a medieval model, as a small residential college for male graduate students. This was proposed and funded by the Massey Foundation. Along with Vincent Massey, the foundation included his son Hart and his nephew Geoffrey, both architects and the latter an early partner of Arthur Erickson.

A private design competition brought together Erickson and Ron Thom from the West Coast and Carmen Corneil and John C. Parkin from Toronto. Three of the four responded with straightforwardly modernist schemes. But Mr. Thom, then little known outside Vancouver, had a different response, and he won. The plan was inward-looking, the main cladding was Ohio brick and there were elements – such as the finials atop the south wing – that were clearly ornamental. All of these elements were criticized as regressive. Yet, as critics have observed, the massing and forms recall Dutch de Stijl modernism, while many aspects of the building owe a debt to Frank Lloyd Wright. It was, and remains, gorgeous: The low, multilevelled Junior Common Room and the dining room, Ondaatje Hall, are among Toronto's finest rooms. Mr. Thom's manipulation of light and space and fusion of gothic grammar with a very personal modernism create the qualities the Masseys asked for: "dignity, grace, beauty and warmth."