In a shot aimed at Toronto's building industry and Queen's Park, Clarington town council voted unanimously Monday night to ban the dumping of all clean fill from commercial developers operating outside the Durham municipality's borders.

Meanwhile, west of the GTA, New Tecumseth town council, responding to complaints from a local seniors' community, voted earlier this week to issue a stop work order against a very busy clean fill operation at a private airstrip on Highway 9 near Tottenham, where Coneco Environmental has been dumping in thousands of truckloads of dirt from the Spadina subway extension project. (Council has also asked for help from federal and provincial officials to enforce the action.)

Both decisions raise the stakes in an increasingly tense battle pitting some rural 905 residents and environmental groups against waste disposal firms that are dumping thousands of tonnes of excavated, and occasionally contaminated, soil at abandoned quarries, former airstrips and private lots. (There's been no suggestion of contamination at the Coneco site.)

"We run into some real challenges with the quality of the fill," said Clarington mayor Adrian Foster, adding that other 905 municipalities have been struggling to deal with the recent surge of dumping activity related to Toronto's building boom.

Development lawyer Ron Kanter, who attended the meeting on behalf of a Scugog builder, described the move as "understandable but regrettable" and warned the ban could trigger a chain reaction elsewhere in the 905. "If other municipalities prohibit fill from the Toronto area, I think it will have an impact on residential condominiums and infrastructure projects in Toronto and other places in the GTA."

The Clarington vote "raises the question about what would happen if every municipality passed a similar resolution," said Tara Roy-DiClemente, a councillor in the Town of East Gwillimbury, which has also grappled with the question of whether to ban clean-fill dumping.

Mr. Foster and Ms. Roy-DiClemente both called on Ontario's environment ministry to establish provincewide rules because smaller rural municipalities don't have the resources to properly regulate dumping, and the associated risk of ground water contamination if the soil is laced with solvents or hydrocarbons. "Truthfully, there has to be one set of rules," said Mr. Foster.

In an e-mail, environment ministry spokesperson Kate Jordan said Clarington "has the authority to restrict dumping of clean fill that doesn't originate from the municipality." But she added that ministry officials are working with municipalities and conservation authorities to promote "best practices."

While the focus in Clarington has been on fill from commercial projects, and especially those going up on former downtown industrial lands, very large volumes of excavated fill have been flowing out of major infrastructure projects, such as the Spadina subway extension and the early phases of the Eglinton LRT tunnel.

In the case of the New Tecumseth site, a group of seniors launched a bid to press local officials to step in and halt the surge of trucks depositing soil at the Volk Airport, ostensibly to rebuild one of the runways. Coneco also owns the airfield.

In a emotional presentation to a packed council chamber on Monday night, David Francis, representing 300 seniors living at Tecumseth Pines, said his community in recent months has experienced incessant truck noise and dust, and have also noticed that one of three local wells has gone dry.

Ralph Palmisano, who owns Coneco, said his firm won a contract two years ago from the TTC to bring in 20,000 truckloads from the subway excavation. He insisted his company hasn't breached any regulations, and recently showed officials from the environment ministry around the site. "We've got everything under control," he said. 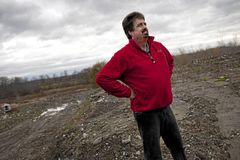 Tunnel plan for Eglinton Crosstown LRT could stymie Ford
May 8, 2018 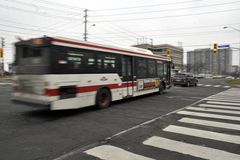