Canada's most high-profile organization supporting people with vision loss is turning to technology in a bid to create what it calls the country's most accessible neighbourhood.

The CNIB – formerly known as the Canadian National Institute for the Blind – says it's hoping to transform a small stretch of one of Toronto's busiest streets into an area that blind or low-vision people can not only navigate easily, but fully engage with independently.

The organization has partnered with the Rick Hansen Foundation to acquire beacons that will help blind people locate local businesses on the street, then find their way around inside with confidence.

The foundation has funded the purchase of 205 of the roughly 14-centimetre beacons that stores and restaurants in the test area can acquire for free and program to convey detailed information about the layout of their physical space to a blind person's mobile phone.

Blind users hail the project as a major innovation, while the CNIB says it's hoping the initiative convinces businesses that increasing accessibility makes good fiscal sense.

Inclusive design experts also praise the project, but advise that true accessibility involves designing for a range of abilities and that more needs to be done if the area is to truly live up to the goal of being the "most accessible" neighbourhood.

The project's rollout is gradual, with the CNIB persuading businesses in the quarter-kilometre testing range to get on board.

As beacons slowly begin to proliferate the stretch of Toronto's Yonge St. between St. Clair Ave. and Heath St., at least one blind user said the difference is already apparent.

Mark DeMontis said the information available to him through the beacons gives him a sense of independence he hasn't experienced since losing his vision 13 years ago.

By opening a GPS app called BlindSquare on his iPhone and listening to the information relayed by the beacons, DeMontis said he's able to easily identify business entrances on the sidewalk, then find his way to various features once he gets inside.

The beacons can be customized to the space they're occupying, he said. For instance, a restaurant may choose to communicate the location of tables, washrooms and staircases, while stores may be more interested in making sure visually impaired customers can quickly locate cash registers, retail displays or change rooms.

Walking into a business making proper use of the beacons, he said, is a liberating experience.

"I went so many years with a sense of frustration because I tried to do things that I used to do really independently on my own," DeMontis said in a telephone interview. "Because now I have the tools, and I have the knowledge and the information how to do this successfully ... it's a great sense that I'm regaining independence."

The project is meant to not only increase accessibility for the visually impaired, but also to send a broader message to corporations and governments alike.

Angela Bonfanti, the CNIB's Executive Director for the Greater Toronto Area, said many businesses are under the erroneous impression that making their premises more accessible is an expensive and arduous undertaking.

She challenged that notion, saying the rewards for embracing an underserved market would more than make up for the relatively low expense of making a space more accessible.

Having more businesses take the lead, she argued, could hopefully push governments to follow suit.

"If we can show that an entire neighbourhood can get together and work together to show what accessibility looks like, then you really have some great research," she said. "And we'll go to our local governments and say, 'the legislatures, the chambers, the museums, you name it, you need to do this. You need a beacon in every publicly funded building, because we're taxpayers too."' Praise for the project came from at least one industry expert, who nonetheless urged companies not to lose sight of the fact that true accessibility involves catering to a wide spectrum of needs beyond vision loss.

Thea Kurdi, universal design specialist with accessibility consultants DesignAble, called the CNIB's project exciting and innovative, adding most conversations about building design tend to focus on wheelchair users rather than other disabled demographics.

But Kurdi said true inclusivity involves designing for users ranging in age from five to 95 whose needs and abilities will vary greatly over their lifetimes.

She said technology can be a valuable tool in an inclusive design project, but said it should not be viewed as the entire solution.

"The hope has been that technology is going to fill the gap. And I warn people about that," she said. "If you said to a person with vision loss, 'your phone is going to take care of it, you're going to bring the solution with you,' that does allow the user to pick the right solution for themselves, but it's also kind of akin to telling a person who uses a mobility assistive device,' you bring your own ramp."' Kurdi said even simple tweaks to interior spaces can improve accessibility for all. Laying carpeting or making other acoustic tweaks can simplify life for the hard-of-hearing, using higher contrast paints or railings to delineate spaces can help people with low vision, and switching door hardware from knobs to levers can make a difference for people with physical disabilities. 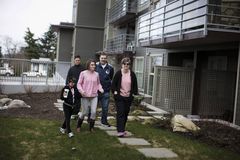