There was no single group that spearheaded this week’s critical mass of sex ed protests that kept thousands of students out of school. It was concerned parents – from disparate backgrounds, with different personal and cultural values – who formed a surprising united front. Selena Ross and Sahar Fatima report on how they came together 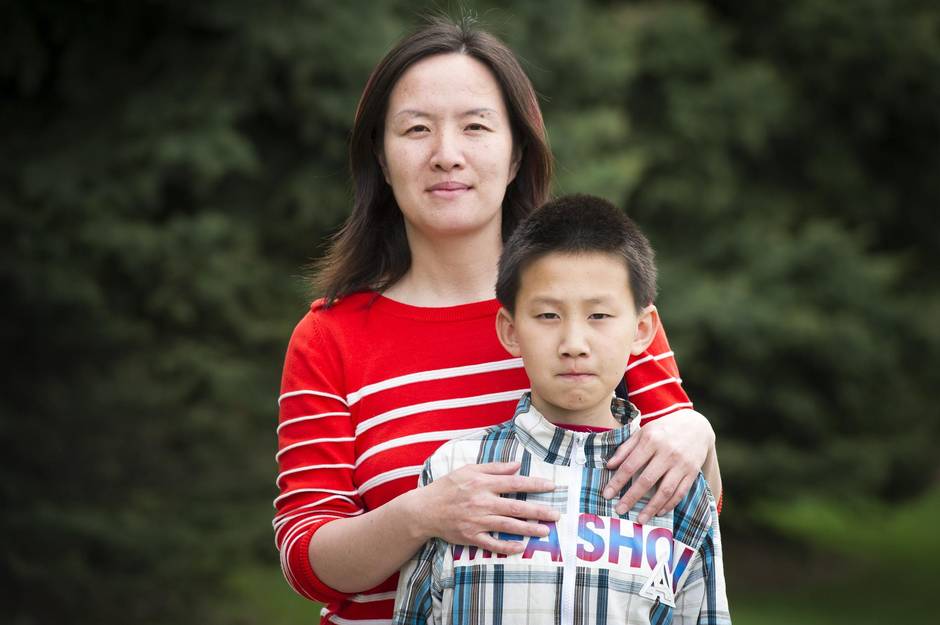 Christina Liu and her son Andrew. (Kevin Van Paassen for The Globe and Mail)

In March, 12 Chinese-Canadian parents from Thornhill held a meeting and then founded the Parents Alliance of Ontario for Better Education, which grew within a few weeks to 3,000 members.

In April, the Polish-Canadian Parents Association came into being in Mississauga, establishing a mailing list that connects ethnically Polish parents for the first time.

Both groups, like others that sprang up across the province, had a single purpose in mind: to fight the new sex-education curriculum that will be introduced in schools in September.

Gerri Gershon, Toronto District School Board trustee for a swath of northeast Toronto encompassing Thorncliffe Park, Lawrence Park and York Mills, said in three decades as a trustee she’s never seen newcomer parents organize themselves politically in such numbers, alongside many Canadian-born parents.

While the sex-ed protest was not relegated only to newcomers, it brought disparate groups together to form a sizeable coalition on the issue.

There’s something unique about sex ed, said one of the Chinese-Canadian organizers, Christina Liu. Until this spring, the people in her group were “normal parents” who held to a firm principle: “Respect teachers,” she said. But to parents, how kids think about sex is too important to leave them with lessons that aren’t quite right, she said.

“This is the children we’re talking about,” she said. “There’s no second chance.”

She and other parents proved to have powerful organizing capabilities, as tens of thousands of Ontario school children were pulled out of class this week in a co-ordinated show of opposition to the curriculum, which is its first update since 1998.

At the TDSB, there were more than twice as many absences this past Thursday as the previous Thursday, with roughly an extra 15,000 children out of school, according to a board spokesman. At Thorncliffe Park Public School, in a neighbourhood where national statistics show that 70 per cent of residents were born outside of Canada, only about 130 of 1,350 students showed up on Monday.

Ms. Gershon, the trustee for Thorncliffe Park, said she suspects there hasn’t been enough communication from the province to parents. “You wouldn’t believe some of the garbage that they’ve been told,” she said. “Unfortunately, a lot of them have been influenced by their friends and what their friends have been saying.”

The involvement of so many different ethnoreligious groups in such a protest is “not that common at all,” University of Toronto politics professor Nelson Wiseman said. He said in many cultures, talking about sex to children is seen as “mixing the innocent with a thing that still has lots of taboos around it.”

But parents such as Ms. Liu say their objections haven’t been understood. They describe philosophical differences over sex and how to convey its seriousness to children, rather than whether or not to teach the mechanics of safe sex. 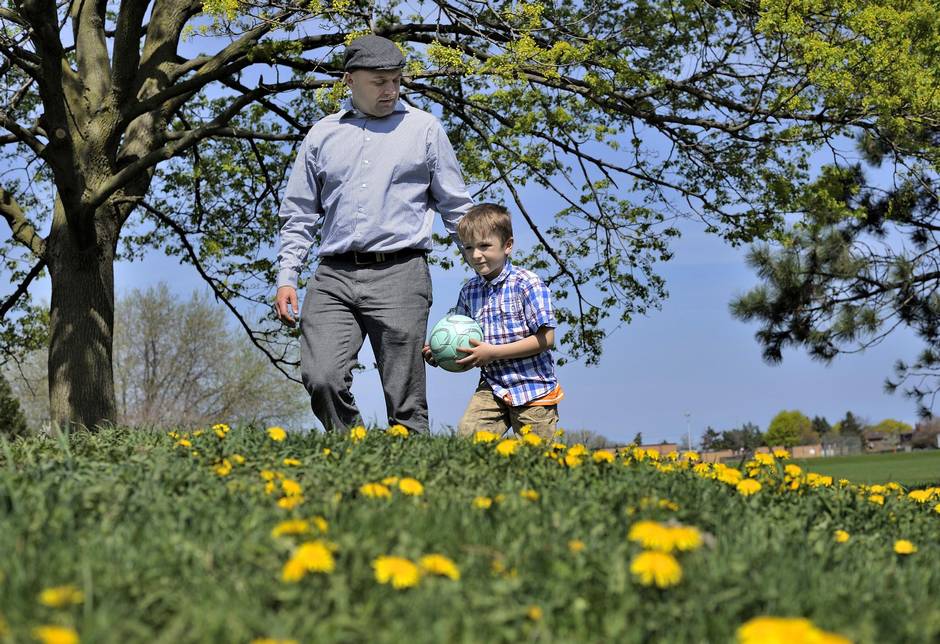 Michal Szczech and his son. (J.P. MOCZULSKI FOR THE GLOBE AND MAIL)
There’s a really deep, deep meaning of love and sexuality, and I believe this is really a crime to tell children otherwise, that there’s no connection there.
Michal Szczech, parent

It’s not about what’s in the lessons, said Michal Szczech, who moved to Canada from Poland in the mid-1990s. It’s what’s missing from it.

“Take a guess: How many times does the word ‘love’ appear in the curriculum?” said Mr. Szczech, a father of two.

That word doesn’t show up at all in the context of sex or relationships. “People that have Catholic backgrounds and Polish backgrounds … it’s really astonishing, because to us, sex is an expression of love,” he said. “And if we’re teaching children a curriculum that totally decouples love from sexual activity, we worry that our children are going to become sexually crippled.”

Mr. Szczech has been e-mailing 70 or so people about sex ed, who then forward the information to their own networks.

“Love” wasn’t the only word missing, he said. The word “couple” shows up only twice, while the word “partner” is used hundreds of times in connection with sex. “Partner” reminded Mr. Szczech of how children are constantly told to pair up for gym, or arts and crafts, and it’s the wrong word to use at school when talking about sex, he said.

“It’s open to more than one person, and it’s very much a temporary, ad-hoc kind of arrangement that can change at any time,” he said.

"Our students deserve an up to date, research-based curriculum that provides them with the skills they need in today’s complex and ever-changing world,” she said, in a statement. “We want to ensure our kids have access to accurate information to make informed decisions about their health and well-being."

In fact, the high school lessons mention couples at one point and hint at the idea that you should feel love toward someone you have sex with.

The student should “make sure that my relationship with my partner is affectionate and respectful and that we feel comfortable discussing what we find pleasurable and what our sexual limits are,” the curriculum reads.

But to Mr. Szczech, that’s not enough.

“There’s a really deep, deep meaning of love and sexuality, and I believe this is really a crime to tell children otherwise, that there’s no connection there.”

Christina Liu helped organize parents across Toronto’s suburbs and as far as London and Waterloo. They pulled all-nighters translating curriculum pages, news articles and research papers about teenage sexual health into Chinese, and they communicate with their network of thousands over the Chinese social media forum WeChat.

Ms. Liu said she worries her nine-year-old son will be taught that it’s okay to experiment with sex just for pleasure, without thinking of the bigger picture.

“I had sex before I was married, okay? But I knew the man was the one I would be living my life with. I’m committed,” Ms. Liu said. “And that’s what I taught my son when I took him out of school for the strike,” she said. “I taught him, I said, ‘Look, you don’t make a commitment lightly. And when you make your commitment, you stick to it. That’s your responsibility.’”

The curriculum doesn’t promote the idea that sticking to a single partner will help reduce risks of infection, she said. She also tells her son there are many things in life that demand his attention: academics, friendships.

“I want to tell him [sex] is pleasurable,” she said. “But however, at what age do we tell them it is pleasurable? Like, drinking beer in the summertime can be [a] very fun to do. But do we promote that to children?

“In many things in your life, there is a balance.”

Ms. Gershon said she disagreed with the parents’ belief that the curriculum discusses sex without love and commitment.

The curriculum is just a guideline, and teachers and principals are “very sensitive” to their students’ cultural backgrounds and their parents’ fears of the sex-ed curriculum, she said.

“They don’t approach these things with a very militant attitude. They’re very, very conscious of the communities that they work in,” she said.

“They’ll talk about healthy relationships, which is what every culture wants for their children,” Ms. Gershon added.

For Azeem Mohammed, any in-depth discussion of sex in the classroom is a problem.

“Parents should be teaching their kids, not the teachers,” the school council chair of Fraser Mustard Early Learning Centre said. “We’ve said from the beginning: Touch on the bases and then move on. Don’t go deep into it.”

He said the curriculum normalizes the idea of sex among teenagers and that children need to receive a strong message that it’s something that needs to wait until they’re married adults.

Teaching the biology of sex and reproduction is fine, he said, but the curriculum should make it clear to students that those who do choose to have sex at a younger age are not the new norm.

He also said that, for him, a main concern is the idea of introducing children to different gender and sexual identities, which he said would confuse children at an age where they can’t even dress themselves.

He said he was approached by many concerned Thorncliffe parents, whom he supported as they distributed flyers, posted to Facebook and exchanged instant messages over WhatsApp. They also spread information about the strike through word of mouth, speaking at mosques, churches and synagogues.

“It’s a slap to the ministry,” Mr. Mohammed said, who kept his three elementary school-aged children home on Monday. He said the Parents Association, made up of residents of various backgrounds, has not distributed summaries of the curriculum for fear of being branded as spreading misinformation; instead they’ve sent links to the actual online document.

Though some flyers and viral messages in different languages did include inaccurate information, Mr. Mohammed dismissed such actions as the work of a few misinformed people.

Ms. Gershon said many newcomer parents are in favour of the curriculum and she hopes that community-level conversation will help ease some of the opposition before September.

She has already organized sex-ed training classes for parents with a public health nurse and more Muslim parents tried to sign up than she could accommodate in the first two-day session, she said.

“It’s not a quick fix, but we hope over the year we’re going to get hundreds of parents.”

But an Etobicoke parent who is helping organize the protests citywide says they won’t fizzle out. Sarah Rommeo, who belongs to a parent group called My Child My Choice, said about 25,000 parents across the GTA have signed on to pull their children from public school in September if the curriculum doesn’t change, turning instead to private schools, home-schooling or community-based home-schooling co-operatives, with the responsibility shared between different parents in the area.

“It’s past any race, past any religion,” she said.

Editor’s note: An earlier version of this story attributed a passage from the provincial curriculum to Mr. Szczech. This has been corrected.