Councillor Doug Ford is once again defending how the mayor of Toronto spends his time, saying his brother's internal itineraries are not an accurate reflection of his long and jam-packed days.

"I'll tell you right now, every meeting Rob has isn't on his schedule," the councillor said. "It's very simple. He doesn't want people being harassed with the media and he goes from morning to tonight. He goes to events, he does constituent calls ... I just walked by his office: there's four constituents in there waiting for him right now."

Although Mayor Ford is well-known for his personal touch with average Torontonians, he logged significantly fewer meetings with constituents this summer than he did last, according to internal schedules obtained through the freedom of information act.

The mayor recorded 32 meetings with unnamed constituents from July 1 to Sept. 22, a 77-per-cent reduction from the 143 constituent meetings that appeared on his itinerary for roughly the same 12-week period in 2011.

That is an average of between two and three constituent meetings a week this summer, compared with nearly 12 per week over the same period last year.

Councillor Ford said the apparent reduction in one-on-one time with constituents does not mean the mayor is changing his focus, as some of the mayor's critics have urged him to do.

"No, no Rob's focus is always servicing the people. Customer service. Reducing the size and cost of government. Looking at every dollar," the councillor said, adding his brother will continue to push for subways and a "transparent and accountable government."

The mayor's office declined to comment Monday on the latest itineraries. The mayor does not publish even a rudimentary list of his appearances.

Reporters can only obtain the mayor's schedule after-the-fact through requests under the freedom of information legislation.

The names of the constituents with whom the mayor meets are always excluded to protect their privacy.

While the mayor's supporters praise him for responding by phone or in-person to constituent complaints, some of his foes say Mr. Ford's time would be better spent on pressing issues that affect the whole city.

"Here we are at mid-term and [Rob Ford] is beginning to learn what the mayor's job really isn't, the things that he really can't do the way he used to do as a councillor," Councillor Shelley Carroll said. "[But] he still hasn't figured out what his role really is."

Josh Colle, a centrist first-time councillor, said he hopes the change in the mayor's itineraries means now his eyes are on a more important prize.

"One read on that could be that he's shifting some new attention to that [policy] stuff and I think that would be a good thing because, as I repeat all the time, we've got so much to do down here," he said.

"I'd like to think it means he's focusing more on the city-wide stuff, as opposed to just doing less."

It is difficult to determine the accuracy of the mayor's internal schedules.

They do not include, for example, the time Mr. Ford spends returning phone calls or coaching football, nor do they include some events he drops in on at the last minute.

The latest batch of mayoral itineraries also does not show that, in the place of meeting with constituents, Mr. Ford was attending more public engagements or private meetings with his council colleagues instead.

Both categories went virtually unchanged between the summers of 2011 and 2012.

The Globe and Mail defined "public engagements" as any event at which regular Torontonians could see their mayor out in the city, including funerals and tours of Toronto Community Housing Corp. projects, but excluding radio and television interviews.

The mayor also found time to meet with Chris Rudge, the CEO of the Toronto Argonauts, Marcel Aubut, the president of the Canadian Olympic Committee, Sheldon Adelson, the billionaire head of the Las Vegas Sands empire, and two candidates for senior city posts.

He met with Jennifer Keesmaat on July 18, shortly before she was appointed Toronto's new chief planner and with a "candidate for fire chief" on July 11, the day before Jim Sales was announced as the new man in that role.

Myer Siemiatycki, a municipal politics expert at Ryerson University, said there is nothing in law that requires the mayor to keep a schedule, even a private one.

But it is rare for a major political figure to refuse to make a rudimentary list of public appearances available to media, he said.

"This is just one more way in which Mayor Ford is a very different kind of mayor," Prof. Siemiatycki said.

Poll shows 26 per cent of Torontonians think Rob Ford should be re-elected
October 5, 2012 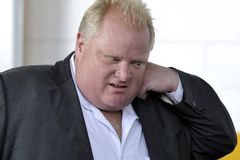 Mayor Ford says he will oppose transit fee or tax, but votes for public consultation
October 9, 2012
Follow Kelly Grant on Twitter @kellygrant1
Report an error Editorial code of conduct
Due to technical reasons, we have temporarily removed commenting from our articles. We hope to have this fixed soon. Thank you for your patience. If you are looking to give feedback on our new site, please send it along to feedback@globeandmail.com. If you want to write a letter to the editor, please forward to letters@globeandmail.com.
Comments