Toronto Mayor Rob Ford has been cartooned and photographed, had his likeness sculpted from butter – now he's been captured on canvas by one of his City Hall allies, Scarborough Southwest Councillor Gary Crawford, who's hoping to present the mayor with the finished acrylic portrait this week.

"I don't know if it's a flattering picture of the mayor," Mr. Crawford said Monday in the basement studio of his Scarborough home. "But it is Rob."

There's no denying that. It's a colourful, full-face portrait of the controversial politician, a sort of force field of largely yellow, static-like energy emanating from his head or falling down like confetti around his beaming countenance. This Riopelle-meets-Monet splatteredness resolves into a blur of darker colours to the mayor's left (viewer's right) and to lighter, even pinkish hues on the painting's opposite edge.

The painting is destined to go places – namely, Mr. Ford's mother's mantel. The piece was commissioned by Diane Ford about three years ago, but "with the demands of the job, I never got around to it," Mr. Crawford said. No fee was paid for the portrait, and Mr. Crawford cleared the project with the city's Integrity Commissioner.

Mr. Crawford, who has a BFA from York University and remains a dedicated artist, started working on the painting in early August, eventually committing 150 hours to it before signing and varnishing it and calling it done last week.

He says the 91 centimetre by 76 centimetre portrait – "the head is a little larger than life" – represents a struggle "between depicting the person, the man, the husband, the son, all of that, with the image of who the man is, the public figure … There's the side that his mother sees, that sort of soft, quiet, shy person. Which he is: his nature tends to be very shy, very reserved … But then there's everything else that is going on around him."

A councillor since 2010, Mr. Crawford, 53, first met Mrs. Ford at the Toronto Outdoor Art Exhibition, held every July at Nathan Phillips Square. On Mr. Ford's watch, Mr. Crawford has been asked to "give his opinion" on candidates for the Mayor's Purchase Award, handed out on Mr. Ford's behalf by his mother.

Mr. Ford did not sit for the portrait. Instead, Mr. Crawford "grabbed dozens of photographs" off the Internet and just went from there, often working as many as seven hours a day in his basement lair.

This being the digital age, Mr. Crawford also posted regular updates on Twitter of both his process and progress "on the many, many faces and complexities of the man." There's a video in the offing, too, likely to debut Thursday on YouTube.

Mr. Crawford, who earlier this year helped realize a major increase to the city's operating arts budget, said he likes to paint large canvasses – 1.2 metres by 2.5 are no sweat for him – and indicated he could have done that for the mayor. However, mindful of his patron and the size of her home, "I knew I had to bring it down."

Mr. Crawford dropped the work off Saturday at Mrs. Ford's Etobicoke digs, where it was placed above the fireplace in the family room.

On Sunday, many family members – but not the mayor himself – showed up to inspect it. Mr. Crawford said Mr. Ford's brother, Councillor Doug Ford, approved of the painting.

"She loved it, she absolutely loved it," Mr. Crawford said.

The only thing remaining to be done to the painting is the framing. Mr. Crawford's getting someone else to do that. "150 hours with the mayor in the summer in your basement – that's enough for me!" 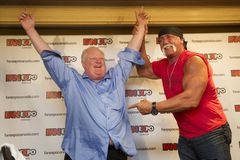 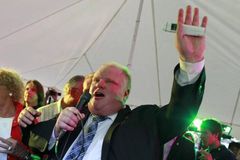