This is the final part of a four-part series examining support programs and services for lower-income residents in Mississauga, Brampton and Caledon – the cities and towns of Peel Region more known for their affluent middle and upper classes than a growing population who live in poverty. 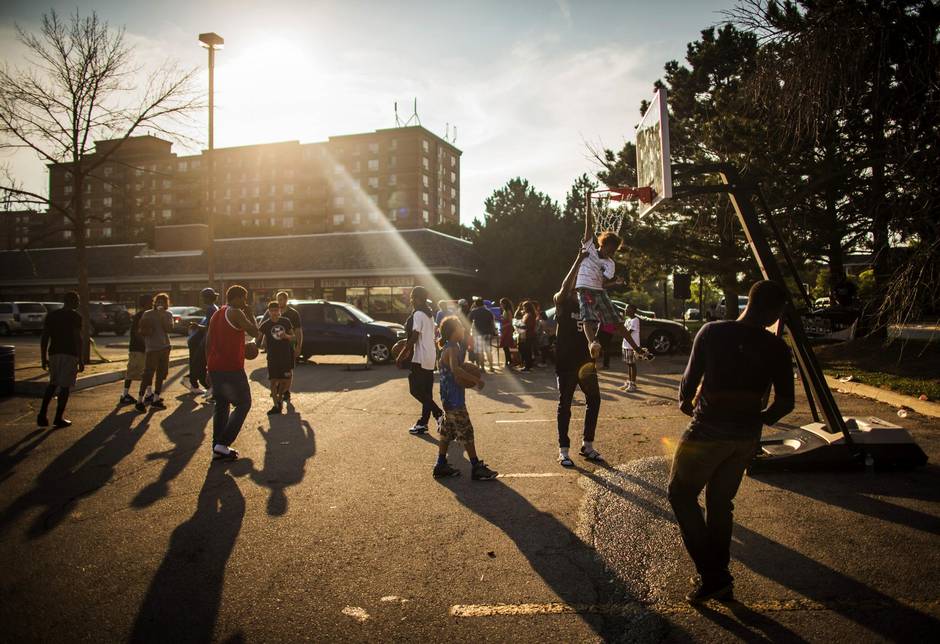 Supporters see urban courts as safe spaces for youth to play – and grow. Opponents fear drugs and violence. Dakshana Bascaramurty reports on the standoff over basketball and community

Tristen Mason, all bent knees, dangling arms and furrowed brow, takes several decisive steps backwards as he guards an opponent who is dribbling up the court. The 19-year-old’s gaze darts around, checking other players in his periphery. The intensity of his movements breaks for a moment – as does game play – when a woman in a salwar kameez obliviously, comically, pushes a stroller right through the middle of the court, her two young children, faces buried in snow cones, shuffling alongside.

Such are the perils of playing pick-up basketball on a “court” that is really just two portable nets set up for a community barbecue in the parking lot of a suburban plaza beside a bouncy castle and shaved ice stand.

On a recent scorching August day, this was one of the few places the basketball-crazed teens in the neighbourhood of Colonial Terrace in south Mississauga could play five-on-five, practice alley-oops and even throw down a handful of dunks on nets that were mercifully lower than NBA regulation height.

But by next summer, Mr. Mason and his crew should have a brand new court to call their own – one where the nets are actually planted into the ground – thanks to a $225,000 grant from the MLSE Foundation.

Programming, for the most part, does not take into consideration the context and the lived experiences of black youth and black families in the region.
Sharon Douglas, United Way Peel

It took local youth six years to get it. The reasons for the extended delay include a reported lack of available funds and an excess of bureaucratic red tape. The length of the process also highlighted the sometimes racial tensions that surround the sport and the role it plays in the community.

In the GTA, no public park facilities are more fraught than basketball courts – which, despite their popularity, are fewer in number than other recreational facilities. At a public meeting held to discuss the proposed Colonial Terrace basketball court before it was approved, many residents listed off the things they thought a court would attract: drugs, violence, disrespect of older people. 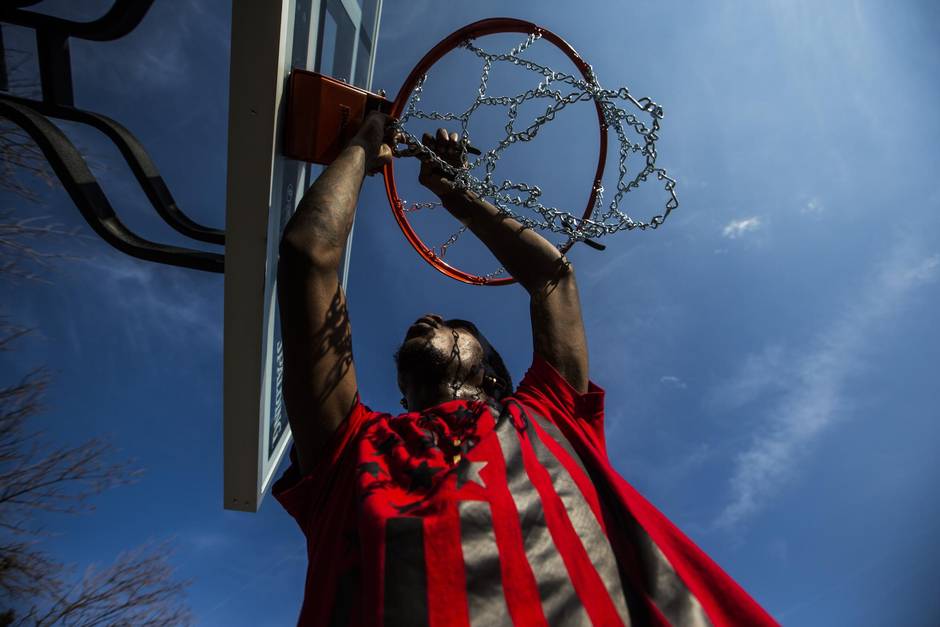 Tristen Mason fixes the chain mesh on a temporary rim.

“We know that the first thing that goes wrong in the court, people are going to be up in arms,” says Darcy MacCallum, executive director of the Erin Mills Youth Centre, who had advocated for the court.

“Any time this community has been in the news it’s been because of violence,” Mr. McCallum says. “It overshadows all the resilience and good things around here.”

At that meeting, advocates had to reassure residents there would be a fence around the court, it would be locked at certain hours, it would be supervised at all times. It was a hard-won battle, just for a court.

Black youth in Peel Region (composed of Mississauga, Brampton and Caledon) feel that recreational facilities in their communities don’t reflect their interests, according to a May report by United Way Peel. Some specifically noted that hockey rinks and baseball diamonds are plentiful, but basketball courts, the preference of many, are not. The ones that do exist sometimes suffer from the city’s neglect. As a result, some kids use hard-earned cash from part-time jobs to play basketball at the private gyms nearby. Others will bike or take a bus to shoot hoops at public courts across town, where playing every weeknight could mean $30 each week in transit fare.

“Programming, for the most part, does not take into consideration the context and the lived experiences of black youth and black families in the region,” says Sharon Douglas, the director of community investment at United Way Peel.

We don’t welcome the concept, at all, of gang bangers … selling drugs on outdoor basketball courts.
Councillor Giorgio Mammoliti

From Mississauga to Brampton, Etobicoke to North York, opponents have decried courts as magnets for drug dealers and violence. Community organizers and non-profits, meanwhile, insist courts have the opposite effect on neighbourhoods: free courts provide a space for black youth to safely gather, United Way Peel’s president Shelley White says.

Mr. Mason, the son of Grenadian immigrants, interprets opposition to the court as veiled racism.

“Some people saying that building a basketball court is just gonna bring drug dealers and all that? That’s just people who don’t like us,” he says.

He says he’s been hassled by police many times before and made to feel unwelcome by neighbours when hanging out with friends.

“I’ll give one of my friends a high five – they think I’m selling drugs,” he says.

While a group of white teens gathering at a park or in a mall are “hanging out,” if they’re black, they are often seen as “loitering,” Ms. White says.

At a public court in Mississauga that 16-year-old Shayla Parkinson plays at, unprovoked and unwarranted visits by police became a regular occurrence.

“When they first had the net out, and people started playing later into the night, [cops] would drive by and be asking questions,” she says.

Peel Regional Police did not make the force’s chief or deputy chiefs available for an interview. A spokesperson said the force does not have data on policing basketball courts. 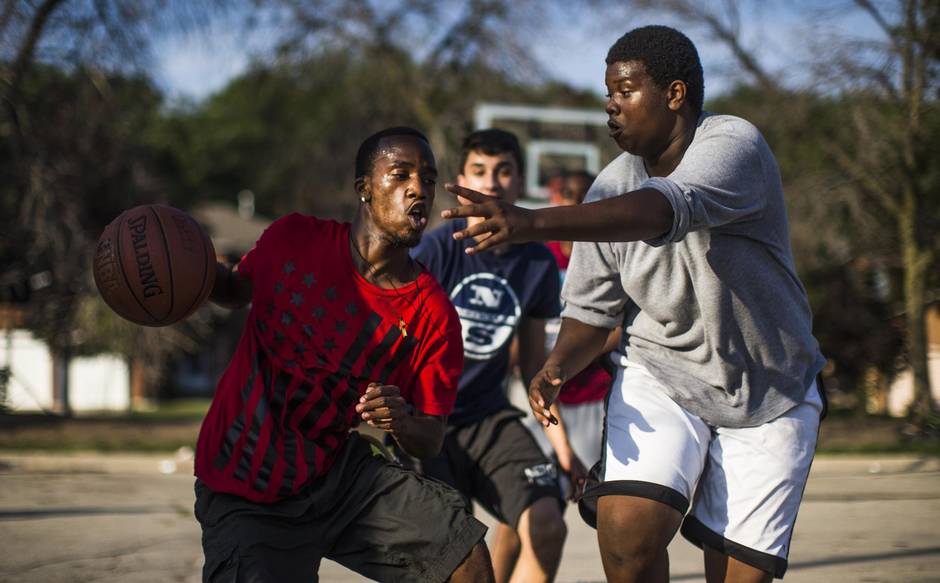 Some people saying that building a basketball court is just gonna bring drug dealers and all that? That’s just people who don’t like us.
Tristen Mason

To some, the patrolling of courts seems necessary. Opponents point to the gun violence that has sprung up around them in the past decade: between 2008 and 2010, at least four serious shootings happened on basketball courts in the GTA, three of them fatal.

One occurred near Dixon and Islington, a neighbourhood made infamous in 2013 after police conducted a major drugs and weapons raid of six towers – the culmination of a year-long investigation called Project Traveller, which involved the video of former Toronto mayor Rob Ford allegedly smoking crack.

What has happened to the Dixon basketball court suggests that it may not be the sport or the players that are the problem, but rather public spaces that aren’t maintained.

A decade before the Project Traveller raids, that same stretch of Dixon was in the papers for another reason: former Toronto Raptors legend Vince Carter, perhaps the most beloved athlete in the city at the time, donated $130,000 through his foundation to open a public basketball court. At the time, The Globe and Mail described it as the “‘Rolls-Royce’ of outdoor basketball courts” and more than 1,000 residents showed up for its unveiling.

Community organizer Munira Abukar says when she and her brother would attend Sunday morning Islamic classes in the towers a decade ago, she’d go home right after, but her brother wouldn’t return until late in the afternoon. Like dozens of other youth in the area, he was content waiting hours for a chance to play a pick-up game on the famous neighbourhood court.

These days, the backboards are rusted. One rim has no net; the other is torn-up and ratty: like a once-voluminous coif thinned to a comb-over. Empty water bottles, McDonald’s cups and even an old 3.8-litre bleach container are scattered over the grass around the court. For a stretch, even the rims were taken down, effectively rendering the city-owned court useless.

Some parents are leery of sending their kids to the court at night, since some of the lights installed there often don’t work and its location, right on Dixon, makes it “perfect for a drive-by.” When the nets are cut down or rims go missing, youth also avoid the court. Ms. Abukar can remember at least two shootings that have happened here. 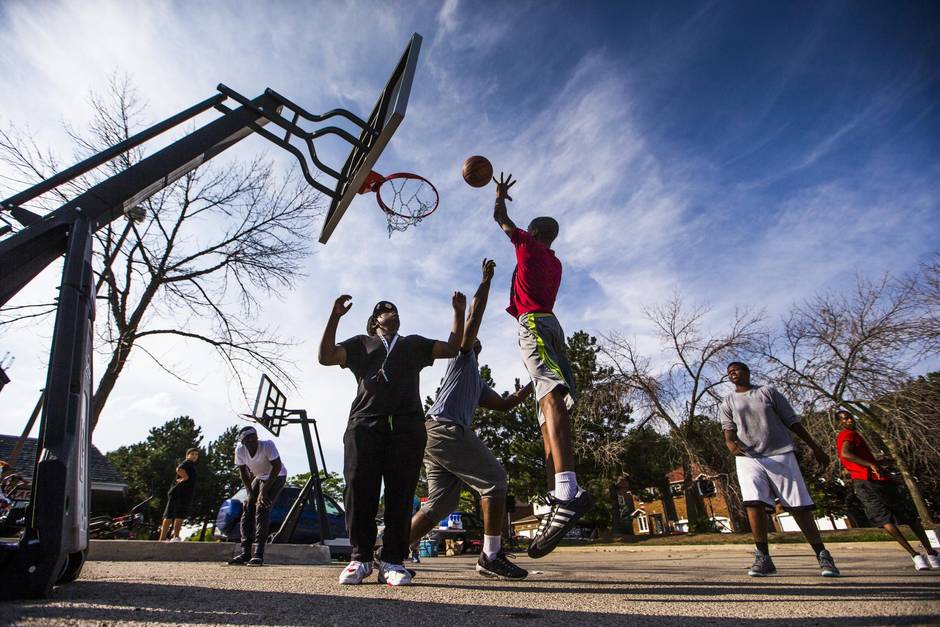 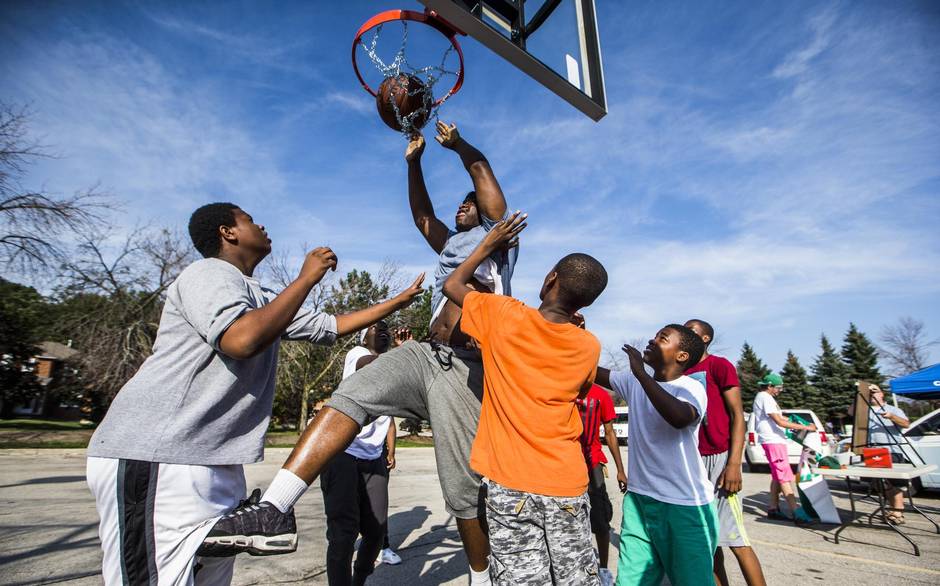 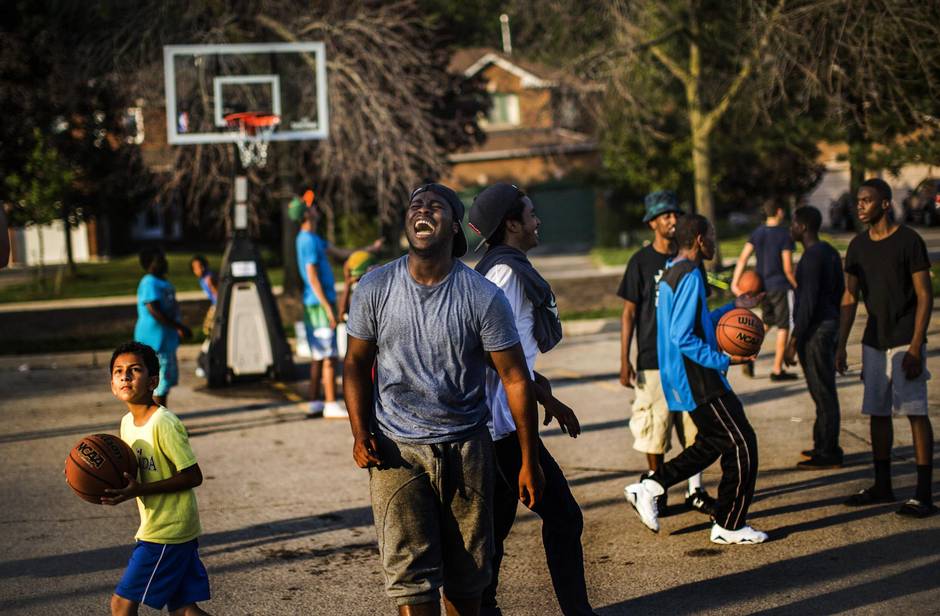 In 1982, George L. Kelling and James Q. Wilson popularized the “broken windows theory” in the Atlantic Monthly, arguing that swift repairs to broken windows or cleaning up litter before it accumulated were necessary to prevent damage from escalating and eventually turning a neighbourhood into a hotbed for delinquency.

All of the city’s 133 outdoor courts are maintained and cleaned on a weekly basis, according to the parks department, but Ms. Abukar believes the Dixon one is far more neglected than its downtown counterparts.

Richard Ubbens, the director of parks for the City of Toronto, said maintenance priorities are dictated by use.

“I’d rather fix a light on a tennis court that’s in use every day than send a staff person to hang a backboard when I know that there’s a small group that’s there every other week,” he said.

There’s actually a real psychological, emotional, spiritual and physical benefit of playing basketball together with your friends. It saves a lot of young lives.
Munira Abukar, community organizer

This underscores the need for well-maintained courts. When they’re in good shape, they attract exactly what they’re supposed to: basketball.

Northeast of Etobicoke, in Humberlea, was a court that received even less love than the Dixon one. In 2008, local Councillor Giorgio Mammoliti famously removed the nets, claiming the use of the court had transitioned from basketball to drug dealing.

“We don’t welcome the concept, at all, of gang bangers … selling drugs on outdoor basketball courts,” he said in a recent interview.

Loitering at night was a problem on the court in Strathburn Park, too, he explained, and there was, “a lot of yelling, a lot of screaming, a lot of fights, a lot of guns.”

Mr. Mammoliti said he was told by police in 31 Division about the crime happening on the courts. Following public consultation, the courts were eventually removed and replaced with ball hockey facilities. Crime has dropped dramatically both in the park and across his ward since then, he says.

Constable Victor Kwong, a spokesperson for the Toronto Police Service, said in an e-mail, “I would not be able to verify that. Corporately, that is not a stat we keep.” 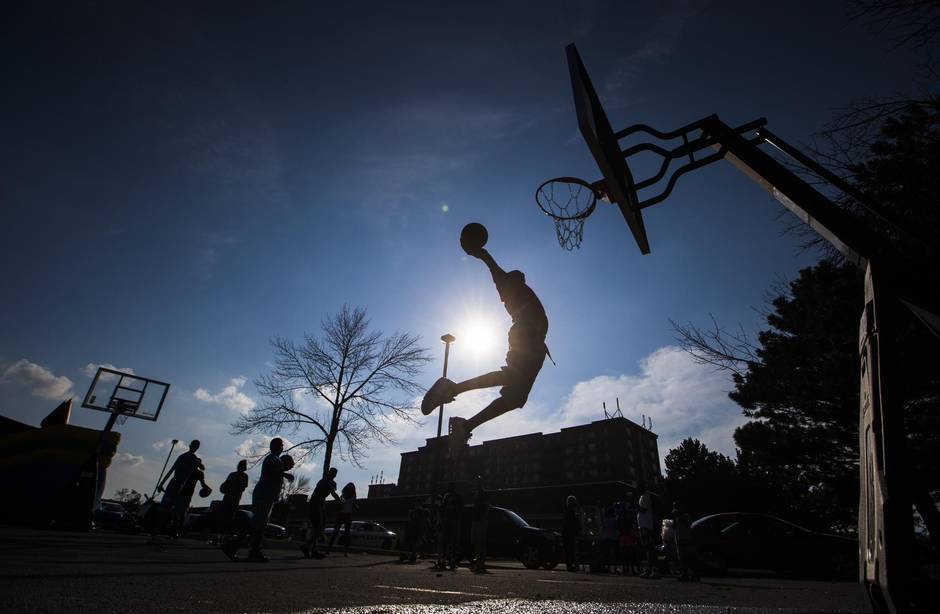 Tristen Mason goes for the dunk.

In her community, Ms. Abukar says basketball serves a greater purpose than pure leisure. “There’s actually a real psychological, emotional, spiritual and physical benefit of playing basketball together with your friends. It saves a lot of young lives,” she says.

Back in Mississauga, Mr. Mason, who has been playing ball since Grade 1, says his neighbourhood has its share of roughness – there was a stabbing by the townhouses in June; three years earlier, a double shooting – but he doesn’t expect that a new court will make those occurrences more common. If anything, it may help to calm tempers, he says.

“People can have problems, but if you get basketball involved, it’s like, whatever problem you have outside, it gets dropped when we’re on the court,” he says, glancing over at the temporary nets where the group he just played with is practising their free throws and layups. “Everyone’s gonna leave their drama at home.”