Bicycles were locked awkwardly at all angles to a wooden fence recently outside the Parkdale Community Centre. The curbside bicycle rings were nowhere near adequate for the dozens of people who had arrived on two wheels for a public meeting presenting plans for an extension of the West Toronto Railpath.

The 3.5-metre-wide cycling and pedestrian path currently runs for two kilometres along the railway corridor, roughly following Dundas Street West, from Dupont Street in the north to near College Street in the south. Now, six years after the first leg opened, cyclists were eager to hear about the three-kilometre extension that will take the mostly off-road path deep into the city to Stanley Park near Strachan Avenue and Wellington Street West, even though work won't start until 2016.

The extension follows the same Kitchener railroad corridor to the Dovercourt Road and Sudbury Street area, where the route reverts to on-road and separated bike lanes for the final kilometre.

Jun Nogami is an engineering professor at the University of Toronto who lives near the north end of the Railpath. He often cycles to work, but says he doesn't make much use of the existing Railpath.

"Right now, it doesn't go anywhere," he says. "So I fight traffic every day on the roads. I'm used to the roads, but it's just so peaceful on the Railpath. The extension will definitely change the way I get downtown."

Daniel Egan, manager of cycling infrastructure for the city, is sure Mr. Nogami won't be alone. The Railpath is already one of the only off-road trails the city plows during the winter, due to demand. He says there are currently 1,200 daily bicycle trips on the Railpath, a number he sees quintupling to more than 6,000 when the route leads downtown.

"This is a unique opportunity. There aren't many locations like this," says Mr. Egan, listing off all the neighbourhoods that will have a mostly off-road route to downtown or the waterfront.

Mr. Egan says the terminus will link to the planned Fort York pedestrian bridge, providing access to the waterfront's Martin Goodman Trail and his department is already planning on-road bicycle lanes to connect the end of the Railpath to protected bicycle lanes on Richmond and Adelaide streets. Those lanes are currently part of a pilot project but he says he hopes they will become permanent by 2015.

Construction won't start until 2016, until after the corridor is upgraded for an increase in GO Transit train service.

That may seem like a long time off to some users, but City Councillor Gord Perks (Ward 14) says the 2016 starting date reflects a huge step forward in the city's relationship with Metrolinx, the provincial transportation agency created in 2006 that owns most of the railway corridor.

"They flat-out refused to consider a bicycle route in 2009 when they were refurbishing their bridges," says Mr. Perks. "They made terrible mistakes in their first few years, when they weren't experienced in dealing with communities, but they've gotten much, much better. Now we have a productive partnership."

Like-minded co-operation is also on offer from the John Tory mayoral campaign, which is proposing a system of "surface subways" to run along the region's soon-to-be electrified rail corridors. Spokesperson Amanda Galbraith says the two proposed "SmartTrack" stations that would overlap the Railpath route would not need to impede the path and could instead become "mobility hubs" where the two systems link together.

That idea of hubs and linkages is central to the whole notion of the Railpath, according to Jeremy Craig, the path's deputy project manager for Victor Ford and Assoc. Landscape Architects.

Mr. Craig says there will be 14 access points where users will be able to get on or off the new portion. Beyond trail amenities such as benches, bike racks and drinking fountains, he envisions small parkettes that will serve as event spaces and gateways, welcoming cyclists and walkers into a part of the city they were previously barred from.

Ward 18 City Councillor Ana Bailao says much of the planning now will focus on how these public spaces can help animate and connect the whole West End. "We want to bring the Railpath into the communities, and the communities into the Railpath," she says. 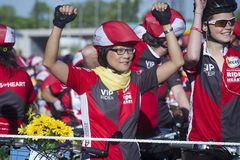 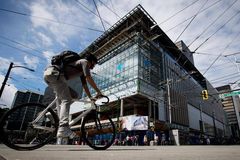