Just after 4 p.m. on April 15, Christopher Baumhour, the director of a funeral home in Toronto's Mount Dennis area, was taking out the recycling when he heard people yelling from a home a few doors away. He raced over and discovered a storefront building at 1285 Weston Rd. on fire.

Mr. Baumhour escorted an upstairs tenant and her German shepherd out to safety and then called 911. "By the time the fire department got here," he recalled recently, "it was thick black smoke."

The blaze, say neighbours, began in the kitchen; witnesses describe firefighters tossing piles of junk out into the street. Toronto Deputy Fire Chief Jim Jessop said an inspection found that the building was an illegal rooming house, with 11 units for tenants, including two in the basement and one in the furnace room.

Dingy fire-trap apartments have long existed in every large city, but an inquest this spring in Whitby into the deaths of three young people living in just such a dwelling has raised tough and pressing questions about the risks facing those forced to the margins of a housing sector characterized by crazy real-estate prices, skyrocketing rents, a dearth of affordable units and an influx of low-income residents.

"What we know is that it's a huge issue and one that politicians avoid," said Wellesley Institute housing expert Michael Shapcott.

Later this spring, however, Toronto City Council will be vetting staff proposals to broaden the regulation of rooming houses in an effort to bring tens of thousands of illegal units into better compliance with fire, building safety and public-health rules.

It's going to be a tough slog, simply because of the numbers. No one really knows how many illegal units are hidden across the city. One neighbour near the house at 1285 Weston said she's heard of several other nearby buildings, including storefronts with active businesses, that are filled with illegal units.

Other neighbours recounted that occupants of the building that caught fire in April came and went at all hours, held noisy parties and kept five large dogs.

"That house is a mystery," said Raul Suarez, a 53-year-old IT consultant who lives in a house two doors away and, like several other neighbours, has erected a fence to keep away revellers and their garbage. "We don't know how many people live there." When he contacted police, the officers who responded urged him to move.

Fire officials subsequently laid numerous charges against the owner of the property, which has been registered to Caledon East resident Iolanda Aloia since 2012, for not having proper exits, fire-retardant walls and smoke detectors.

When contacted, Ms. Aloia said, "No comment, I don't feel well," and hung up.

While Mr. Jessop said no one was seriously hurt, such apartments have claimed numerous lives, including the owner of an illegal North York rooming house, who died during a fire last November, and the basement tenant in a Scarborough semi-detached engulfed in late December. In that case, according to media reports, two pets died and another occupant was critically injured.

In Whitby, a coroner's inquest probe into the deaths of three people who died in 2012 has heard the house had been carved up into small apartments.

The owner, Andrew Strzelec, had been previously convicted of fire-code violations, but has denied responsibility. The victims, Marilee Towie, 18, Benjamin Twiddy, 19, and Holly Harrison, 17, couldn't escape because the stairs leading out of the apartment were on fire and there was no other exit. Their last moments were recorded on a 911 call. The teens pleaded for help, screaming they couldn't get out, according to a transcript of the emergency call released at the inquest.

Despite such stories, hundreds of apartments in rooming houses with serious safety risks continue to be rented out.

Renata Galamb, a 30-year-old Hungarian Roma refugee, said through an interpreter that she lives in a Parkdale rooming house with such deficient wiring that tenants can't use certain electrical appliances, such as portable heaters, at the same time; many also rely on a risky patchwork of extension cords. There's no superintendent on site and the room with the fuse box is padlocked. "If you don't pay attention carefully enough, something could catch on fire," Ms. Galamb said, adding that she pays $800 a month for a junior one-bedroom.

Her lawyers at Parkdale Community Legal Services (PCLS) said the owner of the two-building, 30-unit complex has been cited for a range of related code violations, including a lack of smoke detectors and portable extinguishers, and obstructed fire exits. "The most marginalized groups of people end up getting pushed to the bottom," observed Cole Webber, a PCLS community legal worker.

Housing experts like Mr. Shapcott added that the number of illegal and potentially unsafe small apartments – from rooming houses to basement units – is soaring, although no one can say precisely by how much.

"Unless a complaint comes in," said Toronto Fire Chief Jim Sales, "we don't know if a residence has been converted to a rooming house." He adds that Toronto Fire Services has stepped up its inspections. "We're uncovering things we weren't aware of."

Two other factors have driven demand in recent years: the growing ranks of postsecondary students (campuses are typically surrounded by neighbourhoods with lots of multi-unit dwellings), and downtown gentrification, especially in communities like Parkdale that once touted many rooming houses which have gradually been converted back to single-family homes.

The bylaws governing these low-end apartments – which are recognized by the city as an important segment of the affordable-housing market – are confusing. Every dwelling is theoretically subject to building, public-health and fire codes, while landlords who repeatedly ignore safety codes may now face lengthy jail terms for criminal negligence, thanks to a 2014 Ontario Court of Appeal ruling.

The city's zoning bylaw, meanwhile, only formally permits rooming houses in the old City of Toronto, York and part of Etobicoke. In these areas, the city requires landlords to obtain licences and submit to periodic inspections, although thousands more private homes contain apartments that may not meet fire-code requirements, such as multiple exits or alarms.

Yet according to rules that predate the city's amalgamation, rooming houses are not legally permitted uses in Scarborough, North York and East York – all areas where councillors have balked at allowing such dwellings in their own communities.

Regardless of the regulations, there are thousands of such apartments across every neighbourhood in the City of Toronto, says Mark Sraga, director of investigations for Toronto Municipal Licensing and Standards (MLS). "We know they exist. From my perspective, the status quo doesn't work. We can't be burying our heads in the sand."

In June, he says, city council's executive committee will vet a staff report from MLS recommending that council vote to extend the rooming-house zoning across the entire city, and then establish a more "robust" licensing system.

The proliferation of unregulated apartments such as the one that caught fire on Weston Road in mid-April could lead to a tragedy like the 1989 fire that consumed a three-storey rooming house near Queen and Parliament, killing 10 people. "The owner had converted one of the hallways with a fire escape into a bedroom," says Mr. Shapcott. "The people in the building really had no chance."

In the wake of that disaster, the city, using provincial funding, launched a pilot project that provided loans or grants to landlords if they invested in renovations to bring their properties up to code.

Sean Gadon, director of Toronto's affordable-housing office, says the city has run a similar $5-million program in the past year, offering $24,000 per room, to be spent on safety improvements in exchange for an agreement to maintain affordable rents for 15 years. Mr. Gadon says his office got inquiries from landlords in parts of the city where rooming houses are not permitted, but had to turn them away because of the zoning rules.

Back at Weston Road, Mr. Suarez showed off a pile of junk, an abandoned vehicle and the burnt-out rear kitchen window of his neighbour's house, which is still inhabited. He described yet another rooming house next door, where a basement tenant fell asleep while cooking and set the kitchen on fire.

"It's just a matter of time before there will be a fire," added Mr. Baumhour. "That was everybody's concern a long time ago." 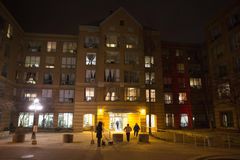 Seniors’ home where three died in fire not subject to provincial inspections
May 16, 2018 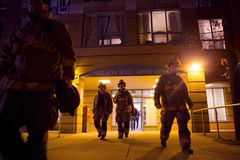 Three killed in fire at Toronto seniors’ building
May 16, 2018