The distraught owner of a monkey seized after being found wandering at a Toronto IKEA is calling for the animal to choose whether he wants to return to her care.

Yasmin Nakhuda has taken care of Darwin, a rhesus macaque, for the last five and a half months. She says they "bonded" and that he is distressed when separated from her. She played with him and took him along while working and shopping. She says she even showered with him and there is video of them brushing their teeth, him beside her and aping her actions.

But on Sunday the seven-month-old was taken by city staff and a day later he found a home, at least temporarily, at a primate care facility northeast of the city.

The change left Ms. Nakhuda frantic. She derides the sanctuary for believing they could do better, saying that they don't even know it's actually a Japanese snow macaque.

"This monkey cannot be away from me for five minutes without having a panic attack as baby monkeys only step off their mother's back when they have their mothers in view," she wrote in an email Tuesday evening. "They only feel safe if they know their mother is around to protect them from predators. ... For now Darwin needs my back. And I need him back."

The move to Story Book Farm Primate Sanctuary – which launched a fundraising appeal Tuesday -- capped an eventful day for the seven-month-old monkey.

The monkey's owners were fined $240 for breaking the city's bylaw on prohibited animals. According to city staff, they said they got the monkey in Montreal when he was about one and a half months old.

Ms. Nakhuda told reporters that she agreed to care for the monkey on a temporary basis but that he was too distressed at leaving her to be given back. She believes the separation is weighing on him now.

"How do we know what he needs unless he's given the right to choose?" she asked CP24 early Tuesday. "I think he should be given the right to choose. If he chooses something else than me, that's fine. For me, it has never been about me, it has always been about him." In previous interviews she said the monkey "cannot live without me" and that "he needs his mother like a child needs his mother."

"Is anyone at the sanctuary willing to have Darwin on their backs for 24 hours a day and 7 days a week?" she questioned in her email. "For this is how he lived with me. There were no signs of him being unhappy or stressed out when he was in my care."

On Tuesday she noted that "there are no books" telling her how to raise him and that she learned as she went.

But Mary Lou Leiher, program manager for partnerships and marketing for Toronto Animal Services, said that there are reasons for the city's ban on many species.

"It's a very exotic choice for a pet," she told reporters during a press conference in a cat room at Animal Services' northern region facility. "Common sense would say, 'Get a dog.'"

The couple had formally surrendered custody of the monkey to the city and it was not clear if they would seek visitation rights as he settles in at Story Book Farm Primate Sanctuary in Sunderland, Ont. Ms. Leiher insisted there was "no chance" he could end up in a lab.

"Story Book Farm did not expect to get me for Christmas and we could desperately use funds to help pay for my care as well as the other amazing monkey friends I have made," reads the appeal, called Dollars for Darwin. "I will eat A LOT of food. I would also love to be able to play with toys and other enrichment items and all of this costs money. Please consider making a donation towards my care, this is my Christmas wish."

Rhesus macaques, which have the widest range of any non-human primate, grow to approximately the size of a toddler. A male may reach 17 pounds and stands about 21 inches high. They are omnivorous.

Greg Tarry, a manager with the Canadian Association of Zoos and Aquariums, said monkeys may be small and cute when they are young, but that keeping one as a pet can be dangerous as it grows older and more assertive.

"You start getting into competitions about 'who's in charge here,' and then the animal becomes aggressive," he told The Canadian Press. "And if that happens you've got an animal without social skills unable to live in a society of primates who's too aggressive to live with people. You've basically got an animal with no future at all."

Darwin the monkey and the strange evolution of the 'pet parent'
December 12, 2012 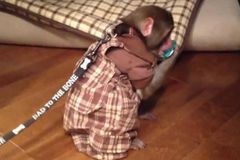 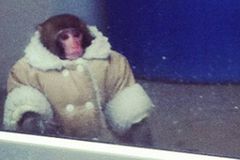