Toronto officials say data from debit- and credit-card machines show total consumer spending inside the city's King streetcar-priority zone is in line with the rest of the city – even though some King Street restaurateurs complain the pilot project is killing their businesses.

A group of King Street businesses, led by Al Carbone, the proprietor of Kit Kat Italian Bar & Grill near King and John streets, has lashed out at the pilot project, which restricts the ability of cars to travel more than one block along King in order to spare the streetcars from traffic congestion.

They say the rules, and the loss of street parking, is driving away customers. And they recently set up ice sculptures depicting a hand giving the middle finger to make their point.

But according to a report on the city's findings, released on Friday, preliminary data from Moneris Solutions Corp. show that customer spending along King from Bathurst Street to Jarvis Street, from October to December, 2017, was "in line with seasonal spending patterns over the last three years." The one-year King pilot project went into effect on Nov. 12.

The value of consumer spending, which generally sinks in January and peaks late in each year, went up from October to December by 21 per cent last year, in line with seasonal growth for the entire city pegged at 20 per cent.

Transit activists also welcomed other numbers in the report, which echo previous statistics about the pilot's effect on the once-plodding King streetcar. The new numbers say transit ridership on the route is up sharply, with 25 per cent more riders in the morning rush hour, 27 per cent more in the evening rush and a 16 per cent increase over all, with 84,000 riders a day.

The streetcar is more reliable, arriving within four minutes 85 per cent of the time, travel times are better by four to five minutes and car traffic on nearby streets, while higher in volume, appears to be moving at close to the same pace as before the pilot, the report says. (Traffic on King itself, not surprisingly, is down sharply.)

Pedestrian traffic, while down, mimicked similar seasonal declines for winter walkers on nearby Queen Street, the city says its numbers show.

Reached at his restaurant, Mr. Carbone – who said he had not yet seen the numbers – said they likely mask the effect of the pilot on businesses like his, since the study area runs all the way from Bathurst to Jarvis, a stretch he notes includes food courts under some of Bay Street's office towers.

"To us, it is a big change. … People sometimes pick and choose the numbers they want to show," said Mr. Carbone, who was hosting 16 diners on Friday from a grassroots ad hoc pro-pilot-project group calling itself King Street Eats.

He said his 65-seat restaurant would normally be full for a Friday lunch, but instead had just seven other customers besides the King Street Eats group. And he said he wouldn't rule out ordering up more ice sculptures to protest, if the cold weather returns: "It's Friday afternoon. People have long lunches, and they are not here … King Street is hurting."

Local city councillor Joe Cressy said the data include numbers from 150 Moneris clients along King Street and show that the weather – not the pilot project – has also slowed business on other streets across the city at the same rate.

He also said he expects the advent of spring, along with improvements that will include parkettes and expanded patios along King Street, will be a boon to business owners, who will also have thousands more potential customers arriving by streetcar.

For a story last week, The Globe and Mail canvassed more than 140 businesses throughout the pilot area and the responses did not suggest the street is deserted, as some opponents insist. But impacts vary widely. While most respondents said business dropped after the pilot launched, around one-third reported it being flat or improved.

Mayor John Tory, speaking to reporters on Friday before the new city numbers were made public, said he had been briefed on them and been told they looked "generally positive on all fronts." But he acknowledged concerns raised by some businesses: "We will continue to make all the efforts we've made to help business. But even the business numbers, as I understand it, are numbers that show, yes, there are some pockets of concern that we have to address but that by and large people are going to get through this." 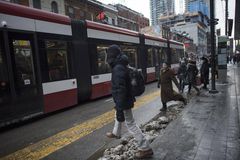