A decision that could lead to the release of documents related to the massive Project Traveller crackdown on gangs and guns in Toronto could come as early as Monday, but even if the judge approves their release, the papers will likely be redacted and placed under a strict publication ban.

Lawyers for a group of media organizations, including The Globe and Mail and the Toronto Star, have been fighting in court since early this summer to unseal documents that led to search warrants in Project Traveller. The crackdown in northwest Etobicoke on the Dixon City Bloods resulted in 44 arrests, and has since been linked with a controversy involving Toronto Mayor Rob Ford.

At issue Thursday were documents related to just one of the search warrants – the only sealed warrant the media lawyers were aware of when the proceedings first began. The Crown argued Thursday that the information should remain sealed under section 193 of the Canadian Criminal Code, which makes it illegal to disclose information obtained through wiretaps. Lawyers for the media, however, argued that the search warrant requests qualify as "judicial proceedings," which would make them exempt from section 193.

Peter Jacobsen, the lawyer for The Globe and Mail and other media organizations including the CBC, CTV and the Canadian Press, called the process so far lacking in transparency.

He pointed to the confusion over the number of search warrants as an example. At the beginning of the court battle, Mr. Jacobsen said, the media organizations were only made aware of one sealed warrant. By Thursday morning, he had been made aware of more than 36 sealing orders, many referencing several warrants. And in court Thursday, the Crown revealed there were more than 80 warrants.

"This hide-and-seek approach is absolutely contrary, in my submission, to the open-court principle," Mr. Jacobsen said in court, referring to the fact that it has taken months to even find out how many sealing orders were obtained by the Crown.

The Crown did not explain why the number of sealing orders had not been disclosed sooner. It argued that some of the documents requested may contain potentially sensitive information, including wiretaps, and details that might compromise the identity of confidential sources.

Crown prosecutor Jeffrey Levy argued that his team needs more time – three to six more months – to review and vet all the documents before anything can be released with respect to the bulk of the warrants. "It's a complex process. It's a complex prosecution. It's going to take some time," he said.

Complicating matters further Thursday was the appearance of lawyers for several of the accused in Project Traveller, who expressed concern that any information released publicly could taint potential jurors in the trials of their clients.

To address these concerns, media lawyers argued for the documents to be unsealed, but for a publication ban – meaning information from them cannot be published – to be put in place.

The court will reconvene next Friday.

The Project Traveller case has received intense scrutiny after a number of those arrested, as well as one of the buildings at which the raids took place, were linked with Mr. Ford. The alleged video purportedly showing Mr. Ford smoking crack cocaine was reportedly held at one point in one of the Dixon Road apartment buildings, and at least two of the men who appeared in a photograph with Mr. Ford that was circulated alongside the video, Mohammad Khattak and Monir Kasim, were arrested in the raids. 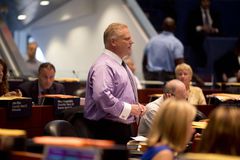 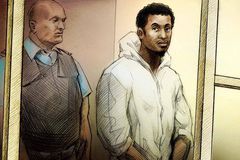