After a winter of bruising defeats at city council, things were starting to look up for Mayor Rob Ford. Responding to an obvious need to change the channel, he was talking up the more appealing parts of his program and his record, from economic development to a cleaner city to his successful drive for concessions from city unions. Then on Wednesday, with a touch that only he could manage, he changed the channel right back again.

His decision not to attend the annual Pride parade on July 1 is a reminder of the worst aspects of his mayoralty: the stubbornness, the refusal to take in other perspectives, the failure to grow in the job and become mayor of all Torontonians instead of just the champion of his own base.

Mayors and senior politicians of all stripes have been going to the parade for years. Their attendance is important not only because Pride is a popular and lucrative city festival, drawing hordes of visitors and bringing in millions of tourist dollars. It is important as a signal that the gay community is an accepted and integral part of the city whose motto proclaims "diversity our strength."

Mr. Ford's snub of Pride Week last year was one of the sourest notes in his mayoralty. It was where his troubles began. Things had been going swimmingly for the mayor before he went off to his family cottage for parade day and skipped every other event of the festival, a boycott in everything but name. They have been rocky ever since.

Why the mayor would want to renew last year's Pride controversy is a mystery. Even if his family cottage weekend is sacred, or he simply feels uncomfortable about going to the colourful parade, it would be the easiest thing in the world for him to help raise the Pride Week flag at City Hall or show up at one of the many other events over the course of Pride's 10 days.

He says he'll have to check his schedule. Really? It's only two months till the festival starts. Friends of Pride have been coaxing the mayor for weeks to commit to some kind of appearance. They have been excruciatingly patient and polite.

Councillor Kristyn Wong-Tam, who represents Toronto Centre-Rosedale, the ward that includes the Gay Village, says she wants to find an event the mayor would feel at ease attending. She even invited him to meet a "respectful and representative" group at a private reception. "Please let me know if this is an opportunity you would be interested in exploring," she wrote to him on Feb. 7, adding that "I am open to hearing your thoughts." She says he has never responded.

The very least he could have done is say that while he can't make the parade for family reasons, he fully supports the event and its aim of full inclusion of the gay community. Nothing doing. His silence leaves the unpleasant impression that he disapproves of Pride, or worse. It is not a suggestion the country's biggest city can afford to leave hanging.

For modern mayors of Toronto, going to Pride is part of the job. David Miller went. Mel Lastman was reluctant at first, but went and had a blast. Brian Burke, the tough-guy chief of the Maple Leafs, marched in tribute to his late son, who was gay.

If Rob Ford refuses once again to have anything to do with Pride, it will be a blot on his mayoralty and an embarrassment for the city. Even his brother Doug is urging the mayor to attend some part of it. Let's hope he comes around and finds a way to go. 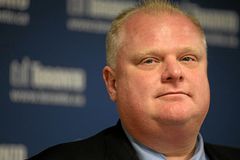 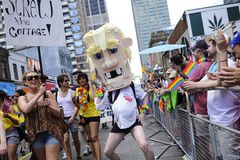