When residents bought units in the Trinity Lofts, a condo project near the Distillery District, they were under the impression that the building would have a "pet spa," a little common area where they could groom their dog so they didn't have to do it in their bathtub.

For more than a year, the building's dog owners have been waiting for that pet spa. "A lot of people bought into the building because they thought 'oh great, there's going to be a dog wash'," said Davelle Morrison, president of the building's condo board. "People want the dog wash."

The spa had been cut from the final design because city imposed new rules requiring more bike lockers which took up the space, says Harley Nakelsky, vice-president of sales at Streetcar, the building's developer. But Mr. Nakelsky says a smaller pet spa will likely be installed now. It's part of a new wave of pet add-ons – dog runs, doggie spas, dog bathrooms – that may soon be expected in new condo developments. The past decade has produced a remarkable shift: 57 per cent of new homes that sold in the Toronto area this past year were condos, rather than houses, according to RealNet. The condo has become the first home for many – and pets are coming with the territory. Residents and city officials are prodding developers to pay attention.

Dogs were one of the top issues that came up in consultations that the city began this past year with condo owners about the needs of their communities. Frustrations were divided between dog owners who want more amenities and neighbours who are being forced to get used to the four-legged tenants. In Toronto's CityPlace development centred near the foot of Spadina, where an informal study pegs the number of dogs to seven per floor, dog owners are often pitted against their dog-leery neighbours who are sometimes disturbed by barking or mess. The reality is sinking in now, and residents and city officials are calling for dog amenities to keep the harmony among residents.

"It's an amazing percentage of people that have dogs in condos, and it wasn't foreseen," says city councillor Adam Vaughan. "And now we've got to figure out how the next generation of condominiums accommodate dog use, because clearly dogs are part of the community."

According to Mr. Vaughan, councillors are increasingly worried about the impact that dog urine is having on plants and trees, dogs that bark when left during the day and people who are uncomfortable with dogs in close quarters.

Torontonians can expect to see more thought go into future buildings to make life easier for both dog owners and their neighbours. "In the past few years it seems to be gathering momentum as a rising hot-button for buyers," says Mimi Ng, vice-president at condo developer Menkes.

Not all buildings are dog-friendly. Ellen Hanbidge, a real estate agent with Bosley Real Estate Ltd., has tried to compile some information on the restrictions at condo buildings across the city. Each one has its own bylaws.

She has only found a few buildings that don't allow any pets at all. But most have restrictions on the number of pets or their size. Price and location are traditionally the top two factors that buyers consider when looking at a new place. But "if you've got a dog and they won't allow it, you're not interested in the building," Ms. Hanbidge says. "Nothing else matters."

Michelle Laracy, a 43-year-old insurance broker, and her husband have a dog and three cats. It became a big problem when they started hunting for a condo this past year.

"It was heartbreaking at times because we fell in love with some places and then found out you were only allowed two pets," she says.

In the end the couple decided to abandon their hunt and just pick a building they liked on the Esplanade that doesn't restrict the number of pets.

Ms. Laracy says that having her dog, Teddi, has brought her closer to her community. "Before I got Teddi, in the old building, I didn't really know a lot of people," she says. "People just get in the elevator, look at the buttons. But when you have a dog you get to know them, and talk to them about the dog."

Jennifer Hollett lives in one of the new condo buildings in Regent Park, where they are planning a mixed-use park with a leash-free dog area. She doesn't own a dog, but supports having amenities for them in her area.

"To me that's the future of urban development," says Ms. Hollett, who ran for the NDP nomination in the federal Toronto Centre by-election last year. "I'm hoping to see it. ... Owning dogs is one of the few things that get strangers talking. It's an opportunity for your home to feel like a home and not just a box in the sky."

Mr. Vaughan wants developers to look at putting dog runs with "doggie bathrooms" on the roofs of the podiums that sit at the base of many condo towers, "not simply adjoining green space where people might want to go with a kid or just have a picnic, which is not always easily done if a dog has been using it and chewing up the grass or using the park as a bathroom."

Councillor Kristyn Wong-Tam has been pressing the city to encourage developers to provide on-site pet-care facilities.

"With only 52 off-leash dog parks and approximately 11 more proposed, the city's dogs may not have sufficient space to roam free as urbanization continues to cause damage to the natural environment," she wrote in a letter to the planning and growth committee this past year.

"We have to retrofit the neighbourhoods now," Mr. Vaughan says.

Menkes is putting a pet spa in at Fabrik, a condo project at Richmond and Spadina, and is considering putting an indoor dog run in a future project. "There's a project in New York that we looked at that has a dog run," Ms. Ng says. "It has been very popular and we just started to realize this could be a good thing here, especially in this climate."

A little more than four years ago, Suzanne Singh, 34, spotted a business opportunity at CityPlace.

She did an informal study using the number of registered dogs to estimate that there was an average of at least seven per floor. About two years ago she opened Pet Social, a retail and grooming centre in the condo complex. It caters to a number of dogs that live in CityPlace and nearby communities.

Now Pet Social has just opened a second location and Ms. Singh has two more in the works. The second one has a doggie daycare with a webcam for anxious dog owners who don't want to leave their dogs at home while they're at work.

"We were at capacity before we were even open," she says.

With a report from Bruce Laregina 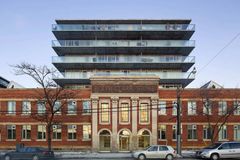