"I used to respect Norm Kelly. I have zero respect for him right now," Mr. Ford said of the deputy mayor, who was granted much of the mayor's authority, including most of his staff and office space, in a council vote last week.

The comments were the most recent in a string of criticisms voiced this week by the mayor and his brother after city staff presented the 2014 budget Monday, with a 2.5-per-cent residential tax increase that includes a 0.5-per-cent levy to fund a Scarborough subway expansion.

The proposed tax hike exceeds the mayor's target of 1.75 per cent. The mayor blamed the council vote for the jump in taxes. The city would need to find $18-million in savings to make up the difference, as well as millions in additional cuts in order to reduce the land transfer tax by 5 per cent, as the mayor has proposed.

But the mayor's budget chief, Frank Di Giorgio, says he and the Fords have differing views on the numbers. Mr. Di Giorgio said he met with the mayor on Tuesday.

"Let's say he was angry," Mr. Di Giorgio said, adding the mayor and his brother see the facts differently and are insisting the 0.5-per-cent subway levy was included in the 1.75-per-cent increase. "I don't remember things exactly the way they do."

The mayor's brother, who is vice-chair of the budget committee, criticized Mr. Kelly for suggesting to media that the mayor's target was pulled out of thin air.

"No one has even tried to find savings in this budget. Didn't even try. Norm Kelly wasn't part of the budget committee. He doesn't have a clue what's inside the budget. Not a clue," Doug Ford said, adding the city and deputy mayor need to look for further trims.

Mr. Kelly said he wasn't bothered by the councillor's remarks and he believes city staff did the hard work of looking for cost savings when making the budget, adding he was open to ideas for saving more money.

"I would invite Doug, who has an excellent record in business, to bring his recommendations forward […] If there's been some oversight, tell us where it was with precision and numbers attached to that."

Mr. Di Giorgio said he will look for further efficiencies, but doubts there is much staff have missed, and is expecting to take further criticism from the mayor and his brother.

Doug Ford's suggestions to bring down the tax increase included reducing the number of middle-management employees across departments through attrition, as well as rethinking the hiring of 479 new Toronto Transit Commission employees as proposed in the budget.

TTC chair Karen Stintz, a mayoral hopeful, said transit ridership is up 14 per cent over four years, but the budget has been frozen for three. "We cannot continue to starve the system for resources and meet the additional demand," she said.

She said that Doug Ford, as vice-chair of the budget committee, "should know better" than to ask for further TTC cuts. "They are campaigning on the backs of TTC riders and it is not in the interest of the city to do that," she said.

The mayor's brother also took some personal shots at Mr. Kelly and his fondness for historical references.

"I think Norm Kelly's more worried about living in the Roman days, you know, and how the Roman Empire worked. We're living in 2013."

The deputy mayor said he didn't take the remarks personally, telling reporters all is fair in the political arena.

"This is part of the sound and fury of the battlefield and you get used to it," Mr. Kelly said. 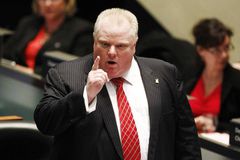 Bored with Ford: Is the media feeding frenzy finally over?
November 28, 2013 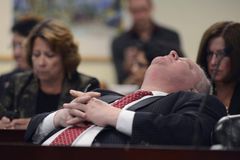 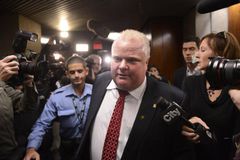 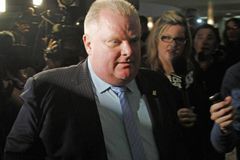 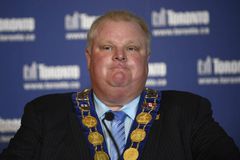 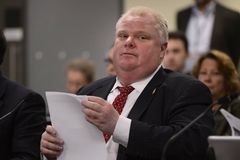