Doug Ford is leaving the door open on his political future, saying he will make a decision on whether to run for the Ontario Progressive Conservative leadership in "a couple of weeks" – and he is not ruling out the possibility of another attempt at the Toronto mayoralty.

A week after coming six points behind John Tory in the race to become Toronto mayor, the councillor made his first visit back to City Hall on Monday afternoon. There, a subdued Mr. Ford said he is "not 100 per cent sure" what is next for him, but he continued to muse about the idea of running provincially.

"In a couple weeks, I'll make that decision," Mr. Ford said. "It's funny. My wife's pushing me, my family's pushing me, Rob's pushing me, everyone's pushing me. I'm the only one who's kind of saying, 'Hold on, guys, let's think this out and make sure it's the right decision.' "

When asked about running against Christine Elliott, the wife of the late Jim Flaherty – a long-time Ford family friend – Mr. Ford acknowledged that it would be difficult. "Yeah, I love Christine, I love their family," he said.

But he spoke of the need to rebuild the party after the June election in which they were badly defeated. "What we have to focus on is not only rebuilding the base, but reaching out to the common, working-class people. … I think, as a party, we have a lot of housecleaning to do."

Mr. Ford also would not rule out the possibility of returning to City Hall. "Never say never," he said. "Would I come back as a councillor? No."

On Monday, Mr. Ford's brother, Mayor Rob Ford, returned to Mount Sinai Hospital, where he will undergo his third round of chemotherapy for liposarcoma, a rare and aggressive form of cancer. Because of the mayor's sudden illness, Doug Ford jumped into the mayoral race late, running what amounted to a 36-day campaign leading up to last week's election.

Mr. Ford said he spent at least "a couple hundred thousand dollars" of his own money on the campaign, but he does not regret the decision. "I just wish I had another week or so. I just couldn't cover all 44 wards – I couldn't cover them the way we usually do," he said. "It's all hindsight. I always say, 'Close only counts in horseshoes and hand grenades.' "

As for Mr. Tory, Mr. Ford said he wishes the mayor-elect all the best, but he cautioned the newcomer against being overly optimistic. "I think John got elected based on all getting along. He's going to have a rude awakening real quick," he said. "The first few meetings are going to be a honeymoon, but wait till he gets to year two."

Despite the turbulence over the past four years – including police and drug controversies involving the mayor – Mr. Ford said he is proud of the work he and his brother did.

"We hit a couple bumps in the road along the way … they were craters, canyons, whatever you want to call them," he said. "I'm so proud of Rob. Proud of the council that we were able to get the agenda through. We did a lot of good work." 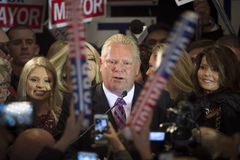 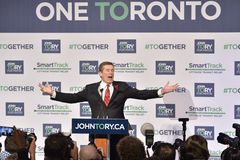 A chuckling Ford on his mayoralty: ‘It will definitely be remembered’
October 31, 2014 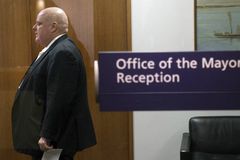