When Doug Ford started talking about a glitzy new project for Toronto's Port Lands, complete with monorail, mega-mall and giant Ferris Wheel, critics dismissed it as a back-of-the-napkin scheme from a suburban cowboy. It deserves a closer look than that.

In the past couple of days, other officials in the administration of Mayor Rob Ford have been fleshing out the preliminary plan, which will be presented to city council's executive committee on Tuesday. Councillor Michael Thompson, chairman of the city's economic development committee, says it would be a mixed-used "live, work, play" project including public space and parkland as well as high-end shopping. He says there would have to be some kind of "high-order transit," like light rail, to bring the crowds to the Port Lands, but not necessarily a monorail.

Councillor Peter Milczyn, a sensible architect who is chairman of the planning and growth management committee, says the plans being tabled on Tuesday are only a first draft and could easily evolve over time, taking into account the views of the public. "It doesn't mean we have a proposal that can go to market tomorrow," he says. "All it means is we're willing to take a look at whether we can attract significant development and accelerate the evolution of our waterfront."

To that end, the city has enlisted top-drawer architects and consultants, including Eric Kuhne of London's respected CivicArts group, to offer advice on what can be achieved. The point is that this is not just a foggy Doug Ford fantasy, though the mayor's brother is the driving force. The Ford administration is determined to speed up development of the Port Lands.

And why not? The 1,000-acre tract is perhaps the city's most underused asset. Minutes from downtown, with stunning views of the skyline from its western edge, it is ripe for development. The mayor's people say that international developers are salivating over the opportunities.

Chinese and Middle Eastern interests approached Waterfront Toronto about the Port Lands long before Doug Ford was on the scene. The people behind the London Eye, the British capital's colossal Ferris wheel, expressed interest in putting a wheel there, too. So that idea did not just spring from Doug Ford's imagination. It could be a hot tourist attraction – something to pull people to a city which, though a nice place to visit, has a shortage of big draws.

The critics says that by bulling ahead with his own plans, Doug Ford is throwing out years of painstaking work by Waterfront Toronto, from environmental studies to community consultations. But the agency's plan for rerouting the mouth of the Don River through the Port Lands would erase many acres of valuable land and cost more than $600-million.

With federal and provincial governments battling huge budget deficits, the prospect of securing that funding seems grim. The way things move on the waterfront, it could be 20 years or more before anything takes shape in the Port Lands. The city's intervention offers at least the hope of jump starting development and making something of this tragically wasted opportunity.

Despite the derisive and unfair remarks Doug Ford has made about Waterfront Toronto, it doesn't mean sidelining the agency, which has made great progress with projects like Sugar Beach and Sherbourne Common on the eastern end of the harbour. "That's great and they're doing a fabulous job," says Mr. Milczyn. Even if the Port Lands are taken away from the agency, it "has its hands full."

What it does mean is bringing in fresh eyes and new management to consider how to make something happen on the Port Lands. If we can look beyond the over-the-top musings of the mayor's brother, that makes good, solid sense.

Rob, I have a vision for the waterfront. Pass me that napkin
September 2, 2011
The not-so-funny truth about Toronto's Ferris wheel idea
August 31, 2011 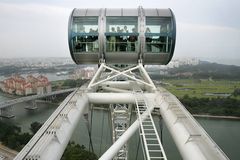 Doug Ford’s vision for the Port Lands includes giant Ferris wheel
August 30, 2011
new
Fords seek to revise waterfront plan that was years in the making
August 29, 2011
Follow Marcus Gee on Twitter @marcusbgee
Report an error Editorial code of conduct
Due to technical reasons, we have temporarily removed commenting from our articles. We hope to have this fixed soon. Thank you for your patience. If you are looking to give feedback on our new site, please send it along to feedback@globeandmail.com. If you want to write a letter to the editor, please forward to letters@globeandmail.com.
Comments