Provincial authorities are cracking down on careless and distracted driving. Their purpose, in part, is to protect vulnerable people such as pedestrians and cyclists.

Transportation Minister Steven Del Duca told a news conference on Wednesday that the Ontario government will bring in higher fines for distracted drivers and drivers who don't yield to pedestrians. It will also introduce a new offence of careless driving causing bodily harm, with penalties that would include a licence suspension of up to five years, a fine of up to $50,000 and even jail time of as much as two years.

That is good as far as it goes. It will send a useful message to motorists about the need to be alert at all times when they are in charge of a hurtling mass of metal. It will be a further caution to those dangerous nitwits who insist on checking that text while driving. It will help answer the cry for justice from families who have seen their loved ones mowed down by careless drivers while biking or walking, only to see the driver get off with a glancing fine or suspended licence.

In the end, though, after-the-fact penalties won't solve the problem. What is needed instead is a fundamental change in the way that drivers see themselves and the roads they travel. Most act as if they are masters of the roadway. All other users – cyclists who travel alongside them, pedestrians who cross the street in front of them – are interlopers.

Rob Ford summed up this attitude best in a famous rant at city council before he became mayor of Toronto. Talking about bike lanes, he said cyclists who took to the roads are "swimming with the sharks. Sooner or later you're gonna get bitten." Roads, he said, "are built for buses, cars and trucks, not for people on bikes. My heart bleeds for them when I hear someone gets killed, but it's their own fault at the end of the day."

That put it more bluntly than most people would, but, consciously or unconsciously, many motorists regard other road users as something in the way, an annoying, even maddening hindrance to their freedom of travel. It is that outlook that needs to change.

Cars have enjoyed a monopoly on the roads for too long. Before the explosion in car ownership, city roads were often shared among many users. You would see some people walking on them, some people riding horses, some people driving, some people taking trams. That, of course, could be dangerous, too, but at least there was some sense of shared ownership.

The rising dominance of the automobile changed all that. Engineers designed roads for cars alone, with pedestrians an afterthought at best and bicycles not even considered. The aim was to allow traffic to flow quickly and smoothly, with as little interference as possible from other travellers. From this grew the sense of entitlement that the late Mr. Ford reflected so well.

What it means in practice is that many drivers are simply not thinking of other users. To them, pedestrians and cyclists are in some sense invisible. Many drivers whip around the corner of intersections without watching out for crossing pedestrians. They speed through the crosswalk even when someone is waiting to cross. They don't check their right-side mirror for bikes when they make a turn or open a car door. The results are predictable and often deadly.

As The Globe and Mail's Oliver Moore explained in a report Tuesday on the government's plan to impose new, tougher penalties, "Over the past five years, more than 450 pedestrians and cyclists have been killed in motor vehicle collisions in Ontario's five most populous cities and on roads patrolled by the Ontario Provincial Police." In a 2016 Globe investigation, Mr. Moore calculated that the number of pedestrians killed in Toronto from 2011 to 2016 was greater than the number of fatal shootings.

The Transportation Ministry itself says in its press release that: "On average, one person is killed on Ontario's roads every 17 hours. In 2014, pedestrians and cyclists made up approximately 25 per cent of Ontario's road fatalities." Many of these deaths are perfectly avoidable.

Better rules and better engineering are part of the answer.

Lower speed limits, tougher enforcement of limits, better traffic signals, redesigned intersections, longer road-crossing times for pedestrians – all of these can make a difference. So, to be honest, can more caution by cyclists and pedestrians themselves. Though it's a pernicious myth that they are mainly to blame for their own fate, aggressive cyclists and heedless pedestrians don't make life any safer.

But the final responsibility lies with the men or women behind the wheel. The onus is on them to watch out for the vulnerable people on bikes and on foot all around them. That means learning to see themselves not as masters of the road, but as fellow users. 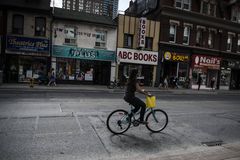 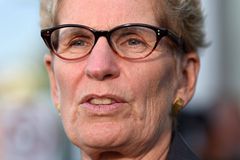 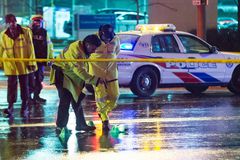