Skip to main content
JOHN LORINC
Special to The Globe and Mail
Published May 22, 2015

You’ve likely walked its streets: Before Nathan Phillips Square and Toronto General Hospital, a wide swath of downtown was known as The Ward: one of the city’s most notorious slums. Yet, writes John Lorinc, co-editor of a new book of essays and articles on the neighbourhood, Toronto the Good could not look away from the burlesque theatres, overcrowded rooming houses and ‘chop suey’ restaurants. Then we tore the whole thing down 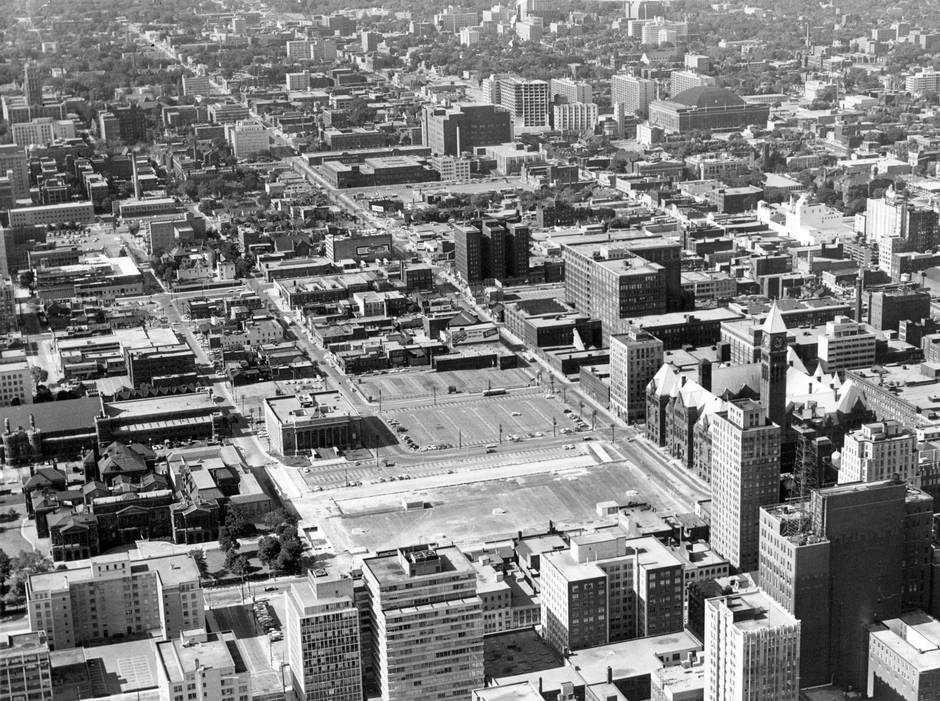 The Ward was one of Toronto’s earliest neighbourhoods, predating confederation. Most of it was razed post-Second World War, partly to make way for New City Hall. Jan. 8, 1959. (The Globe and Mail)

The money could scarcely have arrived at a more opportune moment.

In late 1845, John Strachan, the first Anglican bishop of Toronto, learned his financially struggling diocese had received an anonymous £5,000 bequest from England. The funds were to be used to build and sustain a new Gothic-style church to serve the poor. The donor’s will specified the pews must be “free and unappropriated forever.”

Strachan was a key figure in the Family Compact. Yet after the 1837 rebellion, he faced criticism over his affluent lifestyle and the church’s dominance. With the money, Strachan hired Henry Bowyer Lane to design the church, to be located in St. John’s Ward, on the site of an estate northwest of Yonge and Queen. Almost 50 years later, it was revealed that the mystery donation came from a young British woman named Mary Lambert Swale. Born to a family of wealthy bankers and lawyers, she married Hogarth Swale, a Yorkshire Anglican priest. Though they never visited Canada, the couple learned about Toronto from Strachan’s articles in an Anglican journal. Swale died in May, 1845, at the age of 25. The bequest had been part of her will, as was a similar gift to establish a place of worship for Australian convicts.

None of that backstory was known immediately after her death because Reverend Swale wanted the gift to remain a secret. When builders finished the Church of the Holy Trinity in 1847, writes Eric Arthur in No Mean City, “Strachan published a notice inviting ‘the poor families of the United Church of England and Ireland to make the church their own’ and another announcing the opening for service of the ‘Parochial Church of the Poor of Toronto.’” 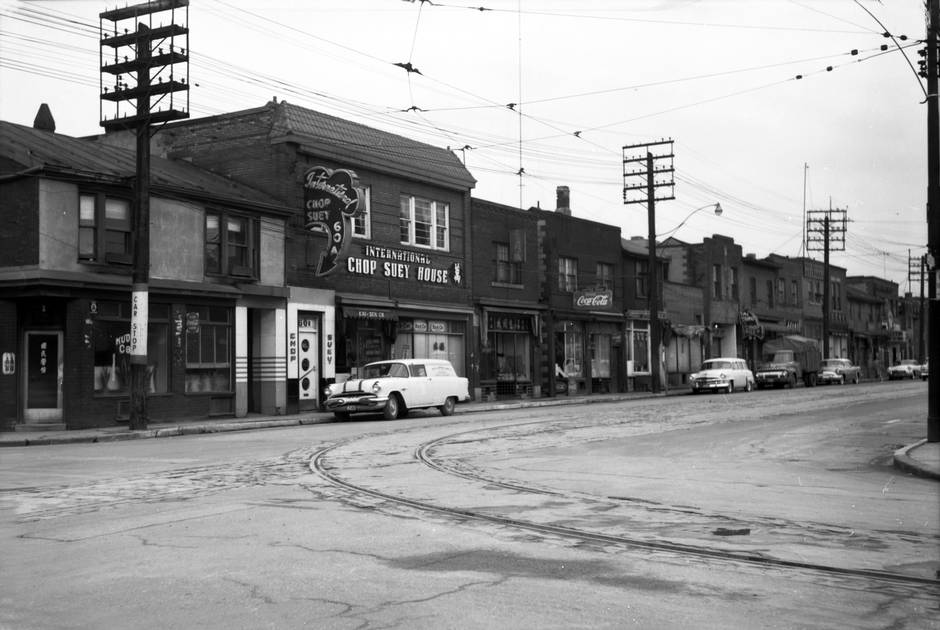 Elizabeth Street in downtown Toronto, April, 1955. (The Globe and Mail)

Long before St. John’s Ward came to be branded as Toronto’s most notorious slum, the working class enclave bounded by Queen, College, Yonge and University had a distinctive, diverse character. While Holy Trinity’s mission was to serve its poorest, the area was more than just impoverished.

“The Ward,” as the neighbourhood came to be known, was home to Irish immigrants and the city’s thriving black community, whose ranks included successful entrepreneurs, merchants and professionals. Many were escaped slaves who fled to Canada via the Underground Railroad and were drawn to Toronto for its reputation as a hotbed of abolitionist sentiment.

Those African-American immigrants in 1845 also acquired land for a church in The Ward, just blocks from Holy Trinity. When it opened, the British Methodist Episcopal Church, at 94 Chestnut St., offered services, educational programs and space for public meetings for members of the tight-knit black community.

Then, in 1847, another Victorian-era institution relocated to The Ward. The trustees of the “Poor House” – at Elizabeth and Elm, also blocks from Holy Trinity – dispensed welfare to destitute women and children, and forced men to break stones in order to receive their allotment.

Intriguingly, these three structures offered clues about The Ward’s future. Here was a complex, urban neighbourhood already characterized by diversity, poverty and upward mobility, as well as the presence of well-intentioned outside institutions that claimed to act in the interests of the locals.

What became of this community? In the 1890s, with Toronto’s economy surging, immigrants from Italy, Eastern Europe and China began to settle in The Ward. The area offered a supply of cheap rooms in crumbling wood-frame cottages.

The whole city was in flux. Between 1871 and 1911, Toronto’s population had exploded, from 56,000 to more than 376,000. Foreign-born residents accounted for almost 10 per cent of the population, many from non-English speaking countries.

With real estate speculation pushing in from all sides, Ward landlords had little incentive to upgrade aging buildings. But they responded to demand for inexpensive living space by erecting rough-hewn shacks and outdoor privies in The Ward’s litter-strewn rear alleyways.

The streets of this 'slum' teemed with newcomers who were visibly, audibly and culturally distinct. Today, one might describe the area using journalist Doug Saunders’s resonant phrase, 'arrival city.'

The streets of this “slum” teemed with newcomers who were visibly, audibly and culturally distinct. Today, one might describe the area using journalist Doug Saunders’s resonant phrase, “arrival city.”

In fact, that period marked a historic point of inflection – the moment when Anglo Toronto came face-to-face with ethnic diversity. The Town of York may trace its roots to Parliament and King. But modern Toronto begins in The Ward.

Public reaction was hardly sanguine. A 1905 Globe article fretted about an “influx of a large population foreign in race, speech and customs.”

Three years later, a less anxious Globe feature noted the proliferation of synagogues in The Ward, as well as night schools and shops:

The little rough-cast houses of Centre Avenue, Terauley and Elizabeth streets, from which three of four years ago the Irish wash lady wended her way to us on Monday mornings, where the Italian fruit vendor ripened his bananas under his bed at night, and the negro plasterer and barber gave colour to the social scene of a summer evening, have in these later days thrown their shelter over the oppressed Slavonic Jew.

Yet this tract of apparently impoverished exoticism drew not only waves of immigrants; the area also garnered attention from the city beyond The Ward’s well-defined boundaries. Toronto the Good simply could not look away. 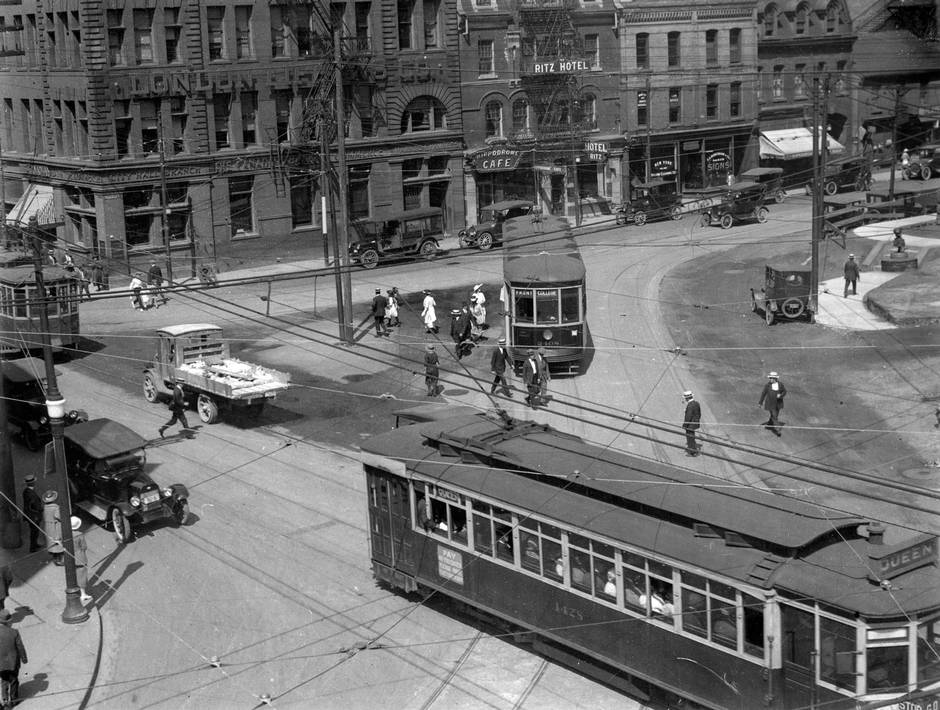 Need of an island or other protection at curve from Teraulay into Queen Street, in front of now-old City Hall in Toronto, July 1922. (TORONTO PUBLIC LIBRARY)

The Ward was also attracting interest from ordinary Torontonians. Audiences flocked to the vaudeville and burlesque theatres on Terauley and Queen. Onlookers crowded into the Elizabeth Street playground (located on the site of the new wing of the Hospital for Sick Children) to watch amateur baseball and youth festivals. By the 1920s, a growing number of intrepid diners ventured into The Ward for Italian ice cream or chop suey. Fortune tellers worked other Ward restaurants, such as Mary John’s, a popular café at Elizabeth and Gerrard. From the 1930s, artists settled in The Ward’s northern half, renting old cottages for studio space. In the 1950s and 1960s, those blocks became a precursor to Yorkville in its heyday.

Not all this interest was benign. Jewish peddlers and Chinese café owners were attacked by thugs. Meanwhile, the police prowled for bootleggers, gambling dens and merchants open on “Protestant Sundays.” There was more than a hint of moral panic. At one point, council passed a bylaw preventing white women from working for Chinese businesses.

News coverage, in turn, ranged from alarmist to intrigued. “Negros and Chinese seem to mingle well together,” a Globe reporter noted in 1922. “[T]he native Chinese restaurants are filled with negro customers, several of them women, while here and there an occasional white girl can be seen partaking of a meal with either a brown or yellow-skinned partner.”

Was the writer sending a dog-whistle signal to conservative readers, warning about mixed-race relationships or prostitution? Or was s/he merely recording something unusual about the way people from different backgrounds mix? Did such “sightings” subtly validate a form of social mixing that may have been taboo until then? And is this how ethnocultural acceptance in Toronto germinated?

It’s possible. But more strident calls for reform prevailed. Fretting about the “evils” of tenements, municipal leaders become preoccupied with the spread of New York-style slums. While he didn’t disparage poor immigrants, Dr. Charles Hastings warned Torontonians they were living in a “fool’s paradise” if they thought the city was immune. Less cautious headline writers slung around shrill words such as “canker,” “menace” and “human derelicts.” By the 1920s, nativist sentiment was palpable, much of it directed at The Ward’s growing Chinese population. As a 1922 Globe article all but shouted, “Moral leprosy spreads.” The message was clear. 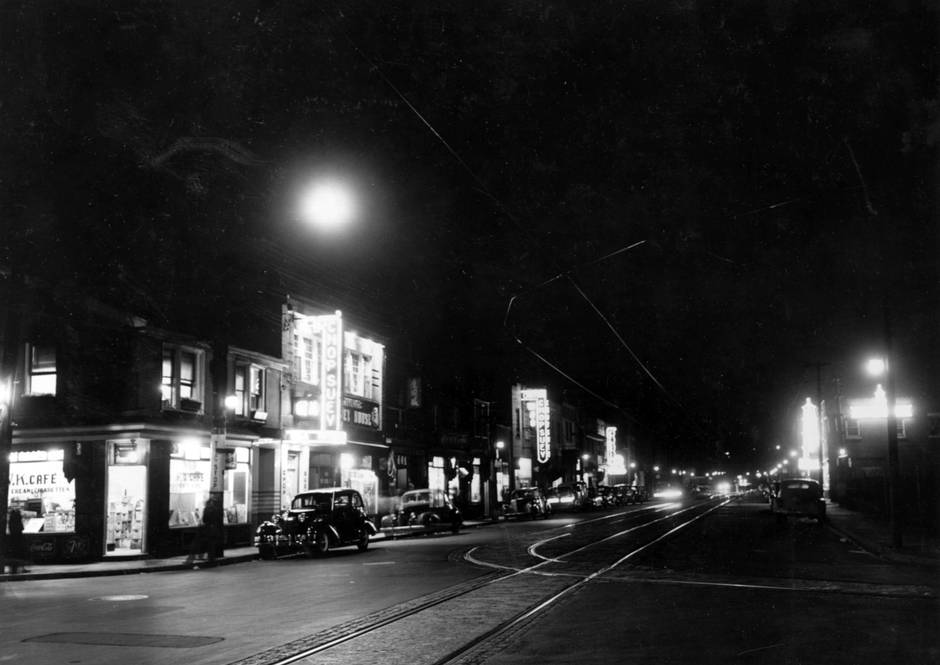 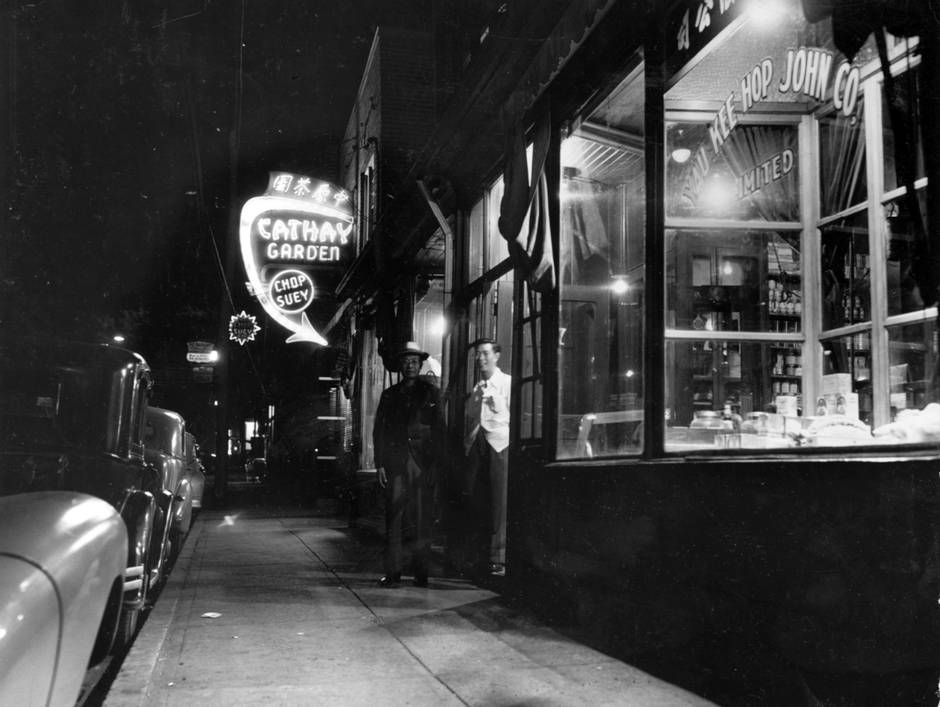 July, 1947: A summer night in Toronto’s downtown Chinatown, where the streets are mostly empty. (John Boyd/The Globe and Mail)

In time, all the anti-slum/anti-immigrant rhetoric inevitably hit the mark. Council in 1946 authorized the expropriation and clearance of the lower Ward, which at that point encompassed Chinatown. The process of razing, land assembly and redevelopment all the way up to College continued steadily until the 1990s, with office, apartment and institutional buildings (most notably City Hall, the Toronto General and Sick Kids) replacing almost all of the older structures, including stores, homes, synagogues, churches, theatres, cafés, studios, offices and Chinatown’s landmark restaurants, as well as a public school and a popular playground. Streetcar tracks were pulled up and several roads were cut or erased altogether, including the southern portion of Elizabeth, which had served as The Ward’s main thoroughfare for more than a century and, since the 1930s, Chinatown’s high street. In fact, the city combined several blocks of Chinatown into the parcel that would become Nathan Phillips Square.

Besides a handful of row houses on Dundas, Gerrard and Elm streets, as well as Holy Trinity and the Poor House, scant tangible evidence remains. (The British Methodist Episcopal Church was sold and then demolished in the late 1950s after the diminished congregation relocated to Shaw Street; the land where it stood for more than 100 years remains a parking lot near City Hall.) To find The Ward today, in fact, we must imagine our way back into a complicated world whose physical traces have been systematically expunged. Yet The Ward’s deeply compelling stories, and its wider legacy, remain woven into the fabric of a global city now defined by the diversity it first encountered well over a century ago, within a few cramped blocks of the downtown. Now, as then, we still struggle with questions about difference and deprivation, heritage and renewal, equity and political exclusion. 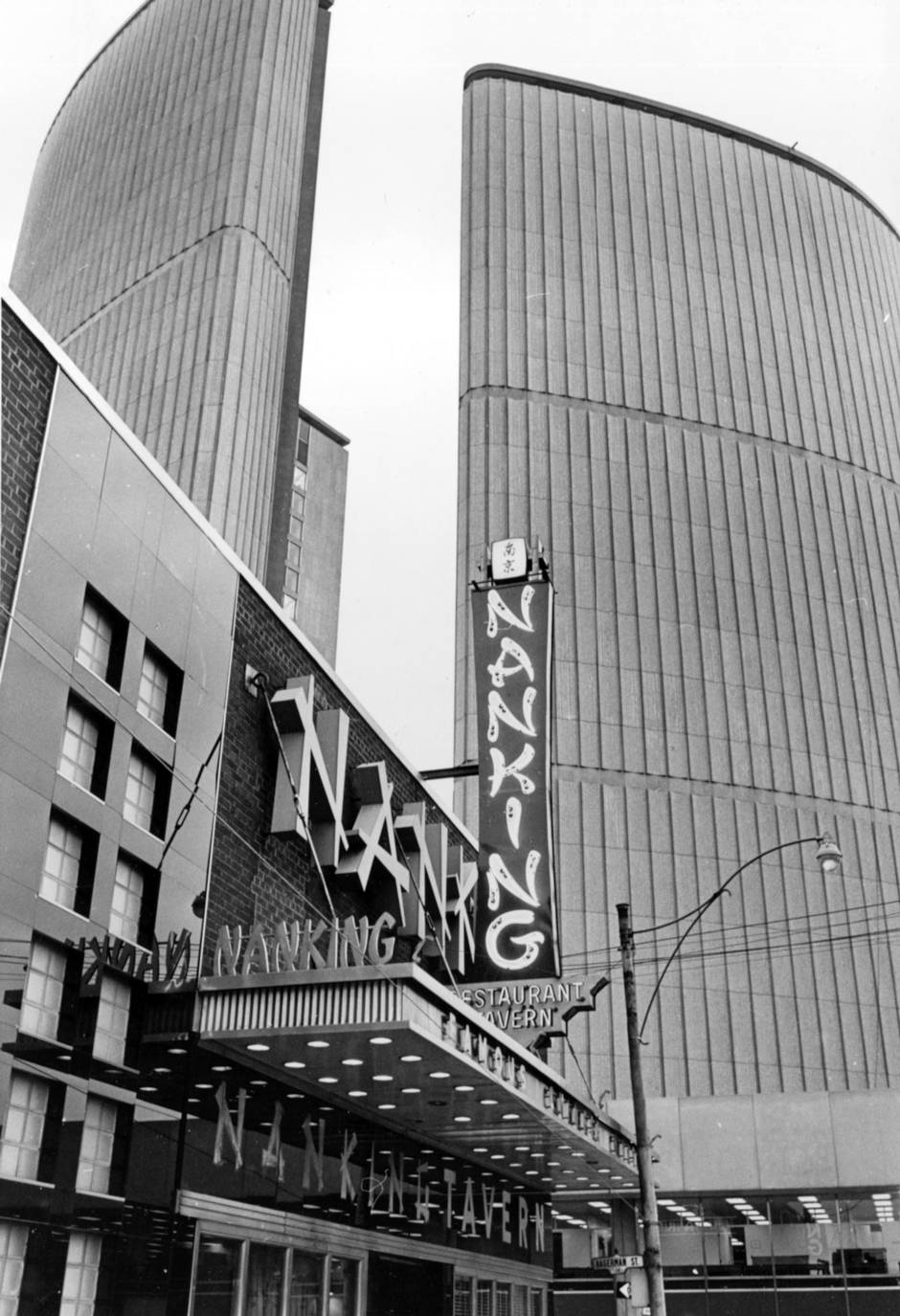 Nov. 19, 1965: Toronto’s new City Hall looms over Chinese restaurants on Elizabeth Street. The Nanking Restaurant and the rest of Chinatown is dwarfed by the twin towers rising to the south of it. (Harold Robinson/The Globe and Mail)