Toronto’s Maple Leaf Square, rebranded “Jurassic Park” for the NBA playoffs, was a sea of red, purple and white on Saturday afternoon as scores of Raptors fans gathered to watch their team take on the Washington Wizards on the first day of the NBA playoffs.

While a DJ, mascots and hosts entertained the crowd, chants of “Let’s go Raptors!” and “We the north!” were a common refrain.

We the North T-shirts and jerseys featuring Kyle Lowry’s No. 7 and DeMar DeRozan’s No. 10 were popular attire. 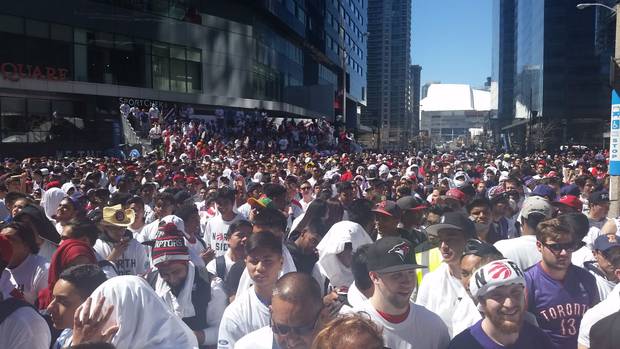 “I’ve always liked the Raptors since Vince Carter came,” said Dave Patullo, 26, of Woodbridge. “The Leafs aren’t doing well, so it’s a good time to be a Raptors fan.“ The fourth-seeded Raptors were 49-33 this season, while the Wizards were ranked fifth in the eastern conference with a 46-36 record.

Patullo thinks the Raptors will win in six games, but believes consistency will be a problem for the team.

“One night they’ll come out and look like a championship team and the next night not so much. If they can stay consistent through the playoffs they’ll have a shot at coming out of the east.” 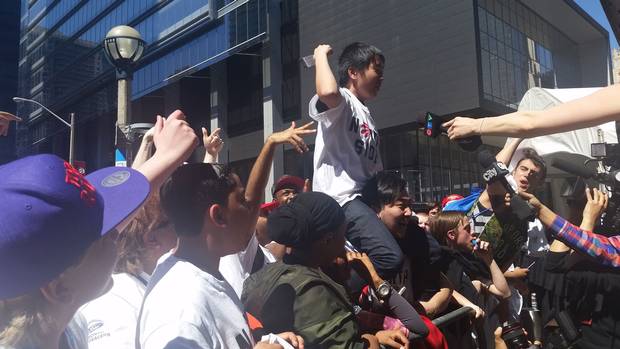 While the Wizards represent a new adversary for the Raptors, the team features a familiar foe. Paul Pierce, who helped the Brooklyn Nets extinguish Toronto’s playoff run last year now finds himself playing for the Wizards. Pierce was deemed Toronto’s “public enemy” after saying of the Raptors: “I don’t feel they have the ‘It’ that makes you worried.”

Star Raptor Kyle Lowry’s reaction to that was an abrupt “Yes, we do.”

Raptors GM Masai Ujiri’s response to Pierce featured more colourful language. “People want me to say something about Paul Pierce but, we don’t give a (expletive) about ‘it’,” Ujiri told a cheering crowd on Saturday.

Last year, Ujiri was fined $25,000 (U.S.) by the NBA for ending a speech by pairing an F-bomb with Brooklyn prior to the club’s post-season opening game against the Nets.

NBA commissioner Adam Silver attended Saturday’s game and was present when Ujiri addressed the Raptors’ faithful outside the ACC. At halftime, Silver told TSN that Ujiri’s comments were inappropriate.

“Actually I had walked outside with Masai and I was over on the side and we had jokingly talked about what had happened last year before I went out and I know it wasn’t his intention,” Silver said. “I’ve known Masai for 20 years, he’s a very emotional guy but it’s not appropriate in the league.